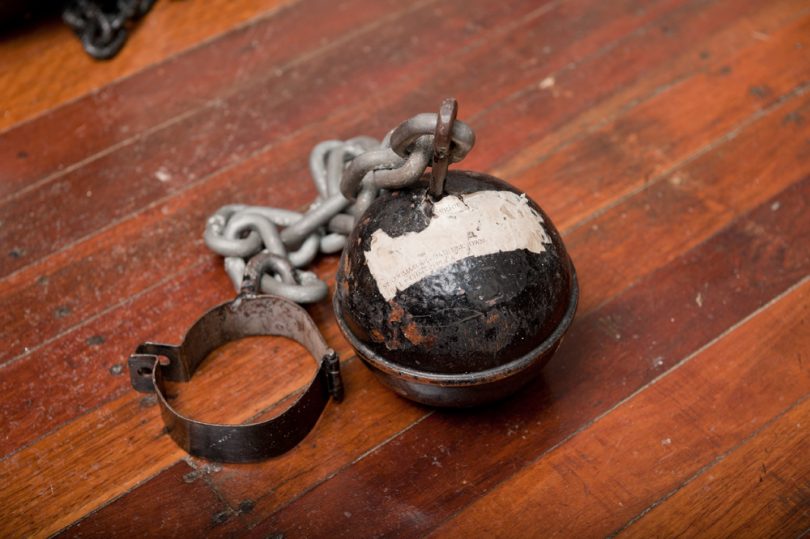 In the absence of high-security buildings, and particularly while travelling, early convicts were chained together and wore heavy balls like this one to limit the possibility of escape. Photo: Museum of the South East website.

There is something stirring about the fact that the NSW Corrective Services Museum in Cooma is attached to the actual Cooma Jail, where 200 prisoners are housed, some of whom make arts and crafts for the museum shop and act as tour guides.

It’s the only museum in the world in which low-security prisoners have this kind of contact with the public, as far as State-Wide Museum Manager of NSW Corrections Andrew Weglarz [pron: Venglash] knows.

Mr Weglarz says that employing prisoners as tour guides shows how the attitude to crime and criminals has changed over time.

“Up until the 1950s, there was the idea that criminals were born bad and the pseudoscience of phrenology was used to ‘prove’ it. We have death masks on display which were used at the time to show how the skulls of criminals were different – now they show us that criminals have faces, just like us.”

Mr Weglarz has seen firsthand the modern approach of rehabilitation in all but the most extreme criminal cases during his career in corrective services, first in his native England and, since he arrived as a skilled migrant in 2014, as the services and programs officer in Cooma.

“I’ve taught classes in prisons on drug rehabilitation, anti-domestic violence and worked on anti-social behaviours and I’ve seen it make a difference.”

Over the last year, Mr Weglarz has forged a working partnership with inmates from Brewarrina Correctional Centre, in north-western NSW, who now sell their homemade didgeridoos and clapping sticks at the Cooma museum shop, keeping 86 per cent of their profits. 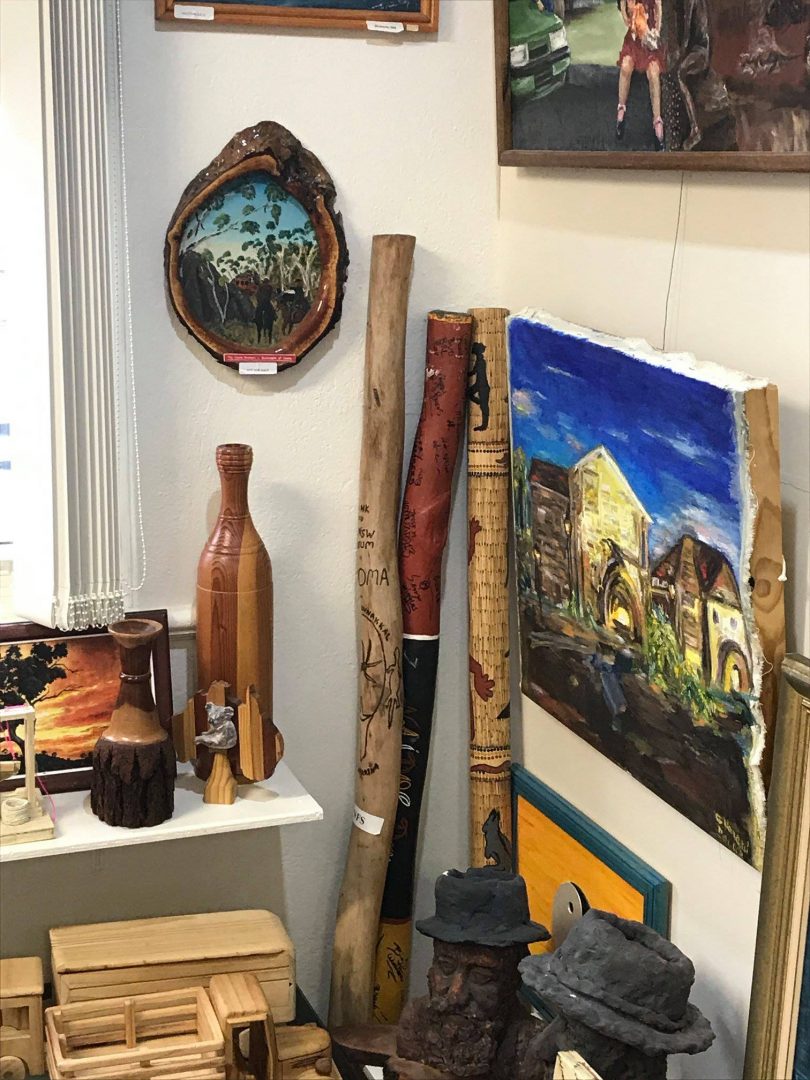 Instruments and artwork by Indigenous prisoners from an outback prison are sold in Cooma’s museum shop. Photo: Facebook.

The program was created to foster a connection between Aboriginal and Torres Strait Islander inmates and their culture but also teaches machining skills which will assist the artists in living a life outside the prison when they are released.

Passionate about Australia’s penal history, Mr Weglarz has visited all 40 jails in NSW since he became museum manager three years ago, sourcing a collection of artifacts which was recently valued at 2.2 million.

“I know many people think a prison museum might be a bit dull … uniforms and such so we’ve worked hard to make sure there are some surprises and that every display has a strong theme,” he says.

And now, with upcoming snow traffic in mind, he is pushing for the museum to be open seven days a week to allow as many tourists as possible the opportunity to see exhibits like the working gallows from Bathhurst, the bent bars of Mad Dog Cox’s cell window and an entire room filled with contraband items taken from prisoners over the years. 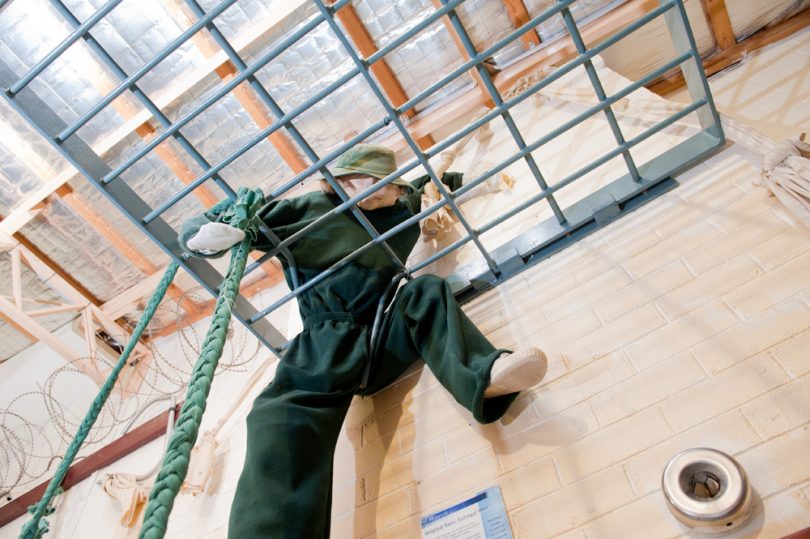 The cut bars in this exhibit are the ones damaged by ‘Mad Dog’s’ successful 1977 escape plan. He cut the bars over time under the pretence of doing chin ups. Photo: MoSE website.

South East Arts General Manager, Andrew Grey is particularly enthusiastic about the story of Russell ‘Mad Dog’ Cox, who, after breaking out the exercise yard with a hacksaw, was on the run from police for a decade and finally captured at a Melbourne shopping centre.

“You just can’t go past Mad Dog’s 1977 escape from Long Bay Correctional Centre as a contemporary criminal story- and the fact that you can pull the lever and make the trapdoor swing on the gallows outside the museum is just fantastic.”

Andrew laughs and adds, “from the macabre to the disturbing, there really is something for everyone.”

South East Arts ran the museum standards program, funded by Museums and Galleries NSW, in 2011 and the Corrective Services Museum was a participant under its previous director, updating the consistency, look and feel of its displays.

Now the museum and parts of its collection are featured among others across the Eurobodalla, Bega Valley and Snowy-Monaro on South East Arts’ funded online museum, Museum of the South East.

“In the case of the Corrective Services Museum, it’s not just ‘here’s our criminal history,’ it’s ‘here’s our history, here’s where European history in Australia began,” says Andrew. “We’re so lucky to have the corrective services museum for our whole state in our region – and also that it’s so unique in having this working relationship with prisoners.”

The museum is currently open Monday-Saturday from 8:30 am and 3:15 pm.

Martin Ross - 5 minutes ago
Steve Jones transport Canberra buses don’t have flashing lights. Only Qcity ones do. And the local private companies don’... View
Peter Ball - 4 hours ago
Gai Wil - So given that logic, a 5 kmh limit would be OK with you yeah? I mean, as you stated if you don’t speed (regardles... View
Peter Ball - 4 hours ago
At least I feel safer now, when crossing the road while updating my FB profile. 😜 Before the new limits, it was like Russi... View
Community 2

Daniel Duncan - 9 minutes ago
we are not out yet stop the fake news. View
Darcy Ryan - 4 hours ago
The only thing that kept people going during the lockdown was the federal government payments. View
Lifestyle 23

Simone Moss - 11 minutes ago
Sarah Moss,maybe you need some alpacas 🦙 View
Lucy Coote - 1 hour ago
Tom Gilbert uhhhhh I mean at least we wouldn’t have to mow the grass… View
Amanda Robyn - 1 hour ago
Suzanne Feeney. See. Alpacas is what you need. 😉 View
Sport 5

chewy14 - 3 hours ago
Capital Retro, You've claimed that nuclear power is the only economically viable alternative to coal. That is clearly not the... View
News 2

TimboinOz - 5 hours ago
What 'Romsey Quints' used to call 'muttering wrotters' are pretty boring folks most of the time. With the exception of Romsey... View
show more show less
*Results are based on activity within last 7 days

@The_RiotACT @The_RiotACT
Sally Hopman reckons there's no need to #write yourself off if you are struggling with #computers. Just pick up the heaviest thing handy - ancient Remington #typewriters are always good - and take aim at the laptop https://t.co/5SoyRLLAhU (28 minutes ago)