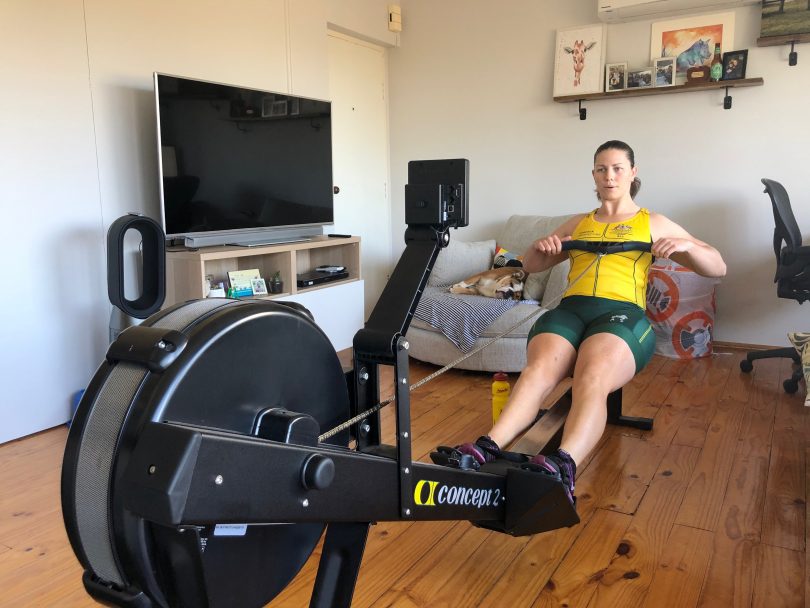 Nikki Ayers remains in training despite the postponing of the Tokyo Paralympics. Photo: Supplied.

Late last year I wrote about aspiring Paralympic rower Nikki Ayers. At the time she was in the midst of preparations to make a bid to represent Australia at the Tokyo 2020 Paralympic Games.

Plenty of water has passed under the bridge since then. The COVID-19 pandemic has effectively shut down sport. As a consequence, the Paralympics have been postponed until next year.

Nikki had come through crippling injuries suffered while playing rugby union in Canberra before shifting her focus to rowing. The Paralympics were her ultimate goal.

But as a registered nurse in the ICU at Canberra Hospital, Nikki’s sporting aspirations have taken a back seat.

“If that Paralympic dream is put on hold, so be it. This is far more important,” says Nikki.

With several roles at Canberra Hospital, including being on the floor and as a Clinical Care Co-ordinator, Nikki is concentrating on preparing for the possible surge in COVID-19 cases.

“We are preparing for what might be ahead. It’s a very anxious time among staff. We have seen what has been happening in Italy, Spain, the UK and the United States,” says Nikki. “We are waiting for it to hit here. It’s the calm before the storm and we are learning every day from the experiences overseas.”

Nurses and doctors globally have been praised for their selfless approach in attending to those affected by the virus. Nikki, who has been at Canberra Hospital for eight years, can’t speak highly enough about her colleagues and the roles they play in this crisis.

“We have a great team at work, everybody is supportive of each other.”

And Nikki has the mindset that is required in the current situation.

“I have a specialised skill set that the community desperately needs. I’m lucky that I can contribute.”

As for her Paralympic hopes? Nikki remains optimistic of securing a place in the PR3 Mixed Coxed 4 crew for next year’s Games.

“At the end of the day, I’m happy to have the Paralympics postponed rather than cancelled altogether. The goal is still there. The hardest thing is to stay motivated.”

She is doing what she can to keep fit in the absence of being on the water.

“I live in an apartment but I have an indoor rowing machine, weights and I cycle with my partner,” says Nikki.

As she prepares for what’s ahead in her vital front line role as a registered nurse, Nikki’s resilience in overcoming the odds in sport holds her in good stead. It gives her the perspective required to take on her medical duties with skill, enthusiasm and a positive disposition.

Simon Wheaton - 56 minutes ago
Reading reports from back then, he was even dodgier than our current politicians! "It might be noted, incidentally, that O'Ma... View
Lifestyle 16

Jennifer Brodie - 59 minutes ago
Are they selling tulip bulbs this year ???? View
Suzanne Mansfield - 6 hours ago
Karina Curwain rats and damn! View
Dawn Glover-Schwalm - 7 hours ago
Til Bijou me too!! View
News 32

Dave N Ange Greer - 5 hours ago
Why is there no comparable list of Queanbeyan region sports stars....? Also how many James Bonds have come from Wagga 🤣 View
Dong Wong - 6 hours ago
look at the face on the dog hahaha View
Alan Byrne - 6 hours ago
Keni Kawaleva all day bra View
News 222

Julie Macklin - 5 hours ago
Benjamañana Fergusunshine The neighbours on your southern side likely won't. View
Kelly McGrath - 6 hours ago
Christine Young my mother and father inks got “free trees” from the govt 40 years ago! We now have the 2 biggest gum tree... View
James Vetos - 7 hours ago
Quite a few comments about price per tree. Does the total cost include the planting of the tree and ongoing follow ups to wat... View
Property 14

Renee Thompson - 8 hours ago
Should be entitled to both as I see it as one is purely for helping keep business a float hoping they survive the outcome and... View
Opinion 20

@The_RiotACT @The_RiotACT
'Brave' Sally Hopman has seen her first #snake of the season, and it was enough to drive her to drink (so at least the experience wasn't all bad) https://t.co/I12xIs6Ftp (8 hours ago)