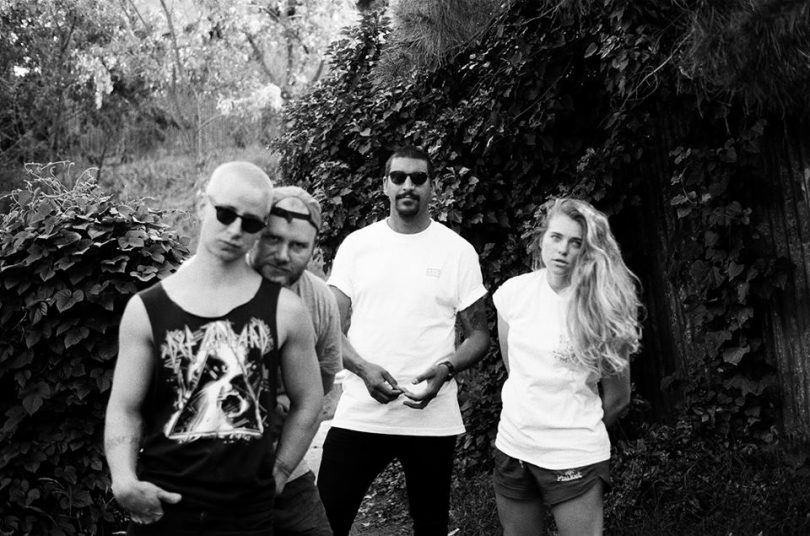 I kind of knew what to expect coming into this show. I saw Press Club open on The Smith Street Band’s UC Refectory show earlier in the year for the first time and was pretty blown away by how good they were live. I was pretty keen to catch them on a headline tour and with a lineup with two majorly-hyped bands like White Blanks and Sports Bra, there was a lot to look forward to.

Sports Bra opened the night to a pretty decent early crowd with a few folk getting down the front for them. In retrospect, they felt like an odd choice for the lineup, with a solid core of their following being in a quite different scene. Regardless, they played a hell of a tight set and hopefully won over some of the punters scattered throughout the room with their honest, emotive guitar pop. In addition to tracks from their excellent self-titled debut album, they played a handful of newer songs which all “slap pretty hard” which really builds anticipation for the new album they’ve recorded recently.

White Blanks are the kind of band I’m always unsure of how to wrap my head around when developing an opinion. Peddling Aussie surf punk in the same vein as bands like Hockey Dad and Skeggs (a genre I admittedly have little interest in), White Blanks are straight-up and honest in what they’re doing and trying to achieve. Due to my own biases against the genre, it took me a few songs into their set before I could get into it. They performed a tight set which gripped me better towards the end as the guitars took a Horror My Friend-esque turn and the stage presence sprung to life. Highlights include ‘Get Better’ and ‘I Don’t Want To (Die)’.

What else is there to say about Press Club that hasn’t been iterated much more eloquently by better writers? I am going to start very simply before going into any content of depth. This band is one of the best live acts going out there and front woman Natalie Foster is one of the most gripping in the country at the moment. I’d like to think the rest of the country is getting around the hype as the band played to a packed out Transit Bar crowd that was largely without any less-than-desirables and largely wholesome moshing/dancing.

As much as Foster takes up much of the stage with her energy and presence, it should not be forgotten how capable as musicians the rest of the band is. Guitarist Greg Rietwyk is hugely underrated as a guitarist after just looking at some of the riffs and melodies he can fit into this punk band’s sound while being the sole guitarist. Frank Lees and Rufio Macrae also make a solid rhythm section to back the band. Seeing them finish with their hit ‘Suburbia’ gave me chills as the whole crowd sang along. The only downside to this set is when they played a cover as an encore and it wasn’t their much-heralded cover of The Killers’ ‘When You Were Young’. Get around their album Late Teens and look forward to all the new hits they’re sure to bring out.