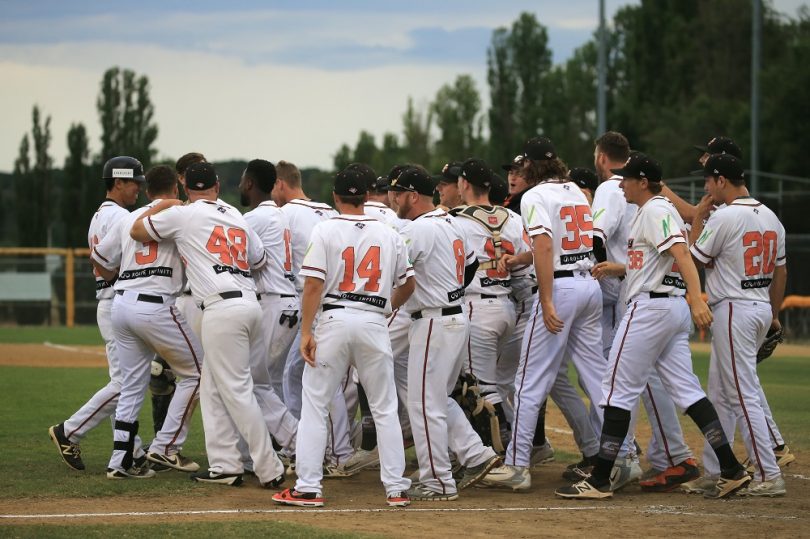 Can the Cavalry go all the way? Photo: SMPIMAGES.COM / ABL Media.

It may not quite be the World Series but the Canberra Cavalry’s looming clash against the Brisbane Bandits could prove just as meaningful if they come out on top.

The Australian Baseball League Championship Series kicks off tonight as the Cavs host the defending champions at Narrabundah Ballpark before heading to Brisbane for games two and three over the weekend.

Can the Cavalry claim their first title since 2013? Or will the Bandits complete a trifecta of ABL championships?

The Cavs faced off against Perth Heat in the semi-finals for the right to playoff for the Claxton Shield. The three-match series in the west got off to a poor start with Canberra going down 6-3 in the opener. However, the men in orange rallied to reverse that scoreline in game two before the sudden death showdown on Sunday. Inspired by the imperious form of starting pitcher Frank Gailey, who threw seven scoreless innings, the Cavalry’s offence clicked into gear and delivered a 3-1 win and a shot at glory.

Brisbane had an unorthodox route to the championship decider after their semi-final series was mostly washed out. Games one and two were called off and the rescheduled game one on Sunday afternoon suffered the same fate. Finally, a winner-takes-all game was able to go ahead later that day and the Bandits snuck home in a 9-8 thriller against the Melbourne Aces.

It is perhaps fitting that the ‘Kandi man’ looms as the Cavs’ key man yet again. Despite not taking the cavalry’s MVP award, Kandilas has been a consistent presence at the plate for Canberra all year. His tally of six home runs shows an ability to single-handedly change a game in the blink of an eye. The Cavalry will be hoping he has a few of those moments over the weekend.

Sutherland ultimately proved the difference for the Bandits in their semi-final with his walk-off home run in the ninth innings, winning the game for his side. The first baseman boasts a solid .356 average and his ice-cool display last Sunday could well be needed again if his side is to clinch the title.