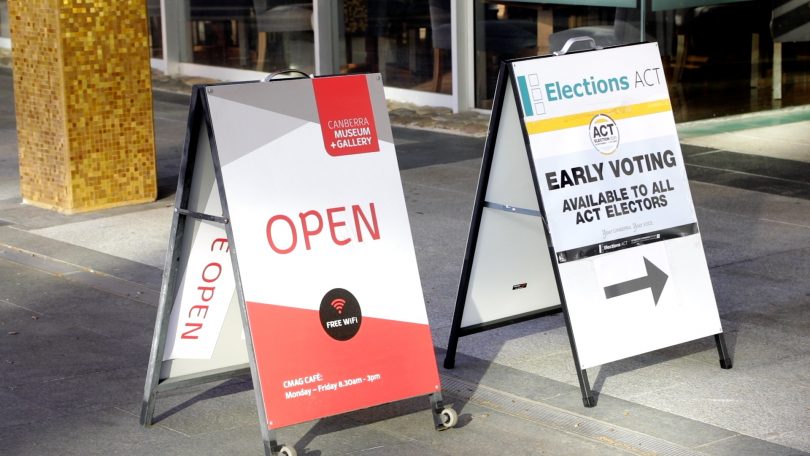 Should 16-year-olds be able to vote? Photo: Region Media.

Readers are not happy about the mixed messaging around COVID-19 testing for those who are not symptomatic, according to this week’s poll.

Region Media was the first to reveal that people who required tests for interstate travel or entry into nursing homes might face charges from ACT Government testing clinics.

There was much to-ing and fro-ing from the government amid accusations that they had been caught flat-footed after spending months urging Canberrans to get tested for optimum surveillance results.

Eventually, it was clarified that individuals who are required under a public health order to return a negative COVID-19 PCR test to travel interstate would not have to pay for it, as long as the other jurisdiction will allow them to enter with just a text message as proof of their COVID-negative status.

Health Minister Rachel Stephen-Smith said providing a negative COVID-19 certificate has previously attracted a $112 fee, and this has been in place since the beginning of the pandemic last year, although it was unclear if the Commonwealth had jointly funded the cost of the test itself.

We asked Should all COVID-19 tests be free? A total of 1457 people voted and the results were strongly skewed.

Your options to vote were No, we’ve moved on and government funds aren’t limitless. This received just 16 per cent of the total, or 226 votes.

Alternatively, you could vote Yes, it’s an important public safety measure. This received 84 per cent of the total, or 1,231 votes.

READ ALSO: Should 16 and 17 year olds be given the vote? They think so

This week, we’re wondering whether the right to vote should be extended to people younger than the current 18 year age limit.

The ACT Greens have introduced a bill into the Legislative Assembly which would give the right to vote to 16 and 17-year-olds. A recent survey by the Youth Coalition found the majority of young people support extending voting rights and the cause is a long-running one for the Greens, who first introduced similar legislation as far back as 1996.

Opinions on the proposed legislation were mixed, although some supported a voluntary option.

“You’re also considered mature enough to join the military at 16 years and 6 months. The question should then be asked whether you should have a say on who gets to send you to war if/when the time comes”.

But Linda Stapleton wrote: “16 and 17-year-olds have enough to deal with in life, school, learning to survive teenage years and school, parents and social life, without throwing them into a world where they then have to decide what to do about the world. Yes, learn, have an opinion, but keep the pressure of being an adult off them for just a bit longer. Let them enjoy their teens.”

RiotACT have the wrong poll question, it should be “Should we give 16 and 17-year-olds the right to vote, stand as candidates and sit in the Assembly”.

Greens need to clarify if their push to extend voting for 16-17s also includes standing in elections, and RiotACT should ask Greens to clarify this.

I think it would be appropriate to have registration to vote for the 16/17 year olds voluntary. If they want to vote, they can register and then it becomes compulsory. If they don’t want to, then they don’t register. I don’t think something magic happens between the ages of 17 and 18 to make 18 year olds suddenly adult. It might be worthwhile having that two year period where the proto-adult can think about the process if they haven’t already thought about it before.

The argument that some 16-17 year olds work and pay tax, therefore all 16-17 years should be able to vote, is ridiculous.

The vast majority of 16 & 17 year olds still live at home with their parents. It’s the parents who pay the rent or mortgage, rates, electricity, gas, car rego, insurances etc.
At best, the 16 or 17 might pay some board and pay for their own Maccers.

The Greens wouldn’t be proposing this change unless they believed there were seats up for grabs.
If the ALP supports this proposal they’d be fools because they could find themselves as the junior partner in the next Greens/ALP Government.

I think the notion about them working, is more about them being independent; they can make their own choices. Worth noting that they use government base services. Why shouldn’t they be able to be part the election process?

Tbh, I think most people who have been against the idea, are more concerned about votes swinging left. Maybe the real way of stopping that is for the right of politics to also be concerned about how young people feel.

Rauny Worm - 29 minutes ago
maybe if he lived here, where billionaires don't pay tax anyway and there is no expectation of corporate giving( except to ce... View
Aaron Fenning - 55 minutes ago
Rules are rules View
CaptainSpiff - 1 hour ago
Really? The PM is on record the day before he arrived, saying his visa was a matter for VIC gov. And the federal border force... View
Lifestyle 20

Grog Yogurt - 46 minutes ago
Paul South so did I, worked there for 5 years. Late 1990 from memory on a Tuesday evening (tight arse Tuesday at the movies)... View
Community 105

Linda Stapleton - 56 minutes ago
Leading up to Summernats it got noisy around here. The hoons started with their fun and games as they saw it and the police t... View
Dee Tee - 3 hours ago
Plenty of notice to book a holiday in advance to get away View
Beck Bonazza - 4 hours ago
Micheal Anderson Spot on! View
News 3

Capital Retro - 2 hours ago
And this is a natural occurrence, about every 50 years. Next Canberra bushfire disaster due about 2050. View
phydeaux - 2 hours ago
Except that the ember attack critically affecting Duffy, where most houses were lost, was from the then adjacent pine forest,... View
Alex Kay - 3 hours ago
Fay Dickie move then, that huge tree was probably there well before you View
Opinion 139

Capital Retro - 9 hours ago
A lot of crime in my neighbourhood has certainly been reported, some serious home invasions included but the police media hav... View
show more show less
*Results are based on activity within last 7 days

Shoppers might be contending with increasingly bare shelves as increasing numbers of workers find themselves in isolation due to COVID-19,...
Opinion 52

@the_riotact @The_RiotACT
ACT Health has confirmed 1467 new #COVID cases, a decline from yesterday's inflated figure of 1860. Modelling has suggested #case numbers may have peaked under the most likely scenario https://t.co/ZPVclyuGlF (4 hours ago)