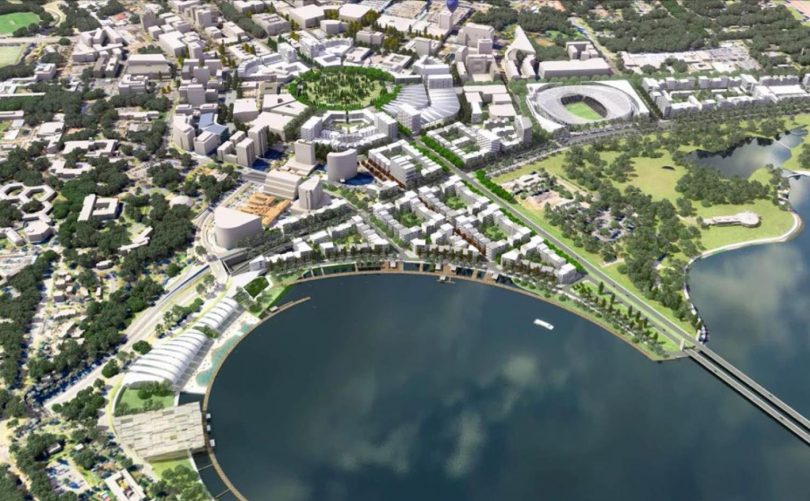 West Basin will be developed following a land swap with the NCA. Image: File.

It’s been a dramatic week of COVID-19 crisis developments as the virus spreads rapidly around Australia. Here in Canberra, ACT Health is insisting that they have been able to trace the source of infection overwhelmingly to overseas travellers and close contacts.

They say there is no evidence of community transmission at this stage, although health minister Rachael Stephen-Smith and chief health officer Dr Kerryn Coleman both conceded it was inevitable and that the government needed to prepare for that eventuality.

Schools have been a central point of tension as the Commonwealth continues to insist that they are safe while the states urge all schools to close, an argument that’s now extending to the discussion around childcare centres. In the ACT, government schools are currently on pupil-free days until the school holidays.

We asked you Is it a good idea for schools to close in response to COVID-19?

But while the crisis continues, everyday life does, too. The ACT Government and the NCA made a quiet announcement this week that they had agreed to terms that will enable the always controversial West Basin land swap to proceed.

The NCA revealed on its website that the Commonwealth had secured land in Curtin for the expansion of the ACT’s diplomatic community, either to build new embassies or residences over the next 25 years. The area in question is the North Curtin horse paddocks, and the ACT Equestrian Association says they were blindsided by the deal which will carve off 70 per cent of the land.

The other 30 per cent fronts Yarra Glen on the proposed light rail Stage 2 route to Woden and would be prime land for development along a public transport corridor.

The deal also clears the way for the planned redevelopment of the West Basin area on Lake Burley Griffin in the city, where the building of up to 2000 apartments has been flagged.

The City Renewal Authority’s next planned stage includes reclaiming the 2.8 hectares of the lake bed to expand the boardwalk, followed by building another lakeside park, landscaped public spaces and eventually residential development.

The deal won’t happen immediately: the Equestrian Association and users have until 2022.

Colette Raison said: “Don’t agree with infilling. Used to have horses in the Curtin paddocks. Came home from school. Walked up and had a ride. Great community then. Canberra WAS a bush capital. What happened?”

But Chris Cross didn’t agree, saying: “Outrage?? Makes perfect sense! Better utilise the land that is so close to the city and get rates from all the new diplomatic residences that set up there. Do it yesterday!”

Perhaps we could earmark a less prominent hectare or two for a toilet paper factory.

Does the swap mean the horses will be stabled in apartments at West Basin?
Does this also mean the ‘wireless’ tram in this area could be horse drawn?

Chris Cross' pro argument citing the rates income from diplomatic missions is a highly contentious issue as the concept seems to infringe on the Vienna Convention on diplomatic relations and might therefore not hold up in the long run...

A great idea for space that’s used for sweet FA.

Gees the Barr govt shills are hard at work on this articles comments.

If you love a totally concrete Canberra...

This is great for Canberra's evolution

And surprise surprise it’s announced at a time when no one can meet to protest this underhanded, sneaky land swap which is typical of this Government. 😡

Elroy Jones do you have a vested interest in this.. there are far more worthy infrastructure projects such as new hospitals, convention centre for the good of the public and not for a money hungry developers

Nasty. I’m all for development. I have lived in Canberra forever and my father was a developer that contributed to the building of this beautiful city. However rows of high rise on our lake front is not for “all the people”. Just for the wealthy few. Happy to see Acton developed (that is what it is called now, not West Basin) but with parks and open spaces, cafes etc wide bike paths and walkways. Something for everyone. 😊

Elroy it is unusual - unless your stirring, that you feel we don’t already have a lot of development going on in Canberra - our entire city has undergone restructuring, a new rail, developments by the lake, not to mention the popular ‘urban infill’ - why is it you feel we are being ‘held back’?

Bill Pappas a new hospital is on its way in Woden and another one was built last year. No vested interests other than making Canberra better

Oh look, there’s a new stadium. I guess this is a form of consultation

There has literally been years of consultation on the stadium.. This is an old image of the city to lake (which should have happened) now on ice because of this city's massive population of sooks.

Elroy Jones so you will prefer to go against the masses and do whatever you want.... go to nth Korea and ask the people there

Canberran's want this development. This is an exciting time for our city. Also crunch time for the government to show they can deliver a world class development.

Chris Tony I completely agree with your statement. We cannot wait for West Basin redevelopment 👍🏼

Sophia, not involved in the industry at all. Just care about Canberra wanna see it get better and better

Completely agree Chris and totally not involved in the industry.

Chris Tony I don’t think rows of apartments blocking the lovely vista from Commonwealth Avenue Bridge to Black Mountain is an improvement. Just saying🤷‍♀️. Have you seen the plans - terrible. I love CANBERRA and have lived here all my life. Not against development at all but West Basin (which is now called Acton btw) should be for low level development not high rise. Enough high rise happening in the burbs.

Sophia, the lovely vista. West Basin is a dogs breakfast. Just saying. Can you give a link to the plans please.

Candace Aitchison - 7 hours ago
Lucy is amazing!! Such a beautiful young lady! It’s always such a pleasure going into the chemist 🙂 Congratulations Lucy... View
Anthony Crocker - 13 hours ago
I’ve always found her very helpful, friendly and knowledgeable. Congrats 🥳 View
Phyl Oliver - 14 hours ago
Congratulations Lucinda, you are at the best chemist ever! View
Sport 5

There are concerns for the welfare of a missing teenager who was last seen in the Amaroo area. ACT Policing...
News 21

Probing the polls: the West Basin land swap and deferred or reduced rentals

@The_RiotACT @The_RiotACT
In this week’s RiotACT newsletter: which Target stores are closing? What’s the latest COVID news? Why are Braidwood’s historic trees set for the chop? Catch up here https://t.co/7vn958SSUV (11 hours ago)