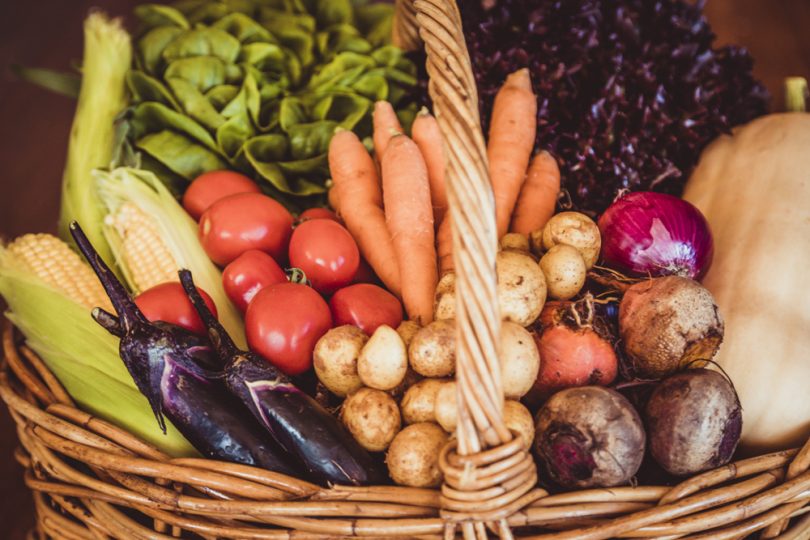 The best thing consumers can do is keep buying local produce. Photo: Supplied.

While the smoke has cleared and the rain has finally come, that is not the end of the problems for our farmers. Supply has become a big issue for fruit and vegetable producers.

“The drought was hitting the supply of fruit and vegetables well before the fires came. Before Christmas suppliers were warning us that it would become hard to get hold of even some fruit and vegetable staples. With the weather patterns disrupted, growers are telling us that they will be planting less in the coming seasons as well. Putting it simply, our climate has changed and it is affecting our food supply,” Ms Stewart said.

“At the moment we have lost one of our big avocado suppliers to the fires, it is impossible to buy English Spinach and fruit prices have increased over 6 per cent in just the past few weeks.”

Ms Stewart urged people to support local producers and help them recover from the unprecedented conditions.

“It can be tempting for consumers to take the easier, cheaper path and buy imported fruit and vegetables from the big supermarkets but if we do not support our growers during the tough times, they may not survive,” she said.

“The best thing people can do is be flexible, know that there are some items you can’t get at the moment. You may pay a little more but you will still be getting quality Australian grown food and supporting Australian growers.” 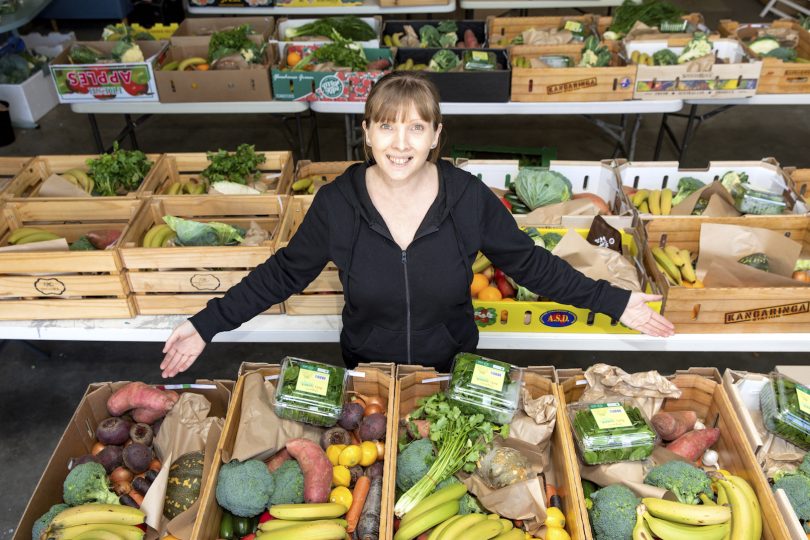 “If we do not support our growers during the tough times, they may not survive.” – Claire Stewart, ARC Organics. Photo: Region Media.

One local supplier doing it particularly tough this season is Prana Produce, located just outside Braidwood. John Carroll and Christina Jagusiak started the business in 2015, growing produce, running workshops and creating store products such as beeswax wraps, soap and dressings.

But Mr Carroll said the past year has been a challenge. 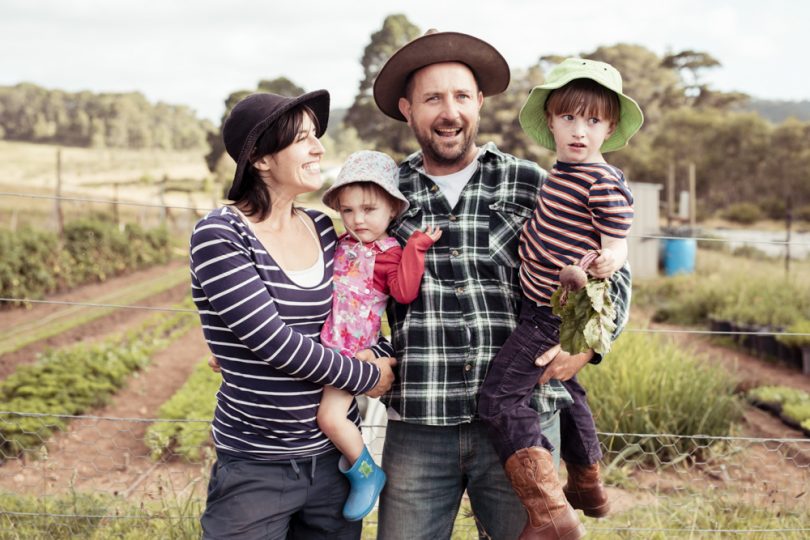 Prana Produce owners John Carroll and Christina Jagusiak with their children on their farm at Monga. Photo: Supplied.

As if drought and fires weren’t enough, road closures were also a significant blow for the region and their business.

“We are 60 per cent down in our takings for the season. Braidwood relies heavily on tourism but obviously that didn’t happen this summer. The restaurants had no customers so they were not ordering produce from us,” Mr Carroll said.

Compounding their problems, he said insects have been an issue this season.

“It has been hard to grow leafy greens. I have never seen so many insects. We certainly have had some challenges.”

But Mr Carroll said he is an optimist.

“You’ve got to be or you wouldn’t survive. We have put our heads down and kept going. The fires came awfully close. At one stage we were stationed across three hills, radioing in when the fires were approaching. But we were lucky and our property was not directly impacted,” he said.

“The rain has come, which is great, and our dams are overflowing. Just a few weeks ago we were wondering if our bore was going to stop like it had for many other farmers in our area and now I have a greenhouse full of tomatoes with mould issues.”

As if all that wasn’t enough, Mr Carroll said he had planted a field of seedlings ready for the next season and some local wood ducks moved in following the rain and helped themselves.

“You do pay a price sometimes but the fires have gone, we have water and we are in this for the long haul. We have invested in infrastructure on our farm and we are determined to keep growing our business.”

He said the best thing consumers can do is keep buying the produce.

“It doesn’t matter where you buy it from. You don’t have to buy it direct from the farm gate, just keep buying quality, locally grown food and support farmers and suppliers.”

Gail Vest - 43 seconds ago
Sharee Schultz it's just that Margaret Freemantle wrote: "since we’re speaking on behalf of ALL other Canberrans"..... whic... View
Melanie Wisefisherman - 1 hour ago
The problem with politics is that politicians treat it as a competition with the only goal being to gain and maintain power.... View
Sharee Schultz - 3 hours ago
Gail Vest how does she know ‘most’? Did she do a survey? 🤔... View
Opinion 12

Rusty Baird - 54 minutes ago
Lisa Shiels The truth hurts a little doesn't it?! View
Shane Westmore - 2 hours ago
there's plenty of reason not to have kids... when there's a lack of arable land & food shortages, the world will sort it out View
Lisa Shiels - 2 hours ago
Rusty Baird shame your parents didn’t! View
Food & Wine 9

Capital Retro - 2 hours ago
No photo ID required, not even a password. The result is nothing will change regarding the "vote early, vote often" mentality... View
Robert - 3 hours ago
Evidence from the US has shown that electronic voting without a paper trail is fraught with the possibility of fraud. While e... View
Food & Wine 49

Leanne MH - 4 hours ago
Rik MP whaaat! I could get some stuff from Bunnings and build it for far less. It better have a pool and spa for those sort o... View
Rik MP - 14 hours ago
Leanne thats excessive View
News 95

Jake Annetts - 11 hours ago
Bundy Pados ah typical of me to miss the joke. Sorry. But rest assured there are many womby helpers. I know a few who raise a... View
John Coleman - 14 hours ago
Ian McTaggart conversely, we could see something in the fact Andrew Wall, who had no signs out, has likely lost his seat to T... View
News 13

Jacob Moir - 13 hours ago
Lesley going to try these? View
Michael Brennan - 14 hours ago
Danielle Lucas sounds fantastic. Will add it to the list of weekend getaways. View
show more show less
*Results are based on activity within last 7 days

It's done. It's dusted. It's finally over. The 2020 ACT election is behind us, but many Canberrans are still expressing...
News 66

Make no mistake, the ACT election result is a disaster for the Canberra Liberals, and one that has to be...
Opinion 88

When I was at university, I worked casually at a pharmacy in an outer suburb of Canberra. The owner and...
Food & Wine 49

19 October: 11.00 am  What just happened in the ACT election? It’s the morning after and Genevieve Jacobs is with Professor...
ACT Election 27

Arc Organics puts the taste back in real food

Renters urged to speak to their agent if times get tough

Market growers keep their cool in a scorcher

@The_RiotACT @The_RiotACT
Electronic voting looks the way of the future after a smooth ACT election, and fast and efficient count on the night https://t.co/fbtfjUdhxT (1 hour ago)

@The_RiotACT @The_RiotACT
Zoya Patel asks, is it irresponsible to bring children into the world when we know the effects of climate change are only going to worsen? https://t.co/4tPVl5d9qL (4 hours ago)

@The_RiotACT @The_RiotACT
Whether it features big festivals, intimate sit-down affairs, or live streamed events, CBR’s musical future is up in the air & ready to be shaped. Read more in our latest #GigGuide https://t.co/qoB8BtF5NB (13 hours ago)