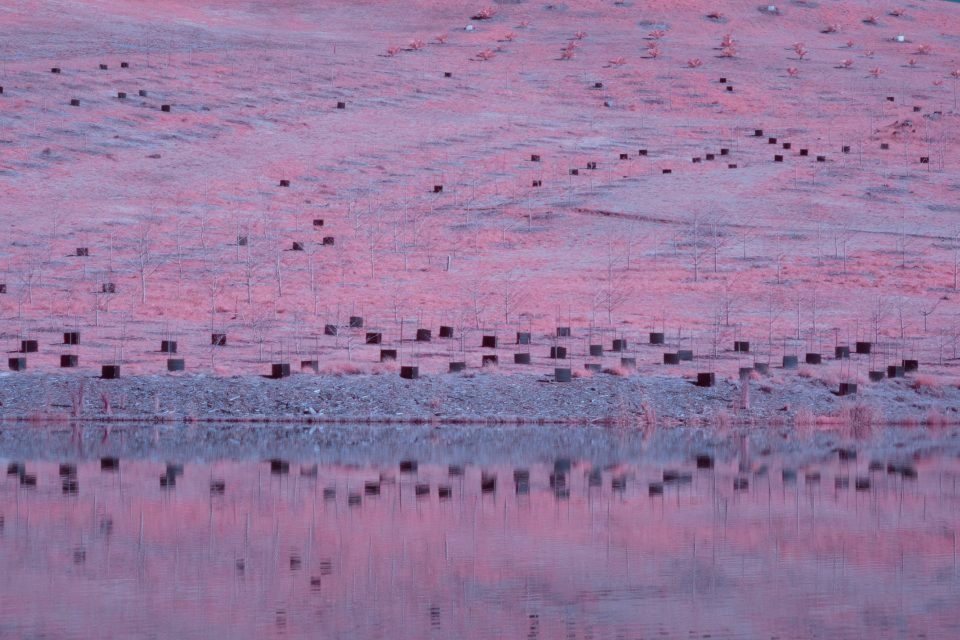 See Canberra as you’ve never seen it before through the lens of a local infrared photographer.

Observing the bush capital in the infrared spectrum is like stepping into an alien world, or a child’s fairy-floss dream.

“I love how images look quite similar to what we see except with slightly different colours,” he says.

“As if it’s a world in an alternate universe.”

Typically, the spectrum of colours humans can see is in the 380 to 700 nanometre wavelength.

But infrared photography reveals colours not able to be seen by the naked eye – above 700 nanometres in wavelength.

It’s an underexposed artform that shows Canberra in a whole new light.

“I like this kind of photography because of the alien landscapes that come out of the camera,” says Tom.

“Scenes that you can see with your eye look completely different, and most of the time they’re better.” 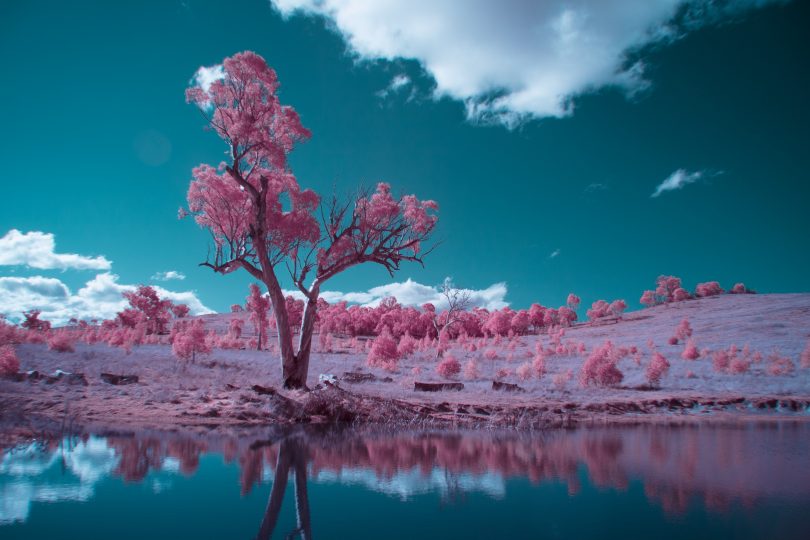 The familiar yet alien images of Canberra are like stepping into an alternate universe. Photo: Tom Gane.

Tom got into photography after he graduated from school around two years ago.

Soon he was dabbling in astrophotography – capturing the beauty of the night sky, the stars and the Milky Way.

About eight months ago he saw a fellow Canberra photographer using infrared and he was hooked.

“The higher the number, the more different the world looks through the lens,” says Tom.

“I’d describe it to someone as ‘psychedelic photography’.”

READ ALSO: Capturing images of real life in the most extraordinary of times

“People seem to really enjoy the images,” he says. “I mainly share my infrared images on Reddit and Facebook, where they’ve received quite a bit of attention.

“I think I can confidently say the general public enjoy it.”

Tom hopes when people see the images they will share his feeling of viewing the world a little differently.

“I love that these images entertain the possibility of another universe quite similar to the one we live in,” he says. 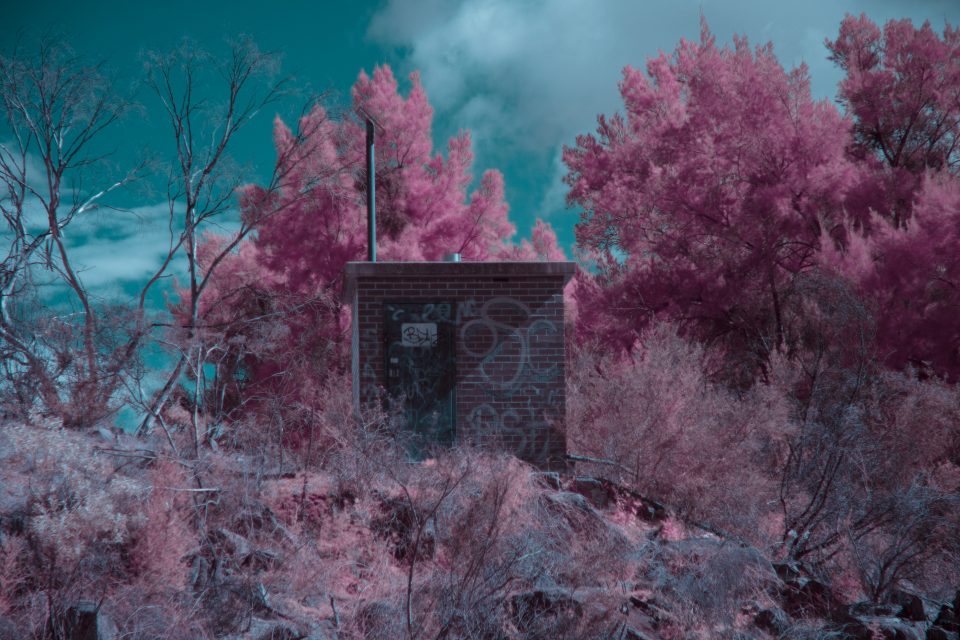 Tom has lived in Canberra his whole life and knows the spots that look good in normal photos.

His photography hobby is helping him pass the time during COVID-19 lockdown.

“Photography is honestly what keeps me going – astrophotography and infrared,” says Tom.

“At the moment, I’ll keep going out [if lockdown permits] and doing what I love.”

You can see more of Tom Gane’s out-of-this-world work on Instagram.

Where's all the bright spots on the balcony from the OAP's cups of tea?

This is how I imagine Mars to look like

Carmen Cassar - 5 minutes ago
When are hairdressers and nail technicians opening . It’s more likely to catch Covid from a supermarket. Mental health is g... View
Anthony Beck - 11 hours ago
Why can some training companies continue face to face training, and in a classroom environment, but transport training cannot... View
kenbehrens - 12 hours ago
Roy, I've always been concerned about the active type of exerciser. The runner, the cyclist etc and how that type of activity... View
News 57

Maria Kerr - 5 minutes ago
Candice Kelly amazing!!! View
Susanne Levy - 9 hours ago
Building this to be used by tumbleweeds . Maybe stop getting us into debt for things we may never use again considering our s... View
Joanne Foster - 14 hours ago
Lach Trev they sure would 😉 View
Opinion 28

Louise Monaghan - 13 minutes ago
Guy Noble thats not true plenty of people get married that are not "god loving", its about commitment in their eyes, yes it r... View
Mick Andrews - 8 hours ago
It does if your partner is very sick or dies. not all legislation has been updated to reflect de facto as equivalent as a leg... View
Jp Romano - 15 hours ago
Henry Kivimaki amen brother View
Community 3

Jay Franchi De Luri - 1 hour ago
Mark there is still time for a few cutlets…. Amy View
Julie Marshall - 3 hours ago
After the fight ppl did so McDonald’s couldn’t get it you have now dropped the fence ;(... View
Christine Cole - 6 hours ago
Yes it is Sharon Merten. Big and long fight. Proud of their resilience and determination. Also proud of making a big decision... View
Business 2

Peter Hislop - 9 hours ago
Unfortunately state and territory governments can only heed medical advice about risk/benefit of each change up or down. Feds... View
News 22

chewy14 - 12 hours ago
Yeah, almost none of what you just said is true. The Astra Zeneca vaccine is extremely safe and equally as effective as Pfize... View
skipper - 14 hours ago
Barr only cares about his own political profile, not his citizens. Three states have opened up eligibility to Pfizer for over... View
News 5

realopos - 13 hours ago
Here's a thought. We allow all double vaccinated people their freedom- Now! - only those vaccinated can roam freely? Benefits... View
Business 108

Capital Retro - 14 hours ago
Residents of East O'Malley and Red Hill will enjoy the aroma drifting their way under the inversion layer. View
show more show less
*Results are based on activity within last 7 days

UPDATED 5:00 pm:  Students from one of the University of Canberra's lodges have been contacted to inform them that a...
Food & Wine 0

Here's some news that might just bring you to tiers – baking legend Dobinsons is on a roll – making all your...

The promise of better light rail access to the Mitchell business hub is now a reality with services commencing on...
Opinion 29

@The_RiotACT @The_RiotACT
Did anybody seriously believe that the ACT lockdown would not be extended this week, asks Ian Bushnell https://t.co/hJkBRdXmGv (16 minutes ago)

@The_RiotACT @The_RiotACT
Dobinsons is on a roll and bringing their baked goodies to a street near you. Find you how you can get your fix to make lockdown a little sweeter https://t.co/z8IGWiEGyy (12 hours ago)