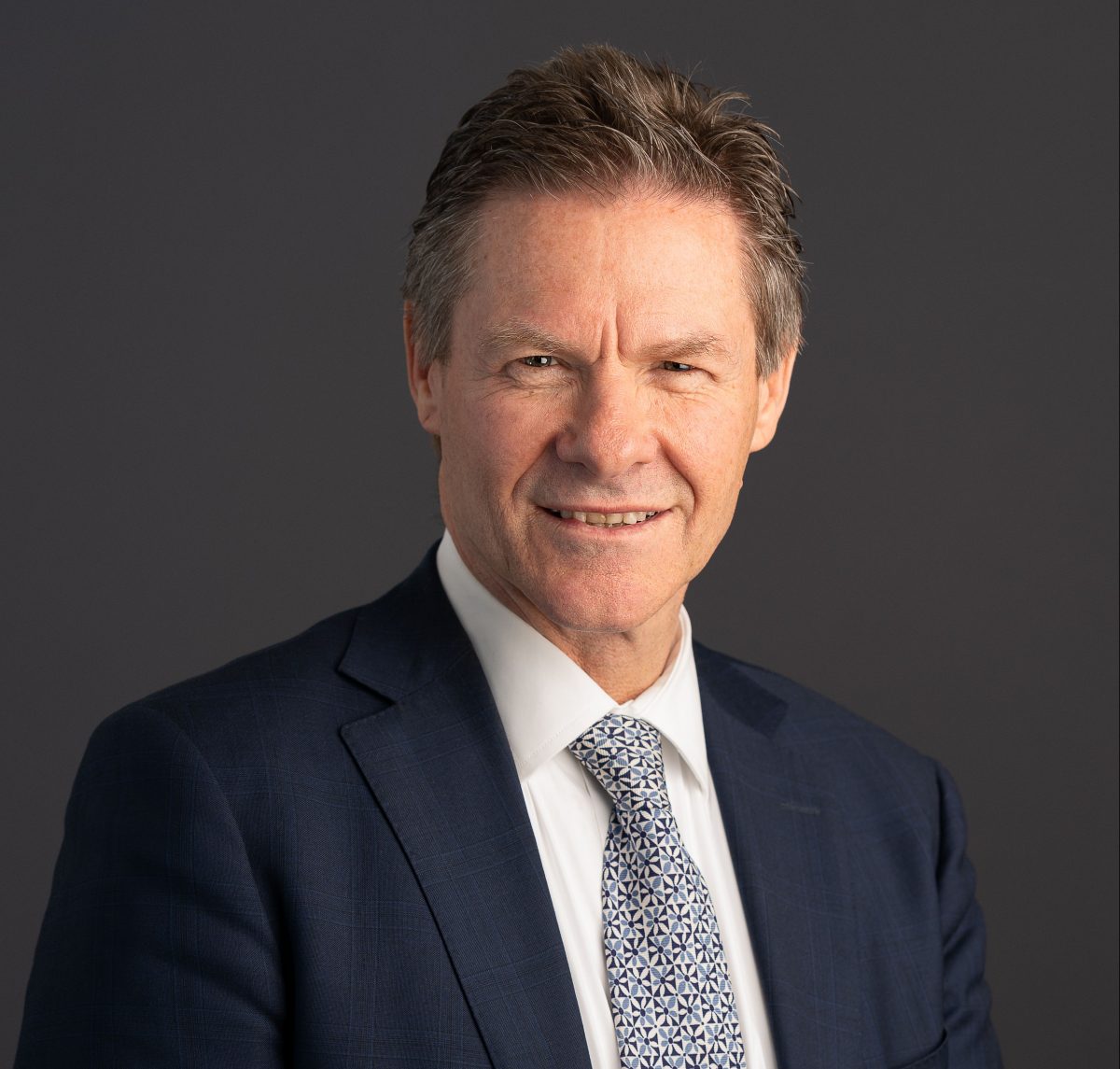 APS Commissioner Peter Woolcott will act on many of the review’s findings, but classifications will remain unchanged. Photo: APSC.

Sweeping changes to Australian Public Service employment classifications will not be happening anytime soon, despite an independent panel’s strong recommendation.

Australian Public Service Commissioner Peter Woolcott has released the much anticipated APS Hierarchy and Classification Review, saying he will act on many of its findings but will not change classifications at this stage.

Instead, a consultation period of undetermined length will start in November to further gauge the sentiment of staff and undertake a cost-benefit analysis of changing the classification rules.

The independent review panel, chaired by Professor Heather Smith, who has served as Secretary of the Department of Industry, Innovation and Science and the Department of Communications and the Arts, looked at how the APS could reduce hierarchy and make the best use of the capability and expertise of its workforce.

The first of the panel’s eight recommendations is to streamline the number of employment levels. Specifically, it recommended “modernising and simplifying the Public Service Classification Rules 2000 from 13 to 8 classifications, with Secretaries retaining the flexibility to structure their organisations to optimise business needs”.

The second recommendation is to refer to people’s roles with descriptive titles rather than numerical classifications. 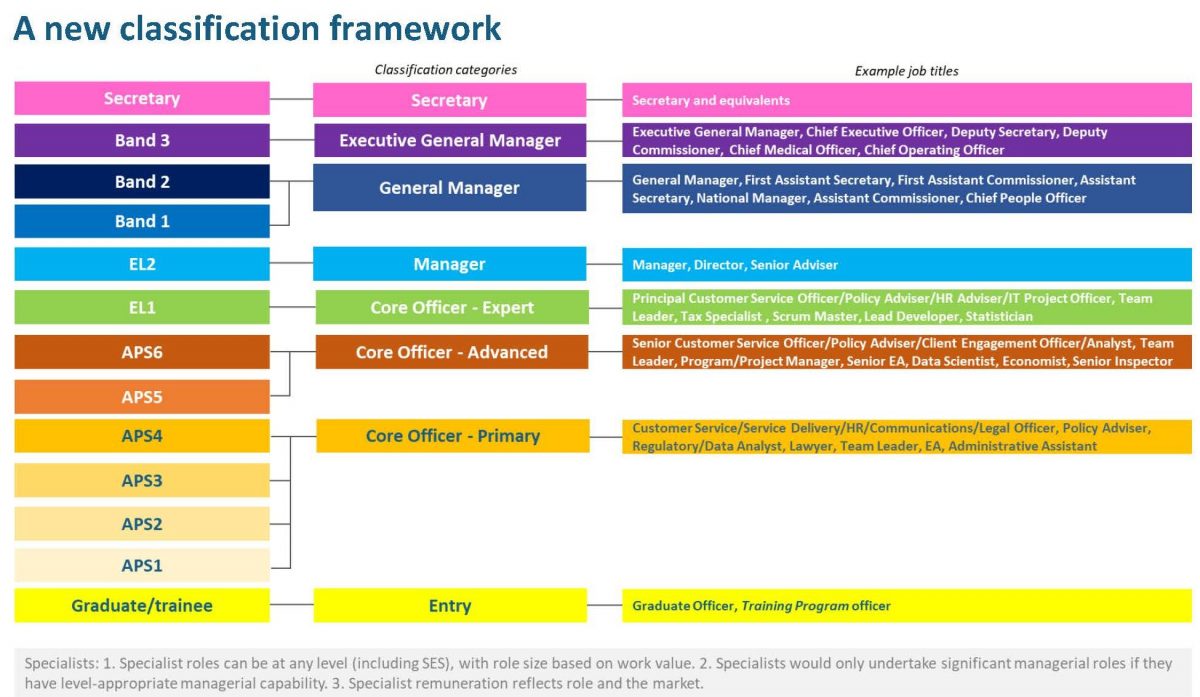 If these first two recommendations are eventually adopted, classifications now known as APS1 through to APS4 would be merged into one category labelled as Core Officer – Primary.

“The panel makes a good case for its ambitious proposals around classification reform, but the timing and viability of such complex reform needs to be carefully weighed,” Mr Woolcott said.

“Any decision to proceed with classification reform in the future would need to be looked at further in consultation with staff, stakeholders and as part of the Government’s reform agenda.”

The Commissioner said there were other recommendations from the review that would receive immediate attention.

The APSC would take “measured steps” towards more modern structures.

“A key theme of the review is strengthening APS culture and capability, and we will begin our work there,” Mr Woolcott said.

“I strongly support the aspiration to modernise the way we operate in the APS, to better position ourselves to meet future challenges and provide more rewarding careers for our people.”

Other recommendations of the review go to areas of enabling progression through the ranks through fair and transparent assessment; recognising the value of specialists within the classification framework; and urgent investment in the capability of future leaders, including mandated management training.

EL2s would get special attention in the areas of people management and leadership training.

But while the APSC will embrace these areas, changing the classifications appears to be on the back burner. 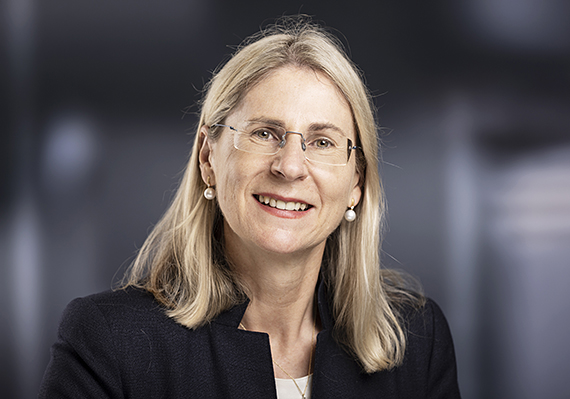 Dr Smith said she understood the need to get the culture right and to strengthen leadership inside the APS, but added that the classification structure was overdue for an overhaul.

“I think when you look at history and how organisations have had to implement change, we would like to see that recommendation moved on.

“The APS hasn’t changed its structure in 30 years. You have a workforce that is demanding more flexibility and in order to attract and keep good people in today’s environment, you need to offer that flexibility.

“But yes, you can aim for the best structure you like, but without a strong culture and good leadership, you won’t get the structure you want.

“Our view is you need to build in the maximum agility.”

The ten-month review was initiated by the APSC in 2021 after the Thodey Review highlighted the areas of concern in 2019.

The eight recommendations are:

Departmental secretaries have also released a new Charter of Leadership Behaviours. With the acronym DRIVE, the expected APS leadership traits are to be Dynamic and Respectful, have Integrity, Value others and Empower people.

“The expectations placed on APS managers continue to change and evolve as we respond to changing technology and more flexible ways of working,” Mr Woolcott said.

“So too we need to evolve our approach to growing and supporting managers as they adapt to new ways of working.”

If you get called an ‘expert’ in the APS it’s derogatory.

The first two recommendations (reduce the number of classifications and stop using numbers in classifications). Those proposals could make a small dent in the culture of obsessing about seniority in the APS and bring the focus a bit more to what skills people have (some of them very deployable in the private sector btw) and give us mere mortals a little more self respect as we flit between sectors.

But all that good structure-flattening work will be undone by the focus on the DRIVE attributes. Why do public sector reviews always emphasise ‘dynamic leadership’ at the expense of sober, competent (albeit dull) management?

The DRIVE attributes will be good for satire but otherwise the only thing they are good for is to reinforce the self-absorption of upper management and result in the culture staying as it is, i.e. a culture driven by introspective SES shindigs in the Southern Highlands, butcher’s paper and crayons, shallow personality tests, Secretaries’ boards, Mid-Winter Ball appearances, worship of one’s dynamic self, power dressing and the whole cultish catastrophe.

Back to everyone lauding the SES (the current problem as identified by the review) and no one knowing how to manage.

Looking forward to an episode of Utopia on this!

Aaaand until this happens you’ll continue to find specialised ICT staff going private, regardless of the PMs ‘pledge’ to cut contractors.

More concerning is they still have not recognised that so many of the EL2’s are paid that as they are subject matter experts who could earn much more than that if they worked in Industry and it is the only way to keep them.
Stop assuming all ELs are managers and should have staff reporting to them.

God help you if you have staff reporting to you

How very amusing !
Today’s APS folk have a rich history.
I am of a vintage to recall when there were four Divisions; and when nominally “Permanent Officer” women were always obliged to Resign as soon as they got married (and kindly were allowed to continue their employment by becoming “Temporary”, instead – sometimes for years and years); also, when other Gazette-watchers would talk in arcane terms of (was it 1940s-value ?) Pounds salary maximums.
For example – “594”. “816”, “1012”.
There were accelerated Graduate entry, after the “CST” – the commonwealth selection test.
There were about twice as many clerical/admin salary scales, compared to today, I think.
Protective Appeals were lodged when competing to retain your own promotion, when others could make claims in large part based upon one’s place in the avidly consulted the official “Seniority List”.
Best of all, being under 21, was to be promoted from a “base-grade” Clerk and getting paid at “adult” rates, not as a “junior”.
Those Were the Days !
And I must be getting old !!

Interestingly none of the leadership traits they want within DRIVE involve achieving outcomes.

Hey SigmaOctantis, do you mind if I agree with you on this occasion?

It is true that bumpf always creeps into idealistic statements, but I was particularly taken by this:
“Practise new ways of deploying yourself….”
The mind could boggle. A visual cartoonist should get hold of it.

It will be interesting to see if the APS can address the problem of attracting specialists, currently solved by calling them contractors and paying them in the SES ranges.

Whoever thinks this is funny, remember, staff at the hospital work at APS2 levels ensuring your preanalytical tests save your life. That’s pay that is less than a check out operator.

Archibald Cary Elliot but still more than a graduate nurse earns who had to obtain a University degree.

Archibald Cary Elliot this is a federal review, not state/territory

Alison Brittliff yes. There was a State one too last year in ACT.

The removal of the APS 1-3 classifications wouldn’t really have an impact anyway, those roles are very rare.

My God I’m sick of strategic and cultural reviews. For a bureacracy the APS is really poor at just doing competent administration. How about a micro functional review of narrow minded people who understand their specific job?