Michaela Leonard steps up to take on questions for this weeks Q&A. Photo: Karen Watson.

Last week Brumbies captain Allan Alaalatoa opened up about his life in the capital, life with the Brumbies and even his favourite coffee (small double-shot flat white).

Leonard was named co-captain of the women’s outfit ahead of the 2020 Super W season. The season was subsequently cut short due to the COVID-19 outbreak and the NSW Waratahs were crowned champions for the third straight year.

The 25-year-old Leonard has had quite the career thus far, having only started playing rugby union ahead of the team’s tryouts before the Super W inaugural season in 2018.

That year she was named Brumbies rookie of the year. Last year she became an international, playing in the Wallaroos squad that took on Japan.

A: Anything outdoors. We’re surrounded by some great national parks and bushland. I love to get out and ride horses, go bushwalking or take the dogs swimming down at the river.

A: Tidbinbilla and Questacon for kids.

A: The open spaces, bushland, awesome walking tracks right in our backyard, great coffee and cafes.

A: Skim flat white or an iced long black.

A: The honour of being named co-captain this season. But hands down the best memories just come from all the incredible people you meet along the way.

A: Gab Peterson or Rebecca Smyth.

7. Teammate who should be the next bachelorette?

A: Horse riding or hanging out with my dogs.

A: Reading minds – it could be fun!

A: The Brumbies doubleheader for the opening game of the inaugural Super W season.

Got any questions for our big prop? Make sure to leave them below. 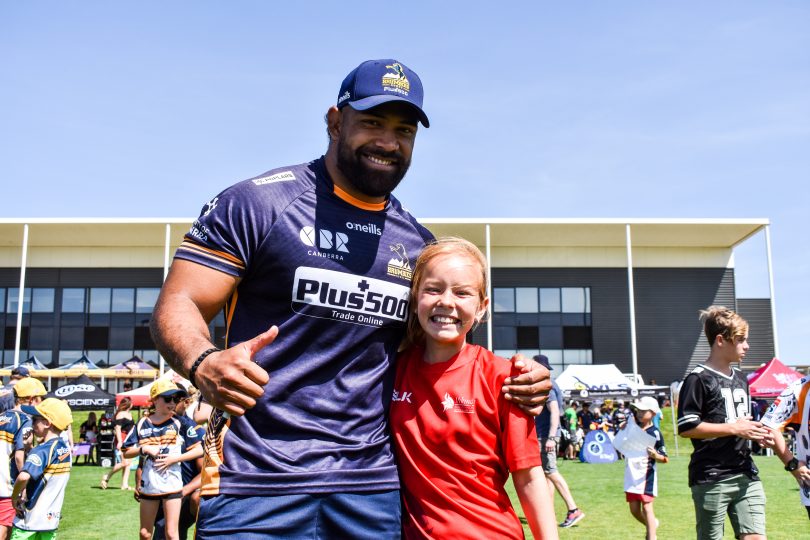 Scott Sio will take to the Q&A limelight next week. Photo: Lachy Lawson.

Bradley Heanes - 23 minutes ago
Didn't the defence department already appologise for this? (Even though they were assisting the RFS at the time) Didn't they... View
franky22 - 3 hours ago
Why can't the ADF simply state that they made a mistake. View
Peter Curtis - 1 day ago
A mistake is questionable - using a very hot light under those conditions suggests a lack of forethought or understanding of... View
News 21

Julie Macklin - 4 hours ago
Mark Katalinic Likewise why not use the roads for car racing? No, silly suggestion, as is yours. View
Julie Macklin - 6 hours ago
Tim McMahon Well, mine hasn't had a check since they closed the government registration check in Dickson years ago. Yes the c... View
Tim McMahon - 7 hours ago
Julie Macklin every year mine gets done thanks View
Opinion 172

Steph Maxwell - 6 hours ago
Phil Cowan Aboriginal people were not really included until after the 1967 referendum removed the section of the Constitution... View
Phil Cowan - 18 hours ago
The 26th Jan is a Public Holiday because on the 26 Jan 1949 because we ceased being British subjects and became Australian ci... View
ghutch - 1 day ago
A lot of good comments. Why don't we celebrate Oz Day on 1 Jan. Yeah I know you all still asleep from new year eve. But is th... View
Lifestyle 1

Jackie White - 1 day ago
Thank you. I never walk around the lake with headphones precisely because of the risk of collision with a cyclist View
show more show less
*Results are based on activity within last 7 days

Beth Stevenson is a single mother of two and she could be homeless soon if she is unable to secure...
News 37

@The_RiotACT @The_RiotACT
New figures show public housing has declined in the ACT, but there may be good news coming in the Budget https://t.co/P1qLgyPSFz (53 minutes ago)

@The_RiotACT @The_RiotACT
One year after the Orroral Valley fire started, Michael Weaver investigates how the park is recovering, and the threats it faces in the future https://t.co/wywSfIKRoQ (2 hours ago)

@The_RiotACT @The_RiotACT
A Goulburn father & son plan to fork out $65,000 to be cryogenically frozen when they die, in the hope of one day being brought back to life https://t.co/7doAIKVVFQ (4 hours ago)