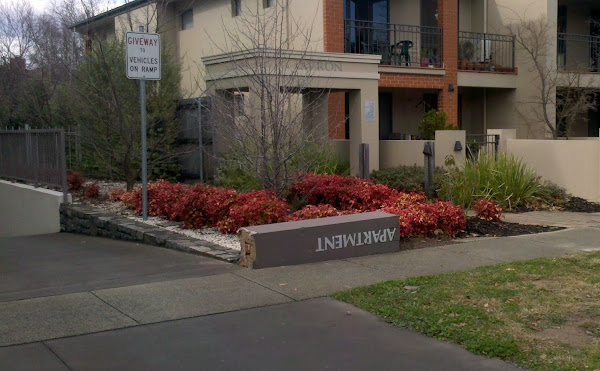 The Kelpie of Few Accomplishments and I were quite struck by this novel piece of signage in Turner this morning.

Readers are invited to speculate on how it came to be.

As a previous resident of that exact apartment block, I can certainly qualify for the terrible building standards.

The building itself is only about 6 or 7 years old, and in the apartment I rented, there were significant ongoing problems from a major roof leak (which not only was in our apartment, but also within the main stairwell as well), there were problems with rising damp (laminex flooring that had been installed in late 2010, by the time we moved out earlier this year was already very much ‘up and down’ like a 3rd or 4th day test pitch), lots of cracking occurring in concrete walls, and then plenty of other design faults (for example, a poorly designed courtyard which had drains placed at points which weren’t the lowest points – hence leading to lots of sitting water after heavy rain).

I understand the developer/owner of the whole property (he still owns all the apartments as far as I am aware) is (apart from being a reasonably famous Canberra sporting export) an absentee landlord, that is just looking to make the $$$, without doing the maintenance that is really needed. Hence, an apartment block that is already falling apart!

Therefore, it would not surprise me at all if that post just fell over all by itself, although it seems more likely someone run into it getting in or out of the basement parking.

I agree. Clear to see that the sign-makers committed no sin of inversion, but that the post has been damaged or otherwise caused to fall.

Good thing it didn’t drop the other way, as it would’ve been right over the drive. Though at least the letters would be right-way up.

Perhaps they should have called them the Cubic Zirconium Apartments?

How it was originally:

It says “I new I rapa” – it’s the hipster-inner-urban version of “Emoh Ruo”.

Yeah but to get the word “Apartment” upside down?

Got that – it’s obviously fallen over because it hasn’t been secured properly. If the builder didn’t go to the trouble of making a post that can’t fall over then what’s the actual building like? 🙂

It looks like it used to be on its end and someone has run into it.

The left hand end of it looks like it used to be upright perhaps and has fallen down?

Poor building standards and flats going up at a very fast rate. Most new flats don’t even have brick walls but instead have blue board with concrete rendering so they look solid.

And as for dividing walls – you could easily break through to your neighbours living room via one of these skinny “sound proof” boards. I’m amazed at how much they sell these places for – on what is a ridiculously over-priced market.

Yeah but to get the word “Apartment” upside down?