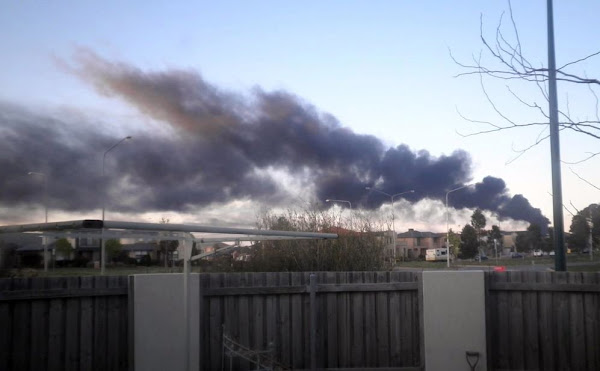 The Canberra Times is letting the other show drop on the “testing” by the ACT Environment Protection Authority which has so far found nothing at all from a huge open air burnoff of PCBs in the middle of Canberra.

The director of Queensland pollution testing facility Airlabs, chemical engineer Chris Clunies-Ross, said there were standard air quality tests for dioxins, but a six-hour air sample was needed for a conclusive result. These tests, used by Australian and United States laboratories were ”complex and expensive”, with costs ranging from $1200 to $6000 for each sample analysed.

”Dioxins are toxic at very low levels, and the kind of equipment used by fire brigades won’t be able to pick them up at the levels you need to test for. You need to use a technique called a PUF [polyurethane foam] test, that concentrates samples on to foam or resin,” Dr Clunies-Ross said.

Spokespeople for the ACT Government are quoted saying they didn’t know dioxins could be field tested for, and they didn’t feel the need for it anyway.

Some might wonder if it would have been nice to lead the field on this before allowing a huge dioxin processing facility to set up in between Gungahlin and the rest of the city. (To say nothing of in the neighbourhood of a youth detention facility).

The last time there was a major event involving these facilities, in 2003, over 400 houses were destroyed or damaged.

I’m sorry, you will need to be more specific.

Which 2003 event are you talking about? If it’s the bushfires, please explain the link to the Mitchell incident. It’s not clear.

Which facilities are you talking about? To the best of my knowledge, the 2003 fires didn’t centred on industrial recycling centres.

What else is ‘out there’?

Well, if you want something to be really concerned about, every suburb in Canberra contains a large facility which is next to residential housing. These facilities contain large amounts of highly flammable material which has been known to spontaneously ignite. The resulting fires can be quite catastrophic, causing much damage to nearby properties. If one facility does catch fire, it can easily spread to other facilities due to interconnections between them. Despite recent improvements, it is well known that the ACT Fire Brigade does not have the capacity to cope with a major event involving these facilities.

The last time there was a major event involving these facilities, in 2003, over 400 houses were destroyed or damaged.

When did Canberra become an industrial city with this kind of development? I grew up here, and came back with my children because I had always understood (similar to this delightful 1970s promo http://images.smh.com.au/file/2011/07/13/2489644/Canberralife.pdf ) . . .
that Canberra was not to have this kind of facility in it. I understood this was because of the necessity to continue to run the country if/when a crisis hit. Seems the ACT Govt’s and the Fed’s idea of what Canberra actually is, are at cross-purposes – you just can’t have the capital city of Australia being brought to a standstill over an industrial accident.

Now it appears that the equipment that gave the ‘all-clear’ on air quality was allegedly not up to the job. Unfortunately, I am unsurprised and very, very concerned. What else is ‘out there’?

‘A huge dioxin processing facility’. FFS, take a bit of time, care and responsibility when writing this stuff. You’ve got an obligation to at least be accurate when scaring people.

PCBs are not dioxins.The plant processed oils, including oils from transformers, that contain PCBs. Burning PCBs can lead to releases of dioxins and furans. But the plant is not a ‘huge dioxin processing facility’.

The fact that Dioxins could be tested for and how that was done should have come out as part of a risk management plan, from before the site even contained them.

At the very least the government should have consulted someone at least in the 24 hours the fire was in progress. That person should have been able to tell them about the possible effects of PCB’s failing that they should have tried someone else.

“Spokespeople for the ACT Government are quoted saying they didn’t know dioxins could be field tested for, and they didn’t feel the need for it anyway.”

If that’s the attitude in regards to a fire at a toxic waste processing facility, then no wonder my attempts to seek help from the consumer affairs people about a product that I believe to this day was hazardous and should have been made the subject of a mandatory recall fell on deaf ears.

Btw has it been explained anywhere what the plans and timeframe are for the stuff removed from the site as mentioned here in para 4 http://www.canberratimes.com.au/news/opinion/editorial/general/chemical-fire-wakeup-call-for-regulators/2302724.aspx?storypage=0

Surely the ANU has the capacity to test for dioxins?

helps if you’re even aware of a test that can find what you’re looking for.

(To say nothing of in the neighbourhood of a youth detention facility).

And people complain that the ACT government is soft on crime!

And just what is more detailed testing supposed to achieve? You can test all you like but it isn’t going to change the outcome.

Alex Dee - 24 minutes ago
It’s not, it’s only the noisy minority that are having a whinge about Canberra drivers.... View
Belinda Maiden - 33 minutes ago
I’m new to Canberra and have been surprised to find that: * P-platers seem to be allowed to drive at twice the posted speed... View
Alex Kearns - 41 minutes ago
More presence might send a deterrent message. The current on road presence is minimal so the deterrent effect is minimal. The... View
Breaking 7

John Moulis - 27 minutes ago
Thank you to those people who have responded to my initial post. Since airing my experiences here and on Facebook it is clear... View
I am a Rabbit™ - 9 hours ago
The problem with the approach of the federal government was they were trying to reach a middle ground between not pissing off... View
chewy14 - 11 hours ago
You're assuming what he's saying is correct though. Whilst they do have controls to prevent vaccine "shopping" for people not... View
Property 23

Marty Hoenig - 46 minutes ago
They have to drink beer in CF because they sure can't drink the water! View
Mick Gaffey - 10 hours ago
Just buy it already Jason Barton ✅ View
Amanda Sanderson - 14 hours ago
I’ll give you bottomless gin and tonics Peter Taylor 🤣 View
Property 14

Jason Hutty - 9 hours ago
Tim Van Der Vlist I'm not sure if you understand the economics of a member's club. The members own it. So yes, of course they... View
John Sands - 11 hours ago
John Ryan Steve Boege just means you should go to 19th hole and think about how you would have played... View
Fiona Wright - 12 hours ago
Irene Kelly greenkeepers made a mistake on the greens (in the article).. View
News 22

@The_RiotACT @The_RiotACT
Avoiding the main roads can be a false economy and a curse on neighbourhoods, says former rat runner Ian Bushnell https://t.co/Utlb3tlmeb (52 minutes ago)