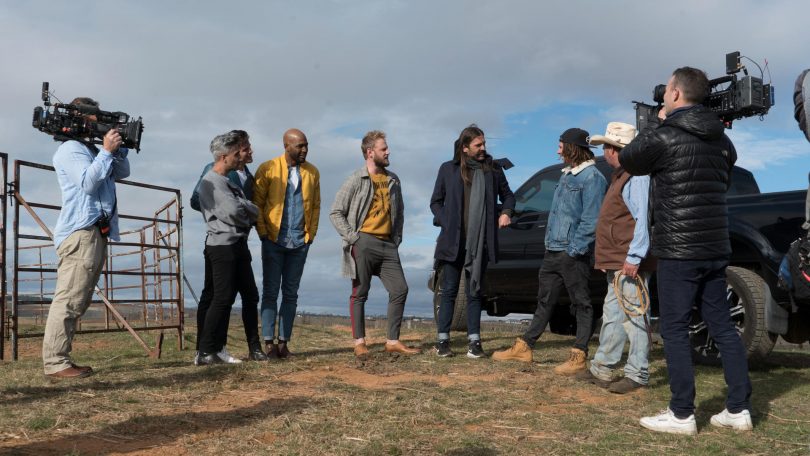 Queer Eye traveled to Yass in early June to make over George and one of the town’s eateries. Photo: Supplied.

The ‘Fab Five’ have swapped Kansas City, in Missouri USA for a country community at the bottom of the world just 56 minutes north-west of Canberra as excitement builds around season three of their hit Netflix series.

In the last week, ‘Queer Eye’ has been nominated for four Primetime Emmy Awards including best reality program, casting, picture editing, and cinematography.

The makeover show is a reboot of “Queer Eye for the Straight Guy” from more than a decade ago, but in 2018 comes with added depth and heart as the Mayor of Yass will testify.

Earlier this year, Daniel D’Addario from Variety magazine wrote, “Queer Eye seems to have decided that facing challenges and adjusting expectations shouldn’t solely be the province of its experts. As a result, it’s as fascinating as it’s ever been, a document of gay men in 2018 — proud but uncertain about pride, liberated but carrying wounds from an all-too-recent past — that feels unexpectedly vital.” 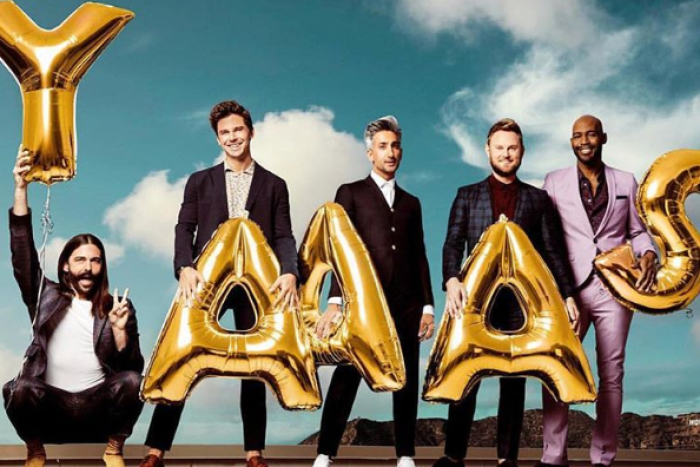 Yass, north-west of Canberra was a natural fit for the Fab Five. Photo: Queer Eye Instagram.

Drawn to the town’s name, a play on their own pronunciation of the word ‘yes’ and a catch-cry of the show, co-hosts Antoni Porowski, Bobby Berk, Karamo Brown, Jonathan Van Ness, and Tan France accepted an invitation for a mini-makeover on 50 something Yass cattle farmer George Hempenstall and the Club House Hotel bistro.

“My son Levi nominated me, it was strange, I thought it was Levi going on the show, and then all of a sudden it was me,” the father of three says.

“I’d never seen the show so I didn’t know what was happening, it was pretty funny and a bit of an eye-opener.”

The first time George meets the Fab Five on screen is genuinely the first time they all met, all of the arrangements were kept secret from the bull rider who has been single for some time.

“They showed me better fitting clothes and gave me a bit of dress sense,” George says,

“I had my hair cut and they gave me a manicure which I’d never had in my life.

“And Karamo got in my head a bit, cause my kids are always telling me I work too much and I should slow down.” 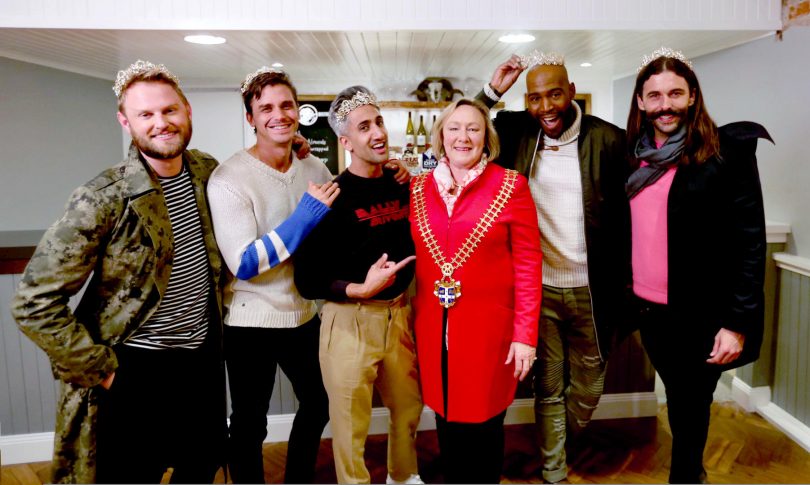 While the Fab Five’s visit in June was quick their influence has been lasting with George committing to more time with his family and less time at work as well as getting his missing tooth fixed ahead of his daughter’s wedding.

“Last weekend, when I would have normally worked, I took my son shooting for pigs out west, and then the week before that I went to Sydney with my daughter – it’s changed me more than I think,” he says.

Part of the Queer Eye mission was to make George’s look more appealing to ladies – in the hope of finding love again.

“Two days after we did the show, I was in Sydney for the Global Cup a big bull riding event,” George explains.

“And I met a lady there and we have been messaging each other every night since.”

George hopes the show will bring some attention to Yass, “it’s a great little community.”

“You walk down the street and you always get pulled up for a chat, it’s not much good when you are in a hurry,” he laughs.

“It’s a beautiful little place to live, we get four seasons a year, and we aren’t far from Canberra, the snow, or the beach.”

Yass Valley Tourism has started promoting a checklist of places visited by Antoni, Karamo, Tan, Bobby, and Jonathan during their Yass stopover.

“Walk in their footsteps,” the website says, pointing to main street cafes and boutiques and the ‘Queer Eye’ bistro at the Club House Hotel.

Yass Mayor, Rowena Abby who presented the Fab Five with tiaras upon their arrival in the town of 6,500 people says you can’t buy the sort of exposure Netflix will bring to the town.

“It’s been a great showcase for the whole Yass Valley,” Cr Abby says.

“And the response from locals has been very exciting, I know the pub has enjoyed the attention, there is a buzz in town, it’s a bit of fun.” 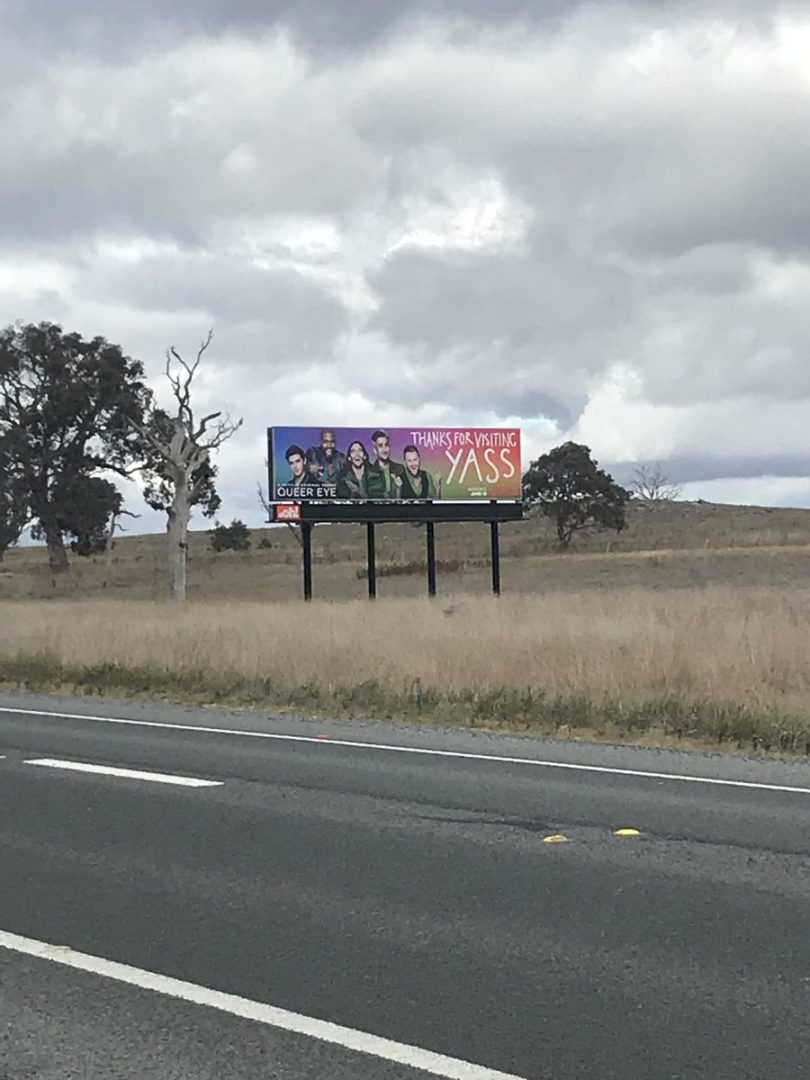 Aside from changing appearances, the presence of the Queer Eye troup in any of the communities they visit also challenges judgments, stereotypes, and ideas of manhood.

“Seeing George’s program is a great reminder to us all that sometimes you just need to reach out to people and the importance of keeping an eye on each other,” Cr Abby says.

“And George looked very uncomfortable with all his hugs to start with, but he’s a good hugger, and he got used to it, it took him outside of his comfort zone, but that’s not a bad thing for any of us.

Capital Retro - 3 hours ago
Now for the wind turbines. View
Dean Okeeffe - 4 hours ago
you'd think with all their planning did territorial birds not factor in. View
Henry Kivimaki - 5 hours ago
Can we train the birds to attack the work cover drones? .. 😏😉... View
News 83