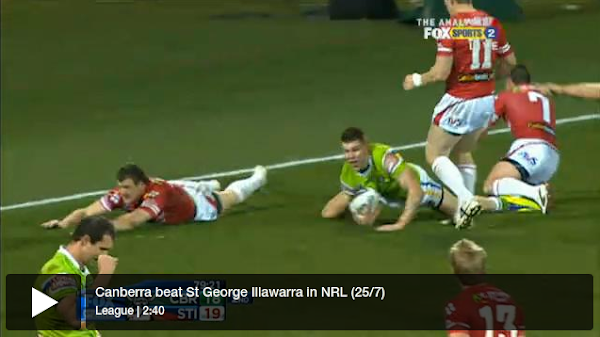 ‘Twas a ripper of a game. Josh Dugan was God-like in the second half.

Keiji-san, you are correct re Buttriss. However, McCrone had a bit of a night to forget, especially in the kicking department – too many brain-snap kicks on the third tackle for my liking.

Their first half performance was woeful, and in reality it was Sowards poor kicking that was the real difference in the game. Still it was great to see the Raiders get up in such a nail-biting finish.

Did anyone else notice the stark difference in speed between Buttriss and Tongue from dummy-half? It was like night and day. Also McCrone plays so much better when he thinks on his feet and plays what is in front of him rather than following some awful script.

Alex Colrain - 3 minutes ago
Di Gooding cheap as chips too!! View
Di Gooding - 37 minutes ago
Alex Colrain how cool would that be 🥰 View
Mark Cuthbert - 1 hour ago
Tracey Morton-Fisher your family would have already paid for half of it. 😁 View
Property 45

Izaäk Bink - 51 minutes ago
Robert Harrop hilarious coming from someone who had this as a legitimate profile picture View
Izaäk Bink - 54 minutes ago
Mike Davidson I can smell this photo... 🤢 View
Tom Allen - 1 hour ago
One for them and one law for the rest View
News 2

Robert - 1 hour ago
Those numbers reflect the numbers of indigenous people in our jails. Surely we need to do something about aboriginal people b... View
Food & Wine 5

Gregg Heldon - 2 hours ago
Julie Macklin that is called spatial awareness. That's a good thing. But you know that. And yes, heaps of accidents involving... View
Julie Macklin - 11 hours ago
Gregg Heldon People glance at many things when stationary at the lights. Their passenger, the person walking along the footpa... View
Lifestyle 2

wottaway - 10 hours ago
Went down Wheelbarrow Rd, past Pigeon House Mtn in '74 on way to Yadboro, beautiful spot and worth the trip. View
Property 37

Debbie Crane - 11 hours ago
Elroy Jones too old for that now. View
Community 13

Ric Hingee - 12 hours ago
Boycott the landlord. View
show more show less
*Results are based on activity within last 7 days

UPDATE - 1 June: Police have now arrested a man and a woman, and recovered a weapon, in relation to a...
Motoring 22

An intra-Australia travel bubble covering Canberra, Tasmania and South Australia could be up and running as early as July, according...
Property 45

Building a new home, or renovating or extending your existing home, is one of the biggest investments you’ll ever make,...
News 38

The ACT Government's plans for a small car park opposite Cooleman Court in Weston that will cost more than $600,000...
Motoring 22

@The_RiotACT @The_RiotACT
In another positive sign that life is slowly returning to a post-bushfire and COVID-19 normal, more parks and campsites are opening across the ACT. Find out if your favourite site is open this long weekend https://t.co/eLsYmW8lsQ (24 minutes ago)

@The_RiotACT @The_RiotACT
Business opportunities like this one don’t come up for sale too often; the Majors Creek pub is on the market! https://t.co/jpnNvkqqnB (3 hours ago)

@The_RiotACT @The_RiotACT
Roadblocks will stop access to Perisher, Thredbo, Charlotte Pass & other areas of Kosciuszko National Park this long weekend to keep the local community safe from the spread of COVID-19 https://t.co/EBLwb7M7DI (4 hours ago)