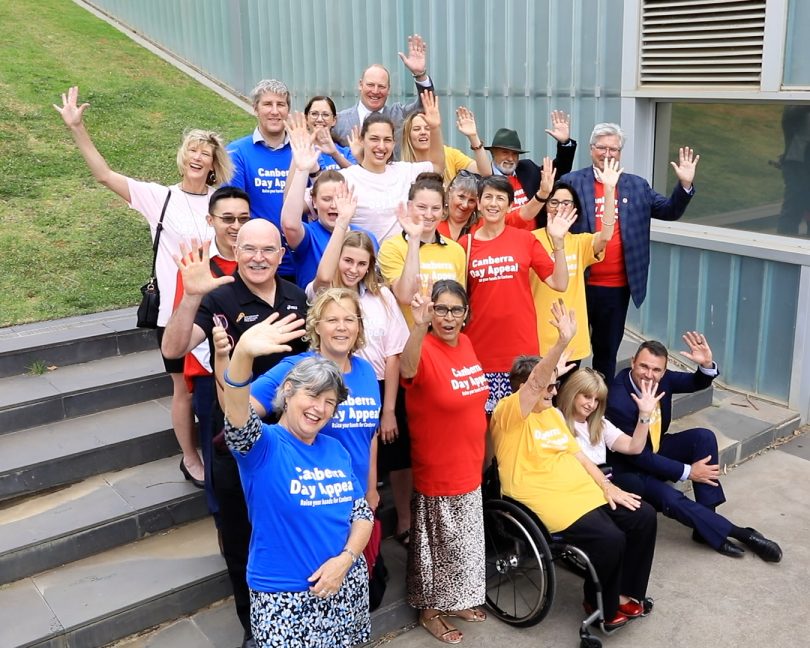 How do you show that you really want to get involved? You put your hand up, high and hard. Now we’re all being asked to raise our hands for Canberra, as Hands Across Canberra launches their inaugural Canberra Day appeal.

The plan is to turn our annual holiday into a focus for giving to those who need our help the most. Hands Across Canberra works with more than 250 ACT charities and believes this joint effort will exponentially boost our opportunity to help our community’s most vulnerable people.

It’s a huge idea with huge potential: ask every Canberran to give as little as $10 so we can raise $1 million together. And by setting Canberra Day 2020 as the target date, we celebrate with a big, meaningful gift to ourselves. Region Media is proud to be a community partner in this major endeavour.

The appeal launch gathered together everyone from Rob de Castella, Joe Roff and the Canberra Capitals to ACT senior Australian of the Year Sue Salthouse. Together with ambassadors from across the community including the Brumbies and the Cavalry, they’re part of an ambitious campaign to make a real difference at a community level.

Business is on board too, from employers like Deloittes, who will be encouraging their 400 staff to donate, to the Canberra Data Centre, whose CEO Greg Boorer has made a personal and corporate pledge to match donations from his employees.

“Canberra has a conscience and it has a heart”, says Sue Salthouse, a self-described lifelong advocate and campaigner for the vulnerable. “We should celebrate that about our community. This is a good place, full of good people who really care.”

For Joe Roff, it’s all about teamwork: he hearkens back to his days with the Brumbies when the strong sense of identification with this community and their support carried the team through their golden era.

“I’ve felt what it’s like to have the Canberra community behind you personally”, he says. “I want the people in our community who most need that help and support to get what they need.”

Ngunnawal elder Aunty Violet Sheridan wants to boost mental health support in the Aboriginal and Torres Strait Islander community. “Our suicide rates are among the highest in the world,” she says. “We have to do everything we can to save people’s lives and help them.”

One of the campaign’s youngest supporters is Paris McMahon, who at just 17 has been actively engaged in charity work since she was in primary school. In 2014, she established her own charity, A Little Hand, to fundraise for Hands Across Canberra as well as volunteering for education and human rights causes.

She wants to guarantee our future as a compassionate city where we help each other instead of relying on handouts.

“The objective of the Canberra Day Appeal is to encourage as many people as possible to donate as little as $10 each to help our most vulnerable citizens, both now and into the future,” says Peter Gordon, Hands Across Canberra’s CEO.

While the ACT is a relatively well-off community, one-in-200 people are homeless and one-in-25 people has a severe or profound disability and requires assistance to live a full life. One-in-four young people faces mental health problems and one-in-six young people has caring responsibilities.

Diane Kargas Bray AM, chair of HAC, says they work with over 250 charities and organisations in the region who need funds so they can continue to protect our most vulnerable.

“Our role at Hands Across Canberra is to give local charities and organisations access funds and resources so they can continue the great work they do supporting those most in need,” she said.

“Sadly, not every charity or cause enjoy the same level of awareness or fundraising ability as others. There are some that work with people who face tough or unfashionable causes, and for them, it can be difficult to access resources for the important work that they do.

“By supporting the Canberra Day Appeal, you will not only be supporting over 250 charities that we work with today but also the many worthy causes that may arise in the future.”

“We would gratefully welcome these contributions as it only brings us closer to our goal”, says Peter Gordon.

You can find out more about the Canberra Day appeal here, and about the work that Hands Across Canberra does here.

Yesterday we launched our first appeal for those in need in Canberra. I hope everyone who knows the work of the charities helping them I hope you all get on board and raise your hand and donate $10 to our cause for Canberra Day.