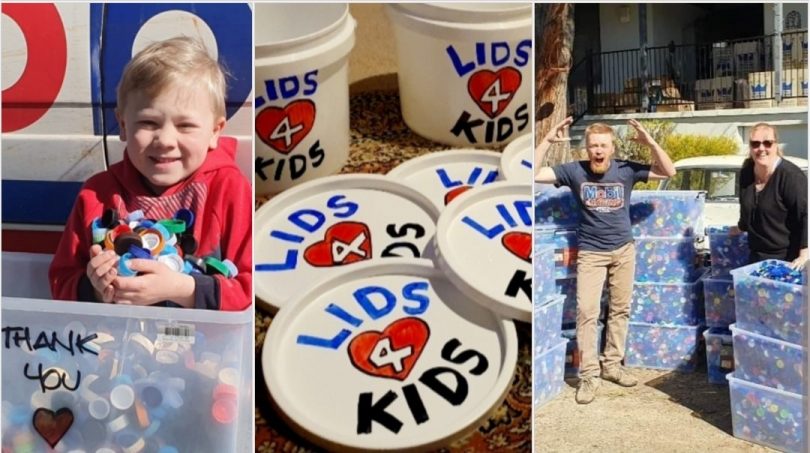 Tim Miller wanted a way to stop plastic lids going into landfill and now he has millions in his garage. Photos: Holden Rally Team – Lids4Kids Facebook.

Canberrans have rescued millions of plastic lids from landfill after an initiative from one man to donate the caps to create prosthetics for child amputees gathered thousands of followers.

Like any good idea that started in a garage, the success of Lids4Kids has been off the back of dedication and commitment, snowballing into its own movement across the country.

Founder Tim Miller was raising money for charity through his Holden Rally Team when he first came across the problem of recyclable bottle tops being thrown into landfill.

“I have an outback rally team and an old rally car, and we participate in rallies such as the Variety Bash and the Endeavor Rally where you fundraise about $10,000 and all of that goes to the charity,” Mr Miller said.

“The way that we were fundraising was by collecting 10 cent bottles and cans for the returns. We ended up with about three wheelie bins full of the lids that you need to take off before recycling them.

“When I contacted the recycling company asking to drop them off they said they do not take lids, they cannot be recycled.”

Mr Miller was told that despite the bottle tops being recyclable, their size meant they would fly off conveyor belts and bounce off the gears of shredding machines, so companies decided it was not worth their time or money to constantly clean them all up. 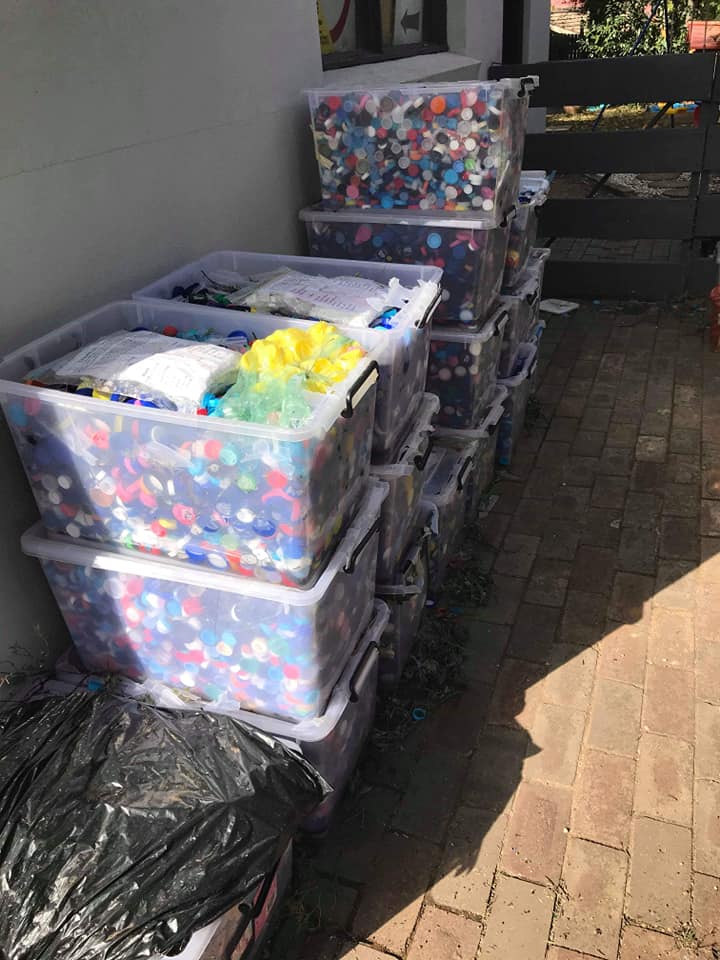 Storage containers full of bottle caps. Lids4Kids is calling for ideas on how to recycle them to help children.

“I had a look on the internet to see if I could find any recycling companies that would take them and the only thing I could find was a group down in Melbourne,” he said.

“They were experimenting with turning the lids into filament for 3D printers and were attempting to make mobility devices or hands for kids who did not have a hand.

“Back in June, they told me that they wanted to collect a quarter of a million by the end of the year. Naively, I just stuck it up on Facebook on our outback charity rally team and within 48 hours it went absolutely nuts.”

Mr Miller was inundated with donations and messages from the community and managed to collect all 250,000 caps in three weeks.

Within five months, they had five million lids.

The Melbourne company uses around 500 caps to make a prosthetic hand but as they are still in the prototype phase, with the limbs being used as a backup to titanium or stronger prosthetics, the production capability was unable to process the large number of caps.

“That is when we formed Lids4Kids officially in July last year,” Mr Miller said.

“We ended up with over 10,000 volunteers joining our Facebook group nationwide in that first month. These people were so passionate about rescuing these lids from landfill that they did not mind what they got turned into as long as it was something that helps kids.

“We are receiving over 50,000 lids a week. We have a lot of volunteers that are helping wash the lids, count them and sort them into colours. Our mission is to rescue as many lids as we can from landfill and turn them into something that can benefit kids.

“We probably have nearly a million lids and cans in Brisbane, hundreds of thousands in South Australia and Western Australia, all on their way to Canberra.

“It has become a real environmental project.”

Mr Miller says that there are over 225 collection points where people can drop lids off around Canberra, from schools to libraries to MPs offices, with countless volunteers helping to clean and sort the lids, all run out of his garage.

But he needs help. Conservatively, Mr Miller expects to receive between 30 to 50 million lids in 2020.

A local volunteer offered the use of her garage to house and sort bottle caps but Lids4Kids “desperately” needs to find a workshop.

“We have a swap-and-go at our house where volunteers will come and pick up a box of dirty lids and go and wash them and bring it back,” he said.

“We desperately need help in Canberra to find somewhere as a workshop because we are storing lids in private garages and have lids coming in from all over Australia. We are getting over 100,000 at a time.”

The project is aiming to use the recycled plastic to help children and Mr Miller is reaching out to the community for ideas on what to do with it.

“In an exciting development, the Australian National University is coming on board with their own plastic recycling equipment,” he said.

“They have an optimistic goal to take all the lids that we collect, and use their engineering students to come up with ideas and designs for prototypes, which can then go into production.

“All the money we are raising is for a granulator, which shreds all the plastic down to about to the size of a grain of rice which can then be melted and put into moulds.

“Whether we end up making school supplies, or playground equipment or park benches for kids to sit on, we are really, really interested in any volunteer groups who are interested in turning this plastic into something else.”

If you have any ideas or want to get in touch, visit the Lids4Kids Facebook page.

Fantastic initiative but I can't find where out where the drop off points are. I am in Gungahlin.

Great initiative. Amazed how many lids even our small household collects every week.

Check out this story Sarah Walker. So good!

Talk about making a difference in this world :) Congrats!

Can't they be made into, lids?

Rosie Jennings The Markets in Wanniassa were taking them before Christmas.

Samuel Gordon-Stewart - 31 minutes ago
John Hawkins I’m all for optional seatbelts (and optional helmets, for that matter). A spike in the steering wheel, while i... View
Stuart Brogan - 6 hours ago
James Hutchison of only there was a cycle network. View
Stuart Brogan - 6 hours ago
Carole Ford you are close, except cycling is actually not that dangerous, it is sold that way. The life expectancy of a cycli... View
News 19