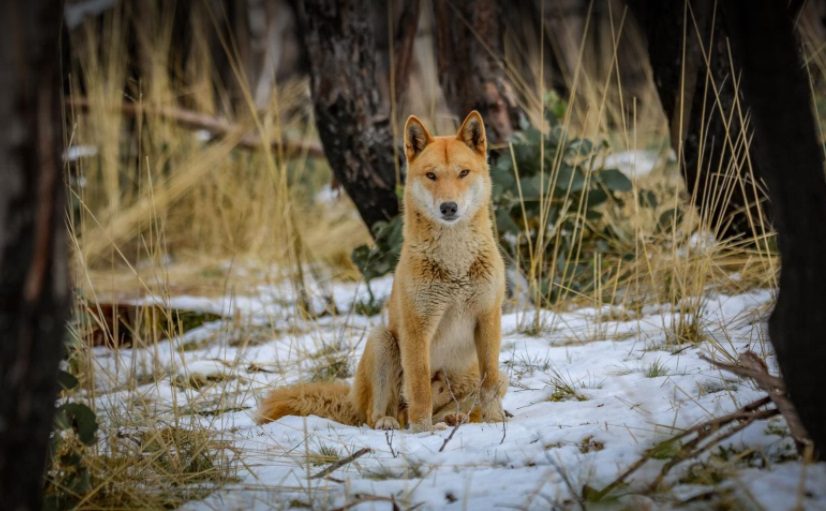 Ian and Michelle Brown’s recent encounter with a dingo in Kosciuszko National Park allowed them to observe it for around 45 minutes. Photo: Snowy Brumby Photography Adventures with Michelle and Ian.

Alpine wilderness wanderers Ian and Michael Brown are seeking to have the stigma associated with dingoes tempered by their own experiences of sightings in Kosciuszko National Park, one just weeks ago.

The pair trek into the mountains weekly to document, through images, their encounters with wild horses, but occasionally they’ll come across something entirely different.

It was a flash of orange in early July that alerted them to the watchful gaze of a dingo in a thick scrubby part of the national park.

“He was chewing on a brumby that had recently died,” says Ian. “While that may sound a bit morbid, this is the way of the wild in the mountains.

“We don’t see the alpine dingoes all that often when we are hiking up the mountain – sometimes we don’t sight one for months – so it’s just being in the right place at the right time, and obviously the more you visit the mountains the more chance you will have of sighting one.”

This dingo afforded the couple the opportunity to observe it for about 45 minutes. 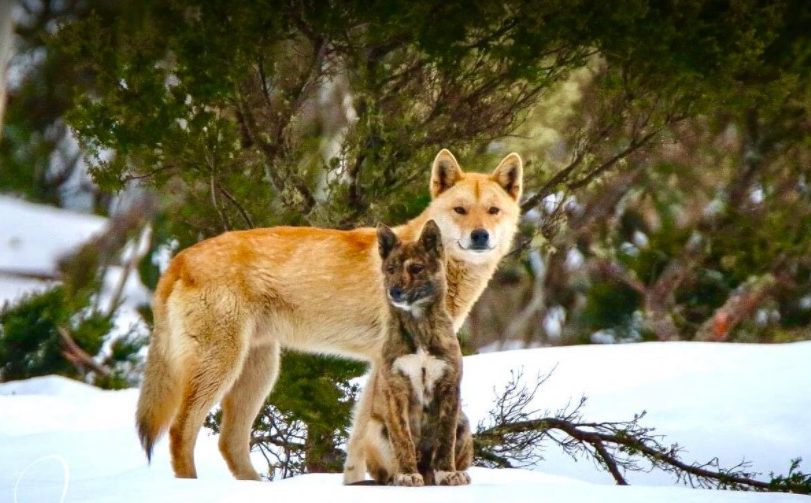 Getting up close to a dingo in the wild at Kosciuszko National Park. Photo: Snowy Brumby Photography Adventures with Michelle and Ian.

“We were beside ourselves, the fact this beautiful alpine dingo let us get close to him and allowed us to stay with him for such a long time,” says Ian. “Maybe he knows us from a previous encounter.”

This brush with Australia’s only native canine – a shy and apprehensive species – is rare. According to Association for Conservation of Australian Dingoes board member and Dingo Conservation Solutions NENSW president Zac Forster, it was likely permitted by the dingo due to an earlier exchange.

“You’ve got to get pretty lucky to see them,” he says. “Dingoes are easily frightened. They will take flight, but I looked back to another photo Ian and Michelle had taken a few months ago and it was the same one [dingo].

“The reason they got so close to this one is because the dingo knew them and knew from its first experience they were not a threat so allowed them to get a lot closer.”

Ian says of the dingoes they encounter in the national park, many have tan and white colouring with white socks, but some are brindle, black and tan, and others are sable – ginger with a black stripe along the spine – in colour.

The university’s Centre for Ecosystem Science collated the results from more than 5000 DNA samples of wild canines across Australia, making it the largest and most comprehensive dingo data set to date.

UNSW conservation biologist and co-author of the study, Dr Kylie Cairns, says the researchers found pure dingoes that had a brindle, black and tan, patchy or sable coat colour.

“That’s showing dingoes are much more variable than we think, and seeing an animal with an odd coat colour doesn’t immediately mean it’s a hybrid,” she says. The research team also found almost all wild canines in Australia are genetically more than half dingo, with 99 per cent of those tested either pure dingo or dingo-dominant hybrids – a hybrid canine with more than 50 per cent dingo genes.

Of the remaining one per cent, roughly half were dog-dominant hybrids and the other half feral dogs.

The findings, says Dr Cairns, who is also a scientific advisor to the Australian Dingo Foundation, challenge the view that pure dingoes are virtually extinct in the wild, and calls to question the widespread use of the term ‘wild dog’.

She says there simply isn’t a wild dog problem in Australia, and that lethal measures to control populations are primarily targeting dingoes.

“Wild dogs just aren’t established in the wild,” says Dr Cairns. “There are rare times when a dog might go bush, but it isn’t contributing significantly to the dingo population.”

The researchers are planning to use updated genetic techniques to look at dingo ancestry across Australia to uncover the origin of some of the coat colours.

“We want to examine whether these coat colours are ancestral or came from dogs originally but have been present in the population for 100 to 200 years,” says Dr Cairns.

In the meantime, Ian says the fact this dingo was surrounded by warnings of 1080 baits is concerning.

Following the bushfire season of 2019-2020, the NSW National Parks and Wildlife Service significantly increased the level of aerial baiting conducted on land it manages, primarily to reduce post-fire predation by foxes on native wildlife, but also to reduce predation by foxes and wild dogs on neighbouring livestock enterprises.

But Ian says this is self-defeating, given ecological research in Australia and worldwide during the past two decades has increasingly demonstrated the importance of conserving medium-to-large size predators for ecosystem health and the preservation of biodiversity.

Next week: How wolves and dingoes are saving landscapes. Have you heard of Yellowstone?

Njce to think there are still pure dingo’s about

I had at least 3 encounters with dingos in the last 2 years from 8 trips to the top of the montains.

Jimmy Wilson so that would have been a dingo you saw a couple of weeks ago!!

Have seen them a couple of times 🥰

Yep. We saw one too, just off the side of the road. We pulled over and it sat down about 20m away just looking at us. Big bushy tail and a fluffy winter coat.

Beautiful animals essential to keeping the eco system in check

We saw one on our way up to mt perisher at about 6am inside Kosciuszko NP a few weeks ago. It crossed the road ahead of us. We thought it might have been a wild dog. It looked like a dingo but we didn’t think there were any in this area. So beautiful.