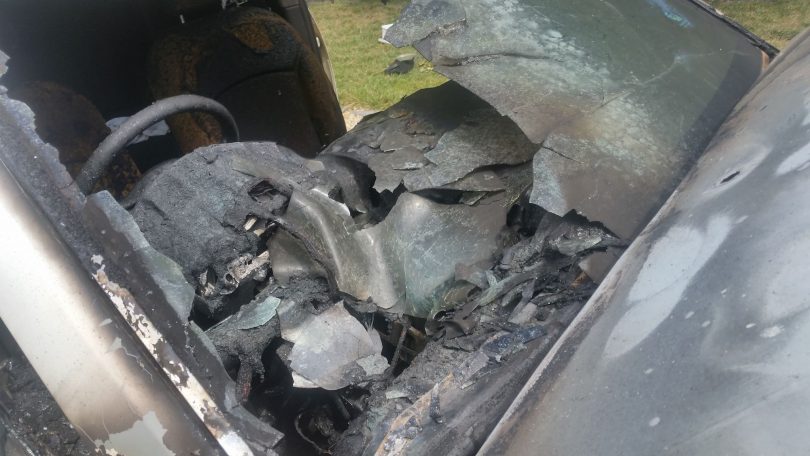 Will Gooch’s car was left beyond repair. Photos: Supplied.

Police are investigating a spate of car fires in the quiet suburban streets of Kaleen in the early hours of Friday morning (15 February) as Canberra’s summer of car fires rolls on.

Will Gooch, who was staying at his girlfriend’s place for the past week while planning to move to a new house this weekend, had parked his car on the nature strip at the front of the house on Gairdner Circuit. His girlfriend was just about to get to bed when she heard the sizzle of something burning coming from the front yard.

“She looked out her window which is adjacent to where my car was parked and saw my car was on fire. They had started a fire on the driver’s side under the bonnet. It looks like they have shoved something under the bonnet and lit it,” Will said.

“I came out running and screaming and I tried to put the fire out with a towel, anything to try and smother it. By that time it was under the engine and there was nothing I could do. I went into panic mode and rushed to grab everything out of my car. 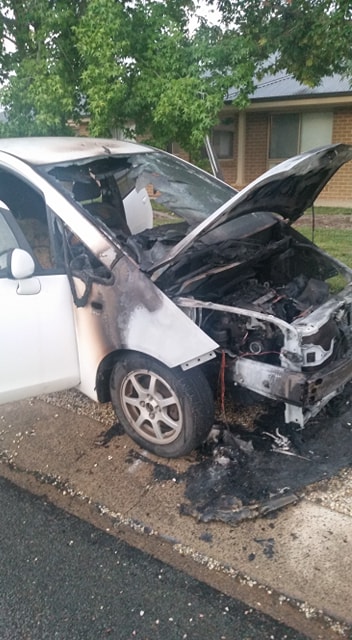 “The windscreen hadn’t caved in, and it probably was not the smartest thing to do but I tried to grab everything I own out of the car while it was alight. It was full of clothes, golf clubs and everything ready for me to move today. If I had lost them, it would have set me back to step one.”

A mere ten minutes prior to this incident, firefighters were called to a car fire in Terewah Circuit in Kaleen, two streets away from where Will Gooch’s car was parked. Will’s car was parked within 15 metres of the house under two trees, and was lucky his girlfriend noticed the fire before it reached the house and surrounding trees.

Will said he was left absolutely gutted and his moving plans are now in disarray.

“It is beyond a joke. I just don’t understand people. What line of reasoning would lead you to light cars on fire in the middle of a street?” he said. “I am gutted and I have lost any shred of faith in humanity.

“I don’t know who did this but I was ready to go on a rampage to just try and find them.

“It isn’t just about the money. I have had to take the day off work, I have to chase up other cars to help me move, I have to go through insurance. It is an incredible hassle.”

This most recent incident follows a spate of car fire incidents in the capital – 56 in December, and more recently, cars set alight last month in an O’Connor car park.

An ACT Policing spokesperson said police were aware of car fires in Kaleen this morning and were investigating. 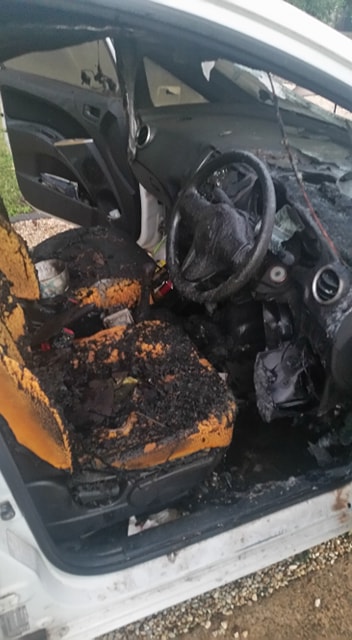 “if no answers I’m going to the ombudsman”

Believe it or not but the ACT Omsbudman has a booth at today’s Multi-Cultural Festival.

Only for the reason I had to go to another gathering I would still be there chewing their ears.

Caitlin George "north side is so much safer than south"

It's so dangerous though and dangerous isnt what you want

The inconvenience and the damage for no reason is awful

Why???? Does anyone have a theory because I don't get it.

The authorities seem to think it's a gang or something.

A gang with about 5 brain cells between them.

David W Jones - 1 minute ago
Just look at the number of contractors that just keep getting extensions or renewals with no questions asked! View
Garry Dodds - 30 minutes ago
First Dole Office, so many public servants lining up for Coffees at 9am every day.Do Are they dedicated to work? View
Jimmy J LaRue - 8 hours ago
There used to be a technical stream in the Commonwealth. Like there are pay grades for Legal and some other specialty streams... View
News 159

Frank Arnold - 28 minutes ago
Ohhh myyy Goddd !...Crooked pavements!...pot holes in our roads!...and now it's long grass !!!! FFS we hardly had any 3/4 yea... View
Cary Elliot Johnson - 4 hours ago
I'm confused as to why the grass cutters are now only doing a half R'sd job and leaving kurbsides and big chunks around obsta... View
Rien Wiersma - 8 hours ago
Troy Dare yes, you’re right, I was just being naughty,... View
Breaking 1

liberalsocialist - 46 minutes ago
What a disgrace. And while in no way taking away from this cowardly act, I have come from NSW where we are told to dismount a... View
News 13

kenbehrens - 47 minutes ago
That makes no sense. Your comparisons are 20-25 years apart. The "new" bus route takes longer because it services a bigger ar... View
bj_ACT - 2 hours ago
Not sure about the adding 10 minutes to the 333 journey by changing to go past College St and UC. The change Only added 1.2km... View
michael quirk - 6 hours ago
Yes,but it is by no means certain that light rail stimulates urban redevelopment more than BRT. Much depends on design of the... View
News 3

kenbehrens - 2 hours ago
Mr Parton is right. If Dr Paterson is concerned about why women, (but let's just say people) don't leave the car at home and... View
bj_ACT - 7 hours ago
Removing over 700 bus stops across the city and making women have to walk much further to their bus stop is one obvious issue... View
News 1

Brigid Whitbread - 9 hours ago
Peggy Sue I would love to talk to you about your certificate. If you had a moment to call me at Queanbeyan Library I would be... View
News 1

Stunning family home in Kaleen goes on the market