Reckon you know how to solve our planet’s water problems from space?

The Canberra Innovation Network and the Centre for Entrepreneurial Agri-Technology (CEAT) are putting out a call to budding entrepreneurs, scientists and anyone with a big idea about solving water scarcity issues, to enter this year’s H2O Hack.

The hackathon, which will take place from Monday 11 October to Friday 15 October, is a team challenge focused on coming up with solutions to one of the planet’s most pressing issues.

This year’s program has been moved online but remains open for anyone with big scientific ideas they’re ready to combine with some business-like savvy.

A hackathon is a bit of a sprint-like event to put together some technology designed to solve a specific problem that won’t necessarily be perfect at the end.

However, it’s also got an element of a marathon to it, because you really have to keep pushing through the five days.

This hackathon also includes workshops and keynotes from industry and academic experts with specific time put aside for mentoring and, at the end, there’s a prize pool of $20,000 and access to leading CBRIN mentors.

Last year’s challenge was to come up with technology to drought-proof the agrifood sector and their idea was to use Aquaporin embedded membranes to filter water. 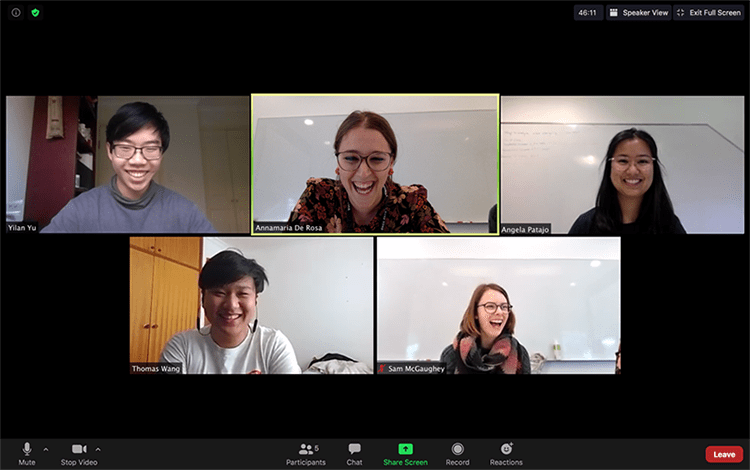 For both Samantha and Annamaria, the hackathon was a way of gaining exposure to the business and start-up side of entrepreneurship.

“As scientists, we’ve never been engaged with anything business or entrepreneur-related so while it was really challenging, it was also very rewarding,” Samantha explained.

Along with previous H2O Hack mentor Dr Caitlin Byrt, they’ve gone on to create Membrane Transporter Engineers Pty Ltd, a company working on advancing the function of membrane separation technologies to enable the harvest of valuable resources from liquid wastes.

For Caitlin, it’s been a domino effect since Samantha and Annamaria led the hackathon team to victory last year.

“The hackathon last year was an awesome process in the context of networking and forcing us to think a bit harder about how we were really going to make it happen.

“Since then, rather than it being an idea, it’s now a company,” Caitlin explained.

Moving forward after the hackathon, Annamaria says they’ve participated in many of CBRIN’s programs such as the Griffin Accelerator, Research to Impact – which helps scientists develop ideas into products that can be commercialised.

Annamaria’s best piece of advice for preparing for the pitch is to come up with some punchy and clear analogies – especially if the science is quite abstract.

Their starting line last year was ‘wouldn’t it be great if our waterways had kidneys?’ which clearly conveys the notion of needing to filter agricultural wastewater before it enters waterways and pollutes them.

“Try and work out a way of communicating the ideas that’s clear.”

Right now, the team are engaged in every entrepreneur’s favourite process –grant applications – and CBRIN has also helped connect them with potential investors.

“It’s been all about the exposure,” Caitlin added.

READ ALSO: How signing on to a job site means signing up to safety

When asked if they have any last-minute advice for people who aren’t yet sure if they should enter – Caitlin had some words of wisdom.

“The hackathon is a great way to get your idea off the ground – that thing you’ve been wondering about – road test it on a whole group of people who can give you advice and support and help you through,” she said.

“It’s not often in life when you have a crazy idea and an opportunity to put it out there in a friendly and safe space.”

Applications for the hackathon close on Friday, 8 October and it’s free to enter.

See the Canberra Innovation Network H2O Hack for more information, including how to apply.

Futureproof - 5 hours ago
chewy14 - I'm a boomer, still working. When I retire, I'm going to hit up the government to get as much free stuff as I can.... View
Capital Retro - 7 hours ago
I referred specifically to that demographic who were self-funded. I suppose it doesn't matter anyhow because you hate them al... View
Mataina Rozowsky - 21 hours ago
Of course they're rising .... Canberra's are on the move again View
Community 1

Lucy Green - 11 hours ago
I have lived in the area for a long time. These birds are definitely breeding and spreading. What started as the Narrabundah... View
David Worboys - 19 hours ago
As new comers to the suburb it was great to see these birds at first. But after seeing the number of near misses with car acc... View
George Jenson - 22 hours ago
With all due respect I agree. They are feral animals. I have seen the skinks in our front yard disappear. What about the enda... View
News 5

gooterz - 19 hours ago
The anti VAx community would have a field day with the at your own risk nonsense.. The park should be fit for purpose. It eit... View
Dallas Stow - 1 day ago
I'm guessing that injuries have occurred to only a very small minority of users. Why close them off to all if some vetty few... View
ChrisinTurner - 1 day ago
Children need to be taught tat living in Canberra is dangerous, in particular the 50 km/hr speed allowed in residential stree... View
News 51

@the_riotact @The_RiotACT
A move to the #country is a dream for many #Aussies, and for one multigenerational family who established a microflower #farm at Yass River, their only regret is not having done it sooner https://t.co/2TPkKpJ8NG (1 hour ago)