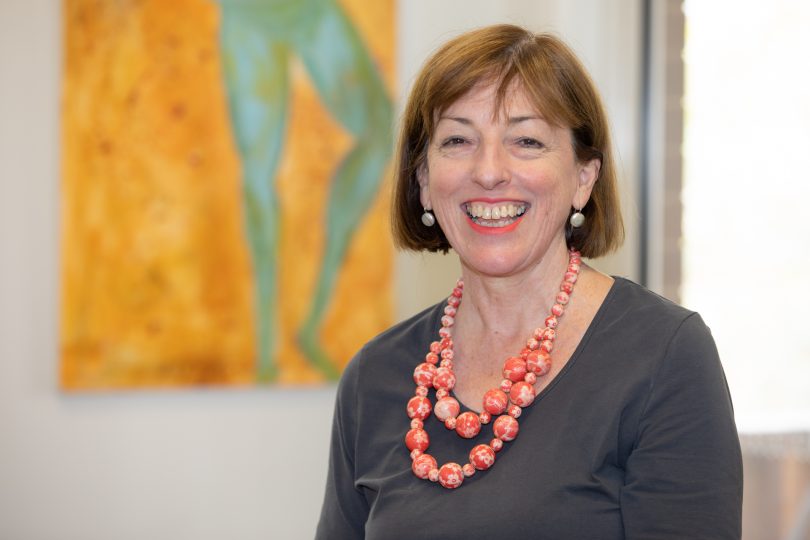 Marie-Louise Corkhill has been the director of Karinya House for 22 years. Photo: Michelle Kroll.

They both meet a desperate need in our community. They’re both local to their bootstraps, depending on us all to help them do their work. And without them, vulnerable mothers and babies, and troubled young men would be at immensely greater risk. That’s why Region Media is proud to announce new community partnerships with two homegrown Canberra organisations that do extraordinarily important work in our community: Karinya House and Menslink.

Over 22 years, Karinya House has supported around 2500 women, not including their children and family members.

“We meet women where they are at, usually in crisis”, says director Marie-Louise Corkhill. “They are homeless, pregnant, have children, are trying to leave a violent situation. They have no support. That’s probably our hallmark. The women we walk alongside have no other support in their lives.”

Marie-Louise has been at Karinya since before the doors opened at what was then a tiny cottage in Giralang. Friends thought she was mad to take on such a demanding role in an organisation where she was the only staff member.

Today Karinya has more than 14 staff and a brand new facility built by the ACT Government where they can house up to 11 women and children, and support a further 30-40 in the community. Women from the ACT and across the border are welcome, although at any one time there is a waiting list of between 10 and 20, a situation that often sadly blows out at this time of the year.

“Every woman has two caseworkers and health professionals throughout their journey. Every woman works to develop their own individual co-designed plan for all aspects of their lives and that changes as they progress and work towards their own goals.”

Housing support is provided on-site, or Karinya will work and advocate with Housing ACT. Karinya also helps women navigate legal and financial services, immigration issues and even childbirth: some caseworkers have supported 20 or more women in labour.

A recent analysis of costs and return on investment shows the model’s value.

“If you do the work for what women need, without limitation, you can lay the foundation for even the most traumatised woman to move forward and for her child, too,” Jo says.

But it’s a costly project too. The ACT Government funds 24 support places, but at a level that Karinya says falls short for the very complex cases they often face. The remaining women are supported directly by the community.

Reducing service delivery would also compromise one of Karinya’s greatest assets in their highly skilled staff, but next year Karinya will run a projected deficit of $120,000.

They say that if the ACT Government would fully fund 24 places according to need, they could do the rest with Canberra’s help.

“The women know this community supports them”, Jo says. “That recognition and respect of their story is worth every bit of what we can do to help them”.

Menslink also has a distinctive, effective and homegrown model for the transformative work it does with troubled and vulnerable young men. Founded in 2002, it targets the young men who are overwhelmingly represented in adverse community statistics from school dropout rates to incarceration and suicide.

It does this through educational sessions, intensive short-term counselling and longer-term mentoring support from positive male role models, especially for young guys who are socially isolated, or for the 17 per cent of young men who no longer live with their father.

Participants learn social skills, create support networks and become involved in the community, alleviating some of the social isolation they feel in their lives.

Director Martin Fisk says that 2019 was a record year, with increased activity across all the programs Menslink runs.

“Counselling sessions are up 10 per cent, Silence is Deadly sessions up 30 per cent. There’s been a massive 50 per cent increase in the number of young guys being actively mentored and our PRIDE Group Program growing by nearly five times from this time last year.

“More than three-quarters of schools surveyed about the impact of our counselling or PRIDE group program told us we had a positive or very positive impact on their students’ relationships with teachers and other students, anger management, confidence and self-esteem, and that we had an impact on reducing levels of stress and anxiety as well as anti-social behaviour.”

Region Media is proud to offer Karinya House and Menslink our support as community partners as their dedication and selfless work bears fruit for our whole community.

Thank you Riotact for your amazing support not just of Menslink but so many great organisations and people in our community.

And thank you Karinya House for doing such great work with mums... such important work and much needed in the community.

Merry Christmas to the ever amazing Karinya staff and volunteers xx

Jackie Saunders Thank you and all your colleagues. Fabulous partners.

Thank you. So very proud to stand alongside Region Media - Canberra Region and community partners like Menslink. We live in a very special Region. 👏🏽👏🏽

Dani Hache - 10 hours ago
Whilst this is 100% accurate, it cannot be fixed with the government failing to invest in an APS workforce. These businesses... View
Bill Bloxham - 11 hours ago
Been going on since Adam was a boy View
David W Jones - 13 hours ago
Just look at the number of contractors that just keep getting extensions or renewals with no questions asked! View
News 6

jam - 10 hours ago
The tram is more easily accessed by more people as it encourages dense development within its reach. It isn’t really possib... View
bj_ACT - 11 hours ago
The issues with the Bus route changes and the loss of bus stops for Tuggeranong in 2019 were obvious to anyone with half a br... View
Winkie Wee - 13 hours ago
I'm lucky in that I live within a short walk to either the R4 or R5 buses. I use the bus quite a bit unless both of us need t... View
Breaking 4

jam - 10 hours ago
That said, though, bikes are required to slow to around 10km/h before crossing - a bike crossing at the otherwise speed limit... View
jam - 10 hours ago
It is not “bugger all inconvenience” it actually makes a big difference when it is your commute! When I drive past a cros... View
liberalsocialist - 14 hours ago
What a disgrace. And while in no way taking away from this cowardly act, I have come from NSW where we are told to dismount a... View
News 161

Jimbo Lambert - 11 hours ago
Areas in Gungahlin haven't been mowed for at least 6 months! How hard is it to use our high rates money to employ some more m... View
Jimbo Lambert - 11 hours ago
Randy Goldberg you mean 6 months later? You must live in a more affluent area than Gungahlin, as it seems we have been alloca... View
Frank Arnold - 13 hours ago
Ohhh myyy Goddd !...Crooked pavements!...pot holes in our roads!...and now it's long grass !!!! FFS we hardly had any 3/4 yea... View
Community 6

kenbehrens - 14 hours ago
That makes no sense. Your comparisons are 20-25 years apart. The "new" bus route takes longer because it services a bigger ar... View
bj_ACT - 14 hours ago
Not sure about the adding 10 minutes to the 333 journey by changing to go past College St and UC. The change Only added 1.2km... View
michael quirk - 19 hours ago
Yes,but it is by no means certain that light rail stimulates urban redevelopment more than BRT. Much depends on design of the... View
News 1

Stephen Saunders - 16 hours ago
Thanks, I wasn't aware of this. Those who care about the Eurobodalla bush should log in to the disgraceful "Dalmeny Land Rele... View
News 7

rocca66 - 18 hours ago
I was staggered to think there could be 30,000 public service compensation claims. View
News 15

jwinston - 20 hours ago
Glad you asked JD. Allegedly Aboriginal and Torres Strait Islander people are incarcerated at higher rates than others. The i... View
News 58

JS9 - 21 hours ago
All this highlights again is a) How ridiculously stupid the retail electricity approach in Australia is in general (basically... View
show more show less
*Results are based on activity within last 7 days

@the_riotact @The_RiotACT
The @MoAD_Canberra has given the Speaker’s Suite at Old #Parliament House a makeover, taking the décor and setup back to when it was occupied by Australia's first #female Speaker, Joan Child https://t.co/q2jV4nSVAz (10 hours ago)

@the_riotact @The_RiotACT
Hot in the City: You knead a box of The Bite CBR’s pretzels in your life! https://t.co/6b3M1kuAyH (11 hours ago)