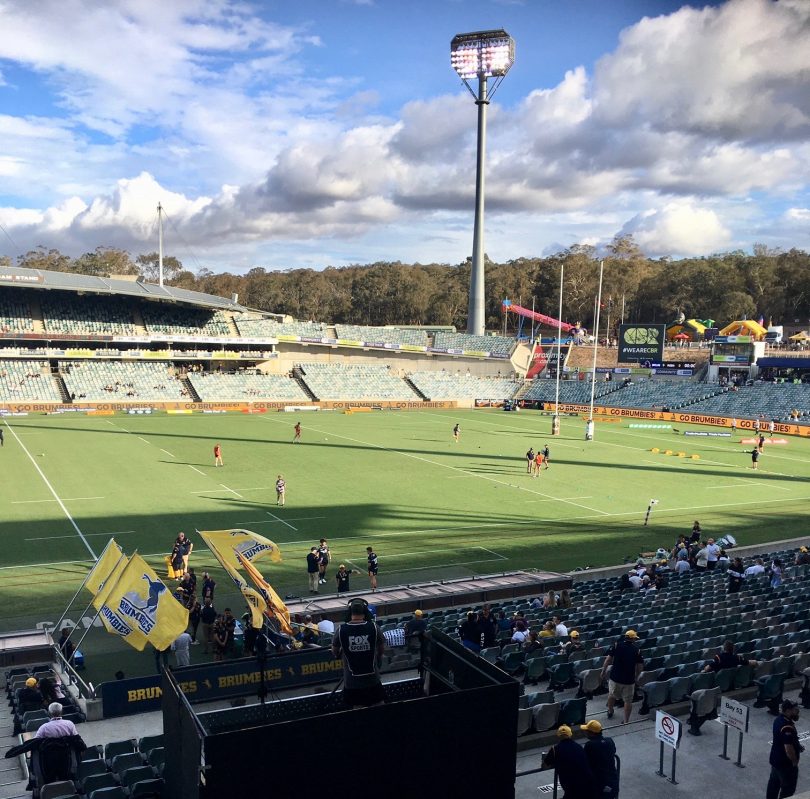 There’s more than a touch of déjà vu with the ACT Government revealing in its mid-year budget review that $200,000 has been allocated for a feasibility study into the location of the proposed new indoor sports stadium.

It seems as though we’ve been through this process before, with the Civic pool site deemed the preferred location for the new home of the Raiders and the Brumbies.

But just when you thought the issue had been settled, obstacles emerged.

The Commonwealth has delayed its decision on what will happen to the AIS site on which Canberra Stadium is positioned. It’s currently costing $350,000 a year to rent the stadium from the Commonwealth. Understandably, the ACT Government is reluctant to spend money on a rented facility nearing the end of its existence.

Funding, of course, became tight for the ACT with considerable budget expenditure allocated to Mr Fluffy and the light rail. And then came the caveat that Canberra would need to have an A-League team to make a new stadium viable.

Given the issues facing the A-League as a whole, I wouldn’t be holding my breath.

More recently, there have been concerns about Parkes Way and the positioning of a rectangular stadium on the reasonably small pool site. This was before Exhibition Park emerged as an option, as well as the possibility of building on the existing Canberra Stadium site at Bruce.

You can’t help feeling as though we are going around in circles with this whole process.

Exhibition Park entered consideration because light rail could transport fans to and from the stadium.

But light rail was also one of the reasons the Civic option was attractive. Civic is also close to restaurants and bars, so the economic benefits would extend beyond the sporting event itself.

Across the world, the trend is for sports stadiums to be located within a city precinct. An exception was the construction of the Olympic Stadium in Sydney, but a civic precinct is now being developed around the Olympic Stadium, rather than the other way around.

Both the Raiders and the Brumbies have made clear their preference for the Civic pool site.

But what about the fans? Will they be consulted in the process? It would seem obvious that people upon whose support the viability of the stadium will be crucial should be part of the process as well as those who use Civic pool.

I just hope that once the feasibility report is finalised that there is more certainty on a timeframe for construction.

Give it a face lift

But the money into the tch

A City Stadium would easily be the worst planning decision in Canberra history if executed.

Renovate Bruce Stadium in stages like the Sydney Cricket Ground.

Leave it where it is, bring back that 20th century thong of busses and everyone will be fine. Afterall they only get 7000 at a brumbies game.

I thinkTCH is more in need of the money.

I didn’t miss the irony of suggesting ‘when the feasibility study’ is finalised, that the key outcome is certainty on a ‘timeframe for construction’. Surely a feasibility study should be about whether something is actually ‘feasible’ I would of though – I do not consider at all that the feasibility of a new stadium has actually been firmly established, nor whether it stacks up on a cost benefit basis.

How about housing the homeless instead.

A new stadium will go the same why as the cinema in Gungahlin. Every election labor with dust off the plans but no boots ever hit the ground.

The sleepy hollow that is Civic needs this.

shouldn't the commonwealth give the Bruce site back to the ACT Government when self govenrmrnt was rejected by the ACT electorate???

Stadiums should be built with sports teams money with land they bought.

A precinct is a great idea but we don’t have the infrastructure.

City makes more sense especially given the density increase in the inner north & south and the light rail nodes.

Why is there a need for a new stadium. Are the residents who moved into the area after it was built complaining about the noise.

The MIA Labor Greens Government always tease the electorate about a new stadium and a new convention centre in an election year.

George Lemon along with fast rail to somewhere... Or this election maybe light rail to Tuggeranong.

Leave it where it is and do it up. Cheaper and plenty of parking.

Ari Rex - 31 minutes ago
Thanks a lot for the interview The RiotACT ❤️ View
Ari Rex - 32 minutes ago
Fenji Stradwick You are so kind 😊 View
Shirley Hadfield - 1 hour ago
Beautiful Shot. Would love to Purchase a copy! View
Food & Wine 33

chewy14 - 3 hours ago
Stephen, I have no idea what you think I have to do with Stanhope but why would I move on from poor planning? If people voted... View
News 3

Chris Hart - 3 hours ago
Jasper Roo seems to be a pattern with Nrma. View
Trish Roberts - 17 hours ago
As a Housing ACT tenant there’s not much I personally can do to prepare. View
Jasper Roo - 18 hours ago
I’m still waiting for the repairs to my roof to be completed from the hailstorm in January. Thanks NRMA 🙄🙄 View
Opinion 52

Geoffrey Bell - 7 hours ago
The money is in the land if you want to upgrade down the track, steer clear of apartments. Rentvest is another way to get on... View
Julie Macklin - 15 hours ago
Rheyce Spears Did your mother and grandmother have male guarantors? View
Andrew Dale - 17 hours ago
A 1 bedroom apartment is all you will get for 350k View
News 19

HiddenDragon - 16 hours ago
A sovereign aerial firefighting force should have been established long since - it could have easily been afforded back in th... View
Lin Van Oevelen - 17 hours ago
John Moulis The cause of the fires was said to be the fast growing grass and undergrowth because of more rain, so that does s... View
Capital Retro - 20 hours ago
Lets debunk this notion now that climate changed was the cause of the 2019 - 2020 fires. The Ororral Valley fire was ignited... View
News 17

Lynn Stape - 19 hours ago
agreed... I couldnt think of much worse than cleaning in a hospital at the moment... talk about front line staff.... View
show more show less
*Results are based on activity within last 7 days

Leadfoot drivers beware - the ACT's speed detection net is about to be widened with the addition of two new...
Lifestyle 5

When the night sky lit up with multiple lightning strikes over Black Mountain in January 2019, Canberra photographer Ari Rex...
News 10

The ACT's mowing team is battling to stay on top of exploding grass growth in a season vastly different from...
Food & Wine 33

A short menu that’s long on authentic flavours is a winner in any language. A handful of traditional dishes interspersed...
Opinion 30

The ACT Greens have been on cloud nine for the past week but now it's time to come down to...
Food & Wine 32

The village feel is back in ‘Old’ Kingston! The beautiful suburb with its luscious treescapes and green spaces has been...
News 19

Time for action on an indoor stadium in Civic

Should the new stadium debate shift to Turner instead of Civic?

If ever there was momentum to justify building a new stadium in Civic, it is now

@The_RiotACT @The_RiotACT
The Bega Valley’s iconic history of cheesemaking continues thanks to businesses like Niagara Lane in Kameruka https://t.co/1WZDQivJFV (44 minutes ago)

@The_RiotACT @The_RiotACT
Bushfires and pandemic add extra pressure for new mums in the ACT and southeast NSW https://t.co/DUeAKAq5Yy (1 hour ago)

@The_RiotACT @The_RiotACT
Tiny pardalotes are more often heard than seen in Canberra. But what does their silvery call say? Naturalist Ian Fraser has a few ideas https://t.co/n2a3MyuRZR (4 hours ago)