In uncertain times,
we give you certainty.
21 February 2020 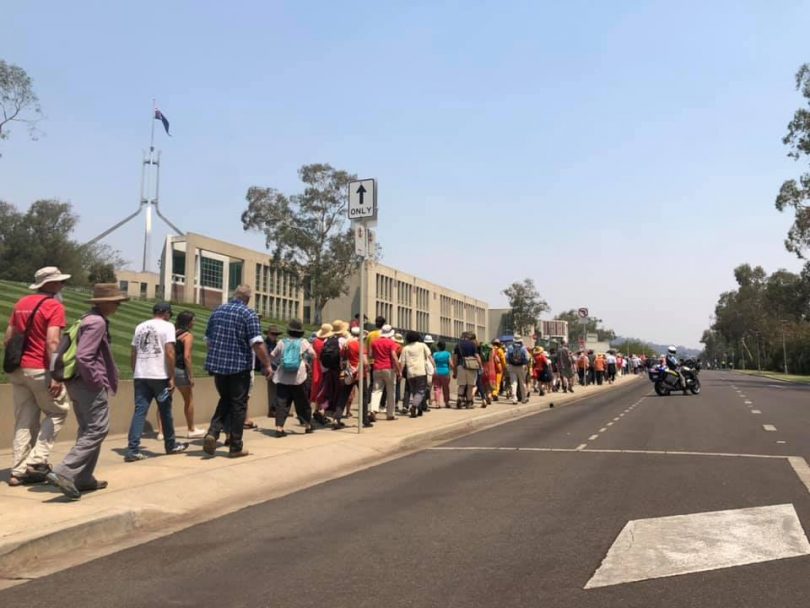 Many people saw the coverage earlier this month of the People’s Climate Assembly protest, which coincided with the first parliamentary sitting week of the year. People from all over Australia converged on Canberra, including Indigenous leaders, to ensure their voices were heard.

But the People’s Climate Assembly was about more than protest. It was also a four-day climate gathering.

In a tent at the back of the Parliament House lawns, groups of people gathered to share knowledge and ideas while music such as Johnny Huckle’s songs, and activist artwork, flourished around them. The event included workshops on topics such as ‘How do we write humanity’s restoration story?’ and ‘Liveable cities and infrastructure’.

“Our democratic systems are not up to the task of confronting the climate crisis and are really ill-suited to enabling us to survive what’s coming,” Canberra resident, former federal Greens candidate and director of the Green Institute Tim Hollo said.

As someone who describes his work as being at the intersection of climate change and democracy, holding an event about democratic reinvention and the climate crisis on the Parliament House lawns held great appeal.

So when he first heard that the People’s Climate Assembly was being planned for Canberra, he got in touch with the organisers to put forward ideas about the workshops. Others joined in and before long a working group had formed to make it all happen.

The objective of the workshops was not to make decisions about what to do next. Instead, they were an opportunity to generate a national network of active, skilled citizens who are engaged in participatory democracy in their own communities.

“We wanted to bring people together from all over the country, give people a really good experience of what a deliberate participatory discussion is, how it works and how to facilitate it. Skilled up and ready to go back to their own communities and implement them there,” Mr Hollo said.

The discussions at the workshops were generated and directed by the participants, who came from a diversity of community, political, activist and academic groups. The ideas ranged from Indigenous justice to mental health to the arts to environmental custodianship practices.

“Our current system tells people that their role is to turn up to vote once every few years, then shut up and go home. You’re a consumer, not a citizen. Your voice is irrelevant at best, problematic and unwelcome at worst, and don’t protest,” Mr Hollo said.

He described the People’s Climate Assembly workshops as creating a framework for people to have conversations about how we want democracy to work and how we want our country to work.

“We want citizens to come together to determine our common future.”

He called for the flow of ideas to be reversed, so government serves the people rather than people being consumers of the government’s output of ideas.

“Democracy has been flipped such that it’s about government and industry, and citizens are an afterthought. It should be democracy for, by and of the people,” Mr Hollo said.

Emma Davidson is a candidate for the ACT Greens in the upcoming Territory election.

Do you think our system of democracy is able to respond to climate change?

This article could have been a lot shorter:

“People didn’t vote the way I wanted them too and have different political beliefs than me. Therefore democracy is broken.”

The Dunning-Kruger effect is a type of cognitive bias in which people believe that they are smarter and more capable than they really are. Essentially, low ability people do not possess the skills needed to recognize their own incompetence. The combination of poor self-awareness and low cognitive ability leads them to overestimate their own capabilities, for example to nominate for the ACT Greens in the upcoming Territory election.

Perhaps it would be useful to try encouraging more voices in our public debates because it seems like we only hear the powerful vested interests who seem to think they know what’s best for all of us but I don’t trust them.

“We want citizens to come together to determine our common future.” They do – they can choose to become our representatives in our Government, and other citizens can elect them at the ballot box. That is how our method of Government works. As a side note, we live in a constitutional monarchy not a technical/strict democracy – which I think works quite well for us when all is said and done.

Bob Cheney Why would we want to get rid of the current govt when they’ve achieved a city that runs on renewable power and has the best developed climate change policy in the country (with the help of the Greens). Unless you think those are bad things of course.

There wasn’t anything of substance in this article. So the “workshop” was basically an “expression of interest”?

Australia already had some pretty socialist ideas such as public schools, hospitals and roads. Don’t forget medicare and Centrelink as well

Henry Kivimaki We have a social democratic system which the Conservatives in the house on the hill are trying to dismantle and sell off to their donor funding mates. The form of grass roots democracy Tim talks about sounds interesting and involving, unlike the current form which so many have disengaged from. Good to see at least someone talking about new ways of doing things when we’re in this long running stalemate on climate action. The best thing is to stay open and engaged.

Henry Kivimaki what’s wrong with socialism? It’s a better use of our taxes than building war machines and subsidising mining corporations. We have a form of socialism anyway but only for the wealthy and the business sector. Let’s change it to include the community. Let’s fund health, education, low cost housing and community services more generously and hence expand the economy and grow more jobs.

Daniel Evans I think listening is the antidote to totalitarianism.

I was going to say that sounded like an old-style-Green love-in and I wasn’t surprised to then see the author is indeed a Green; and there is nothing wrong with that.

This is not democracy. It is a parody where only those with the same views participate and anyone with opposing views is excluded or howled down. A real democracy recognises that society has competing interests, embraces a diversity of views and seeks consensus. Any group that excludes opposing views is by definition autocratic and by nature anti-democratic. They are the greater danger to society.

Where do you read exclusion of anyone in this article? The whole point of this type of process is to open democracy up to everyone. to take part in as deeply as they want to.

Any how many people with opposing views to yours on climate change have been invited, or would be listened to respectfully, their ideas considered and compromise sought? The Greens idea of democracy is dictatorship of thought and action because they arrogantly think they know what is best for the rest of us .

You cant seriously believe that.
The whole show by design (intentional or not) is optimised for left leaning urbanites who are not employed in mainstream occupations.
How on earth can this be representative when you have excluded the vast majority of citizens simply due to location, timing, political persuasions, family considerations and employment status? (collective noun = majority?)
Just because you claim it is “a national network of active, skilled citizens who are engaged in participatory democracy in their own communities” does not make it so. If nothing else, be honest with yourself.