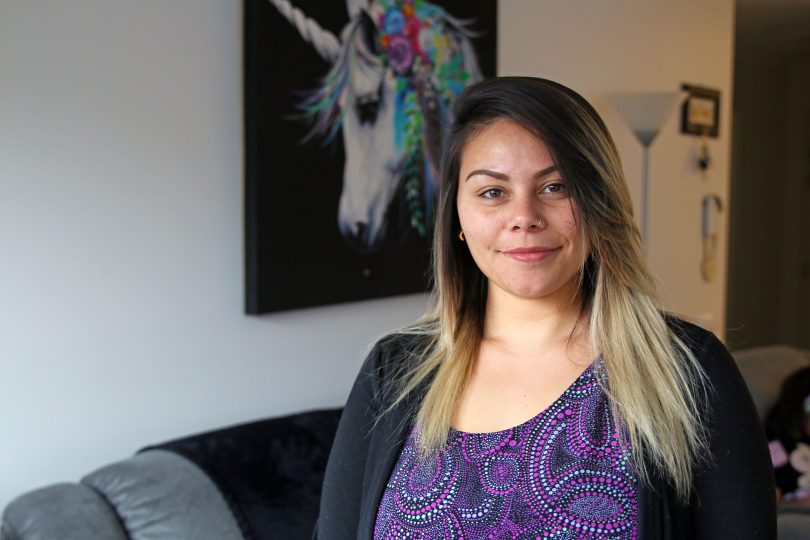 Amber Jarrett is living in a one-bedroom apartment in Canberra with her four children. Photo: Supplied.

No rental properties in Canberra or Queanbeyan are affordable for people on JobSeeker payments, according to Anglicare’s latest annual rental affordability snapshot. That’s despite the government doubling the payment during the coronavirus shutdown.

The social advocacy organisation’s annual rental snapshot was taken on the weekend of 21 March by looking at rental properties in Canberra and Queanbyean listed on realestate.com.au, Allhomes and Gumtree.

It then uses the same rental property listings to provide an analysis of how affordability would change for low-income households if the temporary coronavirus supplement was made permanent.

The survey deems a suitable rental to be one that costs less than 30 per cent of a household’s income (a commonly used benchmark for affordability) and has an appropriate number of bedrooms.

The report, now in its 11th year, painted a stark picture for low-income families living in Canberra and Queanbeyan. It showed a long-term decline in the number of affordable private rental properties in the region, with no properties available across almost all of the 14 different household types surveyed.

The report found that while doubling the JobSeeker payment was substantial for those on the lowest incomes, the increase of $550 a fortnight made very little difference given the high demand in the ACT and Queanbeyan rental markets.

Only 2.5 per cent of properties were deemed suitable for a single person on JobSeeker. For a couple or a single parent on JobSeeker with two or more children under 10, there were still no affordable or appropriate rentals with the supplement.

The survey showed there were 1201 private rentals advertised in the ACT and Queanbeyan region on 21 March. Not a single property – not even a room in a share house – was affordable for a young person on JobSeeker or Youth Allowance. 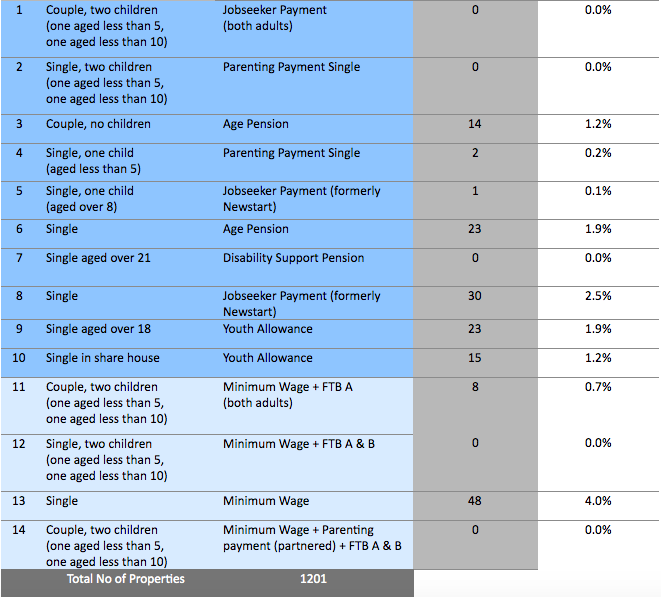 Rental affordability in the ACT and Queanbeyan, by household type and percentage with coronavirus supplement increases taken into account. Photo: Supplied.

The director of St John’s Care in Canberra, Sarah Murdoch, said their service saw the impacts of extremely limited housing for vulnerable families.

“The numbers are growing and we already assist over 100 families a week,” said Ms Murdoch, who works in partnership with Anglicare to deliver emergency relief services including food, clothing and case management support.

Ms Murdoch described the situation as catastrophic, with some people choosing to go without food to pay rent.

“We also don’t know what the long-term implications of COVID-19 will be for people, particularly in terms of job loss which is one of the biggest emotional and financial stressors on families. While we welcome the increased JobSeeker payments and the introduction of the JobKeeper payments, the reality is that there simply isn’t enough affordable housing available for low-income families.”

Ms Murdoch said a further concern is that fewer people have felt safe enough to attend the service for help since the COVID-19 restrictions.

“We are phoning those families who see us regularly to check they are all right and to arrange for food to be safely distributed. We urge people to contact our service if they are in need and not wait until their situation deteriorates,” Ms Murdoch said.

Amber Jarrett is a single mother who lives in a one-bedroom apartment in Canberra with her four children after she moved from the South Coast when her relationship ended. While Ms Jarrett is grateful to have a place to call home, she said her housing situation was still difficult.

“Without the support of organisations such as Anglicare and St John’s Care, I don’t know where I’d be – probably still couch surfing,” she said.

“I had to move from the South Coast to Canberra at the end of last year and for a few months stayed at relatives’ homes. Every few days I had to pack up and move with my four children. It was terrifying and really unsettling for my kids.

“Having five people living in a one-bedroom place isn’t really a long-term solution, but it’s better than some other families who have nowhere to go, especially after the bushfires,” Ms Jarrett said.

Anglicare’s rental affordability snapshot surveyed almost 70,000 rental listings across Australia and found that there is still a chronic shortage of affordable rentals nationwide, even after recent welfare increases.

“Our rental affordability snapshot once again shows that the Canberra and Queanbeyan private rental market is completely unaffordable for people on low incomes. We need urgent action from the Federal and Territory governments to address the region’s lack of social housing and to ensure people have enough money to have a home, and live a decent life,” Ms Murdoch said.

The Federal Government has said it was too early to say whether the JobSeeker payment would be increased after the coronavirus restrictions were lifted.

Yet these people are the ones who keep voting Labor in the ACT elections.

The cost of rentals is so high because the Barr government continue raising rates. Landlords pass that cost on to tenants. The cost of living in the ACT is so high largely because of ACT Labor and their constant rises in taxes and levies to support their irresponsible spending.