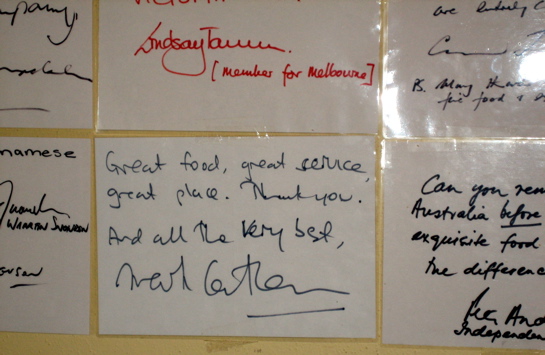 There’s an odd little gem of a restaurant lurking in the Griffith shops. It’s a good honest suburban Vietnamese restaurant. They can happily sit a large group down to a cheap and tasty banquet, and they’re very friendly to BYO.

The value for money is reason enough to go, but they’ve also got a very interesting gimmick. Due to their inner south location, and the ability of a politician to sniff out a good deal from miles away, they’re frequented by the nation’s Members of Parliament (not normally sighted in the general community) and it’s become a tradition for visiting celebrities (and aspiring celebrities) to write a commendation on a sheet of A4 and the restaurant duly laminates it and sticks it on the wall. As you can see in the above picture Mark Latham and his childish scrawl were enthusiastic regulars (and if the public had seen it before the last election he might well have lost even bigger). 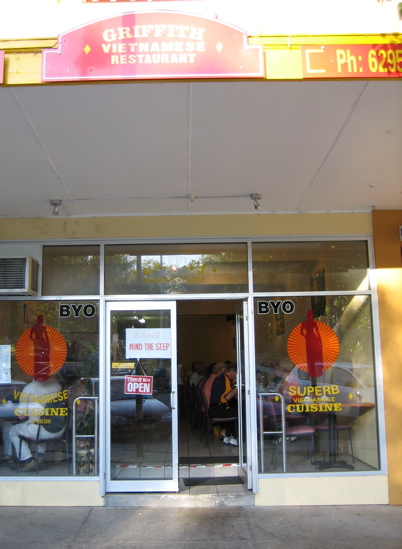 The result is endlessly fascinating to the politically minded. The conversation over dinner can wheel for hours on the subject of each MP’s note. What do you think of the hand-writing? What about the message?

It is frankly astonishing how many well meant messages manage to be racist and ignorant and that too can keep the cognoscenti chattering through the entrees. A good example is Ten’s Bonge and his effort, particularly considering how many Vietnamese in Australia fled the communists. 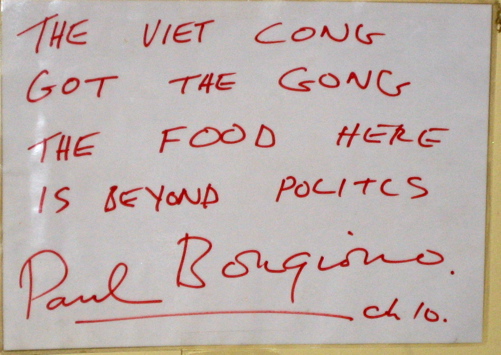 Would-be-if-they-could-be types also have a section of wall and are almost as amusing, if only to see who has tickets on themselves in our community. RiotACT asked for permission to take photographs inside the restaurant but did not feel the need to shamelessly self-promote. 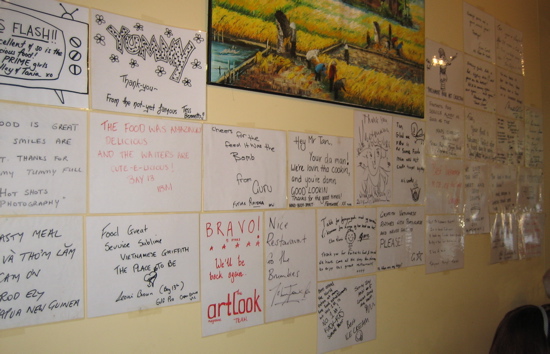 The service is, by the standards of family run suburban restaurants, absolutely top notch. Competent, friendly, and all importantly letting people know how many serves each are on a dish, a must for banquet dining. No longer do you need to count all the spring rolls and divide by 17 to figure out how many you can take as they swing by your place at the table.

Also importanlty for a banquet they’re more than happy to take a budget (“we’d like to pay $25 each”) and go away and cook to it. No muss, no fuss, no time wasted negotiating agreement from a large group trying to comprehend a long menu. Just sit back and let yourself be surprised.

Aside from the significant entertainment of the testimonials what makes the place is lots of good, tasty Vietnamese (and a bit of malay) food at a very reasonable price in a friendly atmosphere, and no hassles.

Hi
I think this Griffith Vietnamese Restaurant is run by the same people that run the Kinh Do at Macquarie Shops where the food is really good and cheap.

I wanted to find the phone number for this restaurant and this RiotACT post was the first Google response!

Some further history on this gem. This is in effect the same Vietnamese restaurant that used to be on the corner at O’Connor Shops (where All Bar Nun now resides). In the late 90s they moved into a downstairs location near Hobart Place in Civic (was previously a Tapas bar). Being in a basement, they were unlucky enough to get flooded which forced a temporary closure. Some time after that they moved into their current Griffith location.

I’ve been enjoying the food from these guys for many, many years, and will hopefully be doing so again tonight.

no ATM pierce, but they’ll give you cash out while you’re picking up some drinks.

Is there an ATM in the Griffith supermarket?

I’d say Paul Bongiorno’s inability to spell politics is probably a greater concern than Latham’s penmanship. (Of course, given that they had both probably had a drink or 3 by the time the writing part came around, fairly human mistakes)

It doesn’t seem to give bad hand writing so i think we can assume that some things are unique to Mark.

Does the food give you pancreatitis?

Don’t give away all of the hidden secrets of the inner south! Next we’ll be seeing feature articles on Das Kapital, and you wont be able to move in there for all the RiotACTors.

They also do take away and phone orders. Intriguingly, their menu states they have ‘BYOG’, which I can only assume stands for ‘Bring Your Own Grog’ (at least, I think it’s Griffith Vietnamese).

All true JB, but a heads-up to all that it’s cash or credit only – there’s no EFTPOS available, and no ATM at the Griffith shops.

give it a go. it is quite nice. however, if you are not an Island of Floris Hobbit, you might find it a wee bit cramped.

Thanks for the review, we will give this place a try on the weekend…

Angela Moore - 12 minutes ago
"The Poplars" The Poplars are fell'd, farewell to the shade And the whispering sound of the cool colonnade. The winds play no... View
Sue McIntosh - 4 hours ago
Ho hum, what else is new? More trees given the chop. If council is so worried about the trees falling, then they should be re... View
Property 12

Chris Liddiard - 7 hours ago
Kirsten Madsen thank you for this. I’m sure she will be interested. She is really missing band at the moment. View
News 49