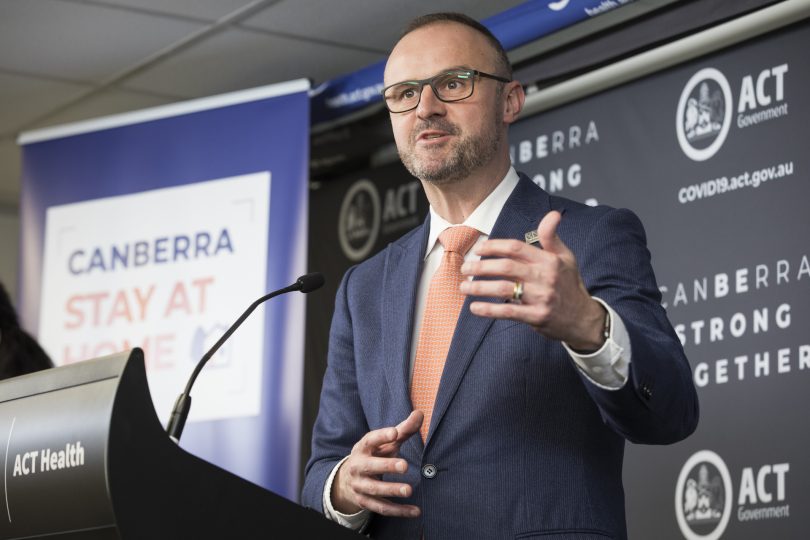 Chief Minister Andrew Barr has announced more businesses will be allowed to open this weekend under the next stage of the territory’s economic recovery path. Photo: Michelle Kroll, Region Media.

The ACT Government has loosened lockdown restrictions, announcing that cafes and restaurants across Canberra will be able to offer dine-in options for up to 10 patrons this weekend provided they still adhere to physical distancing measures.

“I am excited to announce that all areas of Tidbinbilla Nature Reserve are now open with the exception of the Visitor Information Centre, Nil Desperandum Homestead and the Koala enclosure which are receiving some upgrades,” Mr Gentleman said.

“The team have been busy repairing infrastructure damaged by fire and floods and upgrading various sections of the reserve.

“Some new additions include a new viewing platform on the Cascades and Lyrebird trail, path upgrades for the Sanctuary, and the Ribbon Gum Theatre has also been painted and revamped.”

Libraries in Dickson, Gungahlin and Woden will be open from Monday (18 May). These three libraries will be open on weekdays from 10.00 am to 5.30 pm but patrons will be asked to keep their visit to under 30 minutes and will not be allowed to sit down inside the branches unless they have pre-booked a computer.

Community halls that can accommodate 10 people with the appropriate physical distancing measures may also open.

Although staying 1.5 metres apart is not possible 100 per cent of the time, Chief Minister Andrew Barr said Canberras should act as if they have the virus, or the person they are in contact with has the virus.

Mr Barr also acknowledged that these new measures would only apply to a “small number of small businesses”. Alcohol still would not be allowed to be sold without food.

“This is the first, small recovery step for the industry and it is understood that it will only be economic for a small proportion of businesses,” Mr Barr said.

“The number of patrons will be gradually increased over the coming months in line with the national plan, making it economic for more businesses over time.

“Local hospitality businesses are encouraged to only reopen if the model works for them. Choosing to remain take-away only for now will have no impact on their ability to consider reopening as the maximum seated occupancy increases in the coming months.”

Canberrans should also take sensible and responsible actions when going to parks and playgrounds and to avoid large crowds to prevent, or contain, any future outbreaks, Mr Barr said.

“We know people are excited to leave their homes, but for the time being, we still have to hold back on the activities that we used to do over the weekend,” he said.

“Staying at home as much as possible and avoiding large crowds is still the best way to protect yourself, and your family, from any potential risk of infection.”

The Federal Government has released figures predicting that Australia’s monthly economic output will rise by $9 billion after the final domestic restrictions are lifted which Prime Minister Scott Morrison has flagged was likely in July at the latest.

A tangible threshold of COVID-19 cases, or more clarity about when lockdown measures would be re-imposed would be hard to set as circumstances continue to change, Mr Barr said.

The effective reproduction rate of the virus would have to remain below 1 (meaning that each person would pass the virus on to less than one other person on average) and the ACT would need to maintain the capacity to respond to local outbreaks for the slackened measures to remain in place.

At the moment, the ACT has an increased medical capacity to ensure that it can handle an influx of cases, Mr Barr said as he continued to warn Canberrans against complacency.

“We are preparing for the worst but hoping for the best.” Society will be re-opened in a “sensible, calm and measured way” as we learn to live with the virus, he added.

Robyn Jones - 24 minutes ago
Where is it located View
Monica Tiffen - 47 minutes ago
I find it hard to put a light-bulb in!!!!! View
Michelle Langsam - 4 hours ago
Lucy Baker. For any of your tribe ? How cool is this View
News 4

David Graham - 42 minutes ago
Is it on stalled or installed? View
Russell Nankervis - 7 hours ago
As if students could afford an apartment that close to the Parliamentary triangle View
Community 42

Peter Major - 1 hour ago
Hugo Young Ride in single file and comply with ALL road rules, do not impede the flow of traffic and there are minimal proble... View
Kirby Haines - 2 hours ago
lol sure, costs 10x in admin what it would recover in revenue. Where do you draw the line? Are you going to insist some gorml... View
Hugo Young - 2 hours ago
Adam Jovanovic I'll be sure to suggest to my cycling club that we start running groups rides on paths. A group of 15 people t... View
Opinion 53

Warren Brown - 5 hours ago
What a true grub ! View
Gulf Mike - 8 hours ago
Ted Bell Don’t believe everything you read (especially in the media). View
Opinion 155