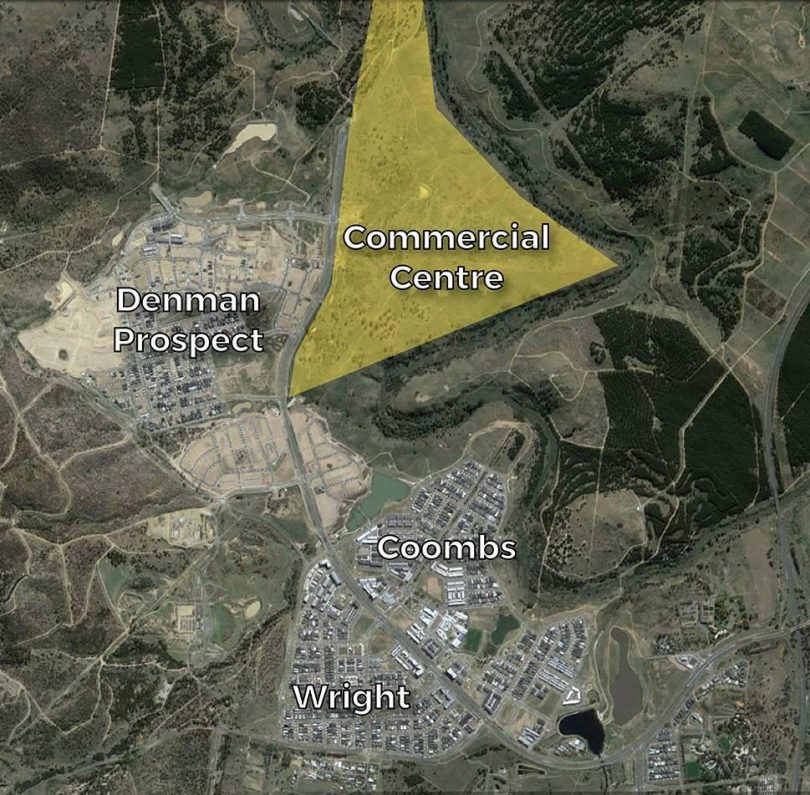 An aerial map of the Molonglo Valley showing the location of the proposed commercial centre. Photo: ACT government.

The concept plan for the development of the Molonglo Commercial Centre has come up short and the planning directorate has been told to go back and start again on key features.

The National Capital Development Review Panel’s report to EPSDD, aired at the recent Molonglo Valley Community Forum meeting, called out a range of failings and omissions, including some features that were part of the original 2014 plan.

EPSDD has contracted aerial and ground surveys of the site for the commercial centre, which will provide a hub for community, retail and service industries for the Molonglo Valley population of up to 55,000.

The panel said the topography of the site should be celebrated but the current proposal would likely require substantial cut and fill that would compromise the character of the landscape.

It said there were no plans to retain the many existing mature trees and urges EPSDD to accommodate remnant trees throughout the proposal so they can help regenerate the area’s ecology and provide amenity for residents. 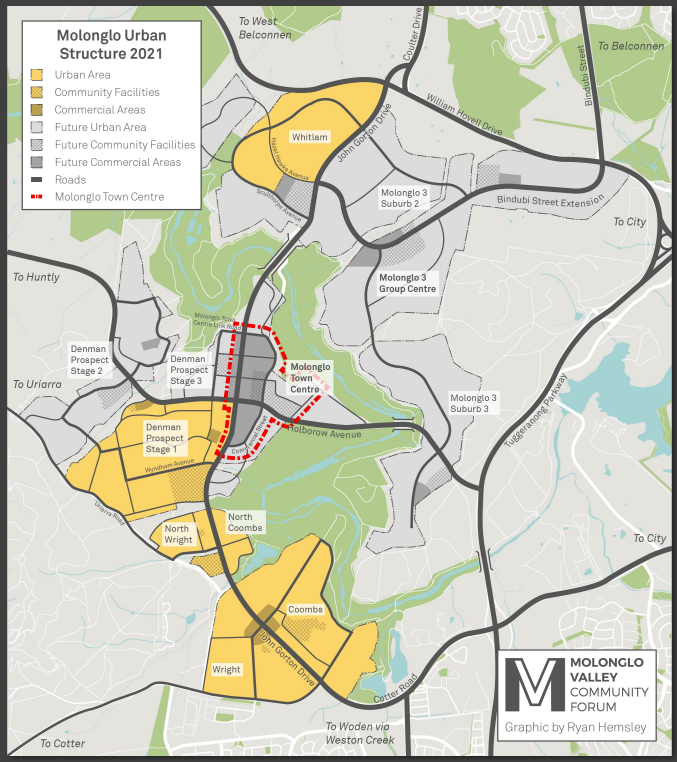 It found the distribution of densities lacking, called for a review of building heights and questioned the staging of development from the south, saying the the focus should be on the core services area to meet the needs of Molonglo residents.

Likewise, public and active transport infrastructure should be in place from day one so residents do not become used to using their own vehicles.

There was also no consideration of Indigenous history and cultural narratives.

Forum chair Ryan Hemsley said the panel’s finding was disappointing given most of the issues raised were included in the 2014 concept plan and are consistent with the Government’s own planning policies.

“Some of this planning work has regressed over the past seven years to the point that it does threaten current ACT Government planning strategies,” he said.

Mr Hemsley, who has been walking the site during lockdown, said there were very dramatic landscape features that should not be compromised and good mature trees that should be retained.

Public consultation on the group centre plans was expected to take place in about a year’s time and the forum would be pressing EPSDD for for the panel to review the plans again before it calls for public comment.

“A lot of pain and time and energy could be saved if the panel is able to positively influence the plan,” Mr Hemsley said.

“If we’re waiting for another 10 years for shops and community services and the like we’re in for a bit of rough time here in Molonglo.”

The Suburban Land Agency said the survey work would produce a detailed 3D model of the topography which will inform its future estate design and civil works.

It expected the work to be submitted by October. EPSDD’s planning work should conclude in 2022, and the first land releases are expected in the 2022-23 financial year.

Weston is like, a 10 minute bike ride away. I’d rather keep the trees, thanks.

I love the fact that the review picked up there were no plans to retain the many existing mature trees and it urged the EPSDD to accommodate remnant trees throughout the proposal so they can help regenerate the area’s ecology and provide amenity for residents especially because the loss of mature trees is a key threating process for our local wildlife. https://www.environment.act.gov.au/nature-conservation/conservation-and-ecological-communities/threatened-species-and-ecological-communities/key-threatening-processes

“no plans to retain the many existing mature trees”
So tree preservation only applies to trees on suburban blocks where they are a potential hazard for private houses?