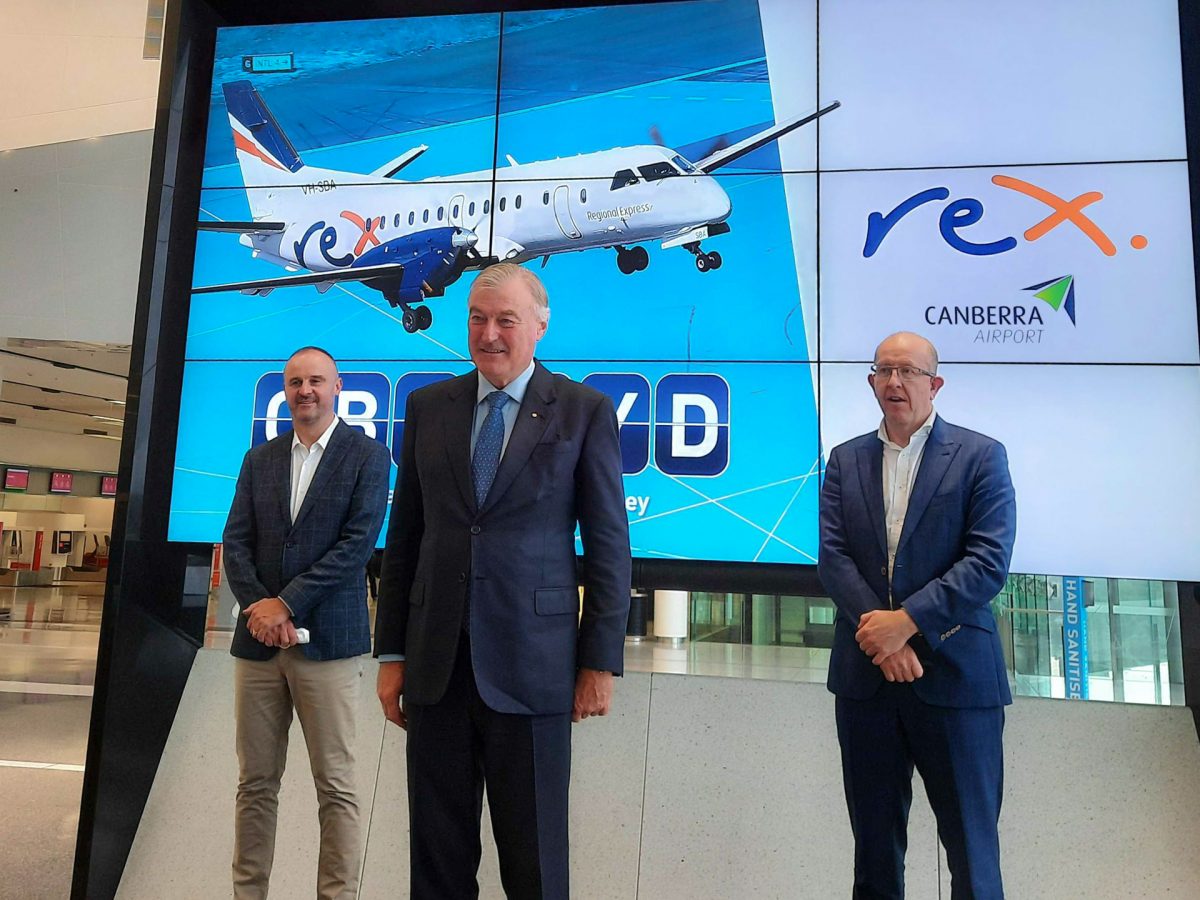 Rex will drop its Canberra-Sydney services from Monday, a little more than a year since the airline launched the route as part of an expansion of its regional and domestic network.

The axing of the service again casts doubt on the ability of the Australian market to support multiple carriers, with Rex blaming the entrance of an additional operator, Virgin, on the route and an increase in charges at Sydney Airport from 1 June.

Rex deputy chairman John Sharp said that the airline was proud to have brought competition to the Canberra-Sydney route and contributed to lower airfares.

“Unfortunately, with the entrance of an additional operator and the very high charges imposed by Sydney Airport from 1 June 2022, the route is no longer viable for Rex.

“The resources will be diverted to other routes which will provide a better return.”

A Sydney Airport spokesperson rejected Rex’s claims that its rising fees had contributed to the route’s demise.

“Sydney Airport made a number of attempts to support Rex’s operations on the Sydney-Canberra route, and we were making good progress on coming to an agreement,” the spokesperson said.

“Rex’s suggestion that Sydney Airport is partially responsible for them exiting the route is disappointing and inaccurate.”

Rex will also axe its services between Albury and Melbourne from Monday.

The last flights will operate on Sunday. Affected passengers will be offered free of charge rerouting or a refund.

A study also showed that the Rex flights would add $200 million to the ACT economy every year.

But from 30 January this year, Virgin Australia teamed up with Canberra-based Link airways to restart its service between the two capitals with up to nine flights per weekday on Link’s Saab 340 B Plus aircraft.

“Rex remains a valuable partner, and although we are disappointed about losing the Sydney service, we continue to work with Rex on their Melbourne service and any other future opportunities,” he said.

Chief Minister Andrew Barr said it was too early to tell what impact the decision would have on Canberra tourism.

He said that overall, the frequency on the Canberra-Sydney route had increased since last year with the Virgin/Link partnership now providing 10 flights a day on weekdays.

Rex is still flying other services out of Canberra, including to Melbourne, and Mr Barr said the ACT Government would continue to work with it on those routes and any others that might be proposed.

He said it was unlikely that another operator would step in to replace Rex.

“In the current aviation market, it appears that the passenger numbers to support three carriers was a difficult proposition,” Mr Barr said.

“We hope that as the market recovers and grows, Rex will consider other routes out of Canberra in the future.”

Yeah they cancelled our flights and won’t refund us for two weeks, nearly $500 for 3 return tickets. Now driving to Syd to catch our flight to Gold Coast.

Tony O’Connor Last time I flew I caught the bus to the Sydney airport. That way no car to worry about while away.
Other times if I go to central Sydney, I catch the train.

ReplyHide replies
William Chamberlain10:55 am 27 May 22

Having flights between Sydney and Canberra is a really environmentally poor choice in general.

Critical infrastructure like power, roads, water and airports should NEVER be privatised for profits…. the cost to the economy is well beyond any sale price…

Most of the travelers on the current service are retired and probably get travel concessions. The service must run at a massive loss.

ReplyHide replies
Clever Interrobang5:49 am 27 May 22

Most people who travel to sydney regularly don’t fly there

Sure, there are always people who need to fly to Sydney, but surely it’s never been profitable

Let’s invest in high speed train, as suggested for years.

Rach Heming to do HSR in Australia with union labour and all our environmental green tape wouln make it very expensive and so far impossible. We’ve regulated ourselves into a position where we don’t even make things, let alone build major infrastructure. Its sad…

Rach Heming agreed. HSR must go through Canberra and it can be done in a sustainable and environmentally friendly manner. It just takes will and focus to make it happen. We can do it and we should.

Wow. You people have suckled on the teat of the state for so long you have lost sight of reality. Canberra Sydney is an unprofitable route for airlines that is artificially propped up by politician travel. Be thankful you have them or you would be paying even more.

High speed rail will never come to Australia. The population is to small and government subsidies would be to high. It can not stand on its own two feet.

@clarkea Well said. Every time there is talk of a high speed train, the private consortia which show any interest immediately talk tax concessions and other government handouts because they know such a venture would not be profitable in of itself. Such an undertaking would be our light rail project on an even grander scale.

You summed up this article about light rail – spot on, you……

ReplyHide replies
Clever Interrobang5:53 am 27 May 22

I wonder how many of these people whining actually supported Rex when they where flying to Sydney. Or are you looking for something to complain about.

Very predictable… unfortunately.
And as for the Fast train… just upgrade the slow-last century train to be faster…
how many studies have been done on this?
CAG don’t really care, they have the monopoly and would love any train upgrades never to come to fruition.
Just fix it!

Take away Lounge Membership from the salary Sacrifice packages and then maybe a regional airline might get a chance to hold some of the market and stop the big players charging $199 CBR to SYD when the only charge $59 SYD to MEL!

Public Servants by-pass the “Cheapest Fare on the Day” rule because they have “Lounge” benefits with the big carriers and their supervisors don’t care. It costs tens-of-thousands in extra Travel Costs and Lounge Membership it available on Salary Sacrifice!

Did Rex get taxpayer funded COVID support like the billions of dollars that Qantas got?

Apparently Rex did receive government handouts, Capital Retro – https://australianaviation.com.au/2020/09/rex-increases-revenue-thanks-to-62m-government-aid/ … but not to the level that Alan Joyce squealed for and received.

Thanks JS. Qantas must have been very close to hitting the wall. A lot of super funds would have lost heavily if Qantas went under.

ReplyHide replies
Nicole Janezzyfield9:36 am 25 May 22

Caught it 3 weeks ago. It wasn’t even half full

Henry Maher early April, the flight was full and packed, not sure holiday season

And the rip off continues, what a disgrace

Would it be different if the provider of the government travel booking service was someone other than Qantas?

Onelia Herriot Arh no they’re not. QBT is the provider which Qantas sold in 2008 to Helloworld Travel now owned by CTM.

We really need a good train on this route. Should take two hours max. So wasteful to fly or drive such a short route

its mostly pollies on those flights anyway

Philip Vels not in anyones lifetime…..

Philip Vels . When the next election campaign in Canberra is under way, we will again be teased with the line that one of the “parties” will do a feasibility study into the likelihood of the construction of a high speed rail link from Melbourne to Sydney with a spur line off to Canberra, then, when elected, like all previous pie in the sky promises, it will be deemed too expensive and therefore, dropped. Perhaps if the station was located at the airport, it may get better consideration, because then they could charge like a wounded bull for parking. Anyway, good luck with that dream.

It’s simpler to drive take a train or bus. Just go point to point and no long security checks boarding and disembarking

Ben that was fast lol

I blame the labor party in Canberra for this fiasco!

Vijayendar Sridharan course you would…they are pulling out because of another carrier coming to Sydney and the huge increase in costs by Sydney Airport as of 1 June. Still blame Canberra Labor 🤐

Vijayendar Sridharan Did Labor sell off the airports and cause the high airport fees?

The cost of a Syd/Cbr flight was unviable, which is why it wasn’t used often. If the cost came down you’d have a lot more passengers

John Hamilton reasonable but not standard

Kim J Uriarau it was for Rex. That’s what they charged nearly all the time

ReplyHide replies
Shields Michelle4:29 am 25 May 22

Kim I agree. I have not seen one flight at the prices above.

$120 is more reasonable one way than $360 – true. But is not reasonable when considering you can fly Canberra to Sydney to Brisbane for $149. The draw back being to taxi twice in the most inefficient airport in Australia, Sydney.

Sad to see the competition go though as the other rates will go up, as will cancellations of flights.

The airport taxes at Canberra airport are ludicrous.

Darren Van de Aar Canberra is expensive but Sydney is over the top..

It was very profitable while the taxpayers were footing the bill.,

Does this take three minutes to fly? And a couple of hours at the airport? Lol. No wonder, most ppl would just drive.

Deanna Laenen it takes Rex a bit longer than say Qantas does because they use turboprop engine planes. In effect 40 min flight

QF dropped their turboprops on this route?

Rod Sloan no. The turboprop are still used on the route.

Nathan Chamberlain yeah sorry- big fingers there on the airbus. I know this because one of my fellow taxi drivers is totally into planes and their details pertaining to them. I try to stick to the basics- x flight is coming at this time and that’s all I care about so I can get a job 😄