Two bluestone outbuildings have become part of an exceptional home at Yass about to be auctioned. Photos: Supplied.

Long ago demolished, an 1850s granite homestead near Yass left enough of a footprint for an outstanding contemporary home to recapture remnants of a pioneering era, while embracing today’s leading design and technology.

Fiona Green of Canberra bought the property and ran cattle there for 19 years, then subdivided the block, protecting the former homestead site’s privacy on 10.5 hectares. She engaged acclaimed architect Rodney Moss, impressed with a home he had designed at Mollymook.

“I wanted a warm home with lots of light,” Fiona says. “There are no existing plans of the old homestead, but people in Yass remember it. It had a famous ballroom. Bluestone was still lying around. It had lots of weatherboards too.” 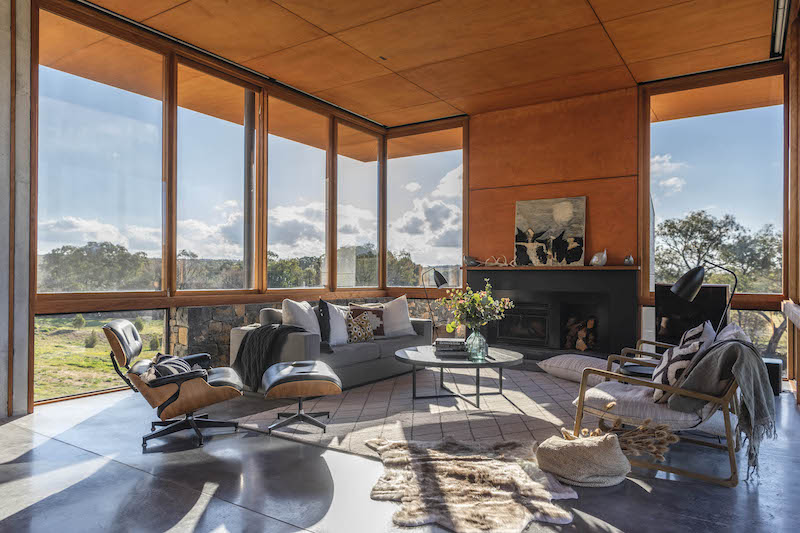 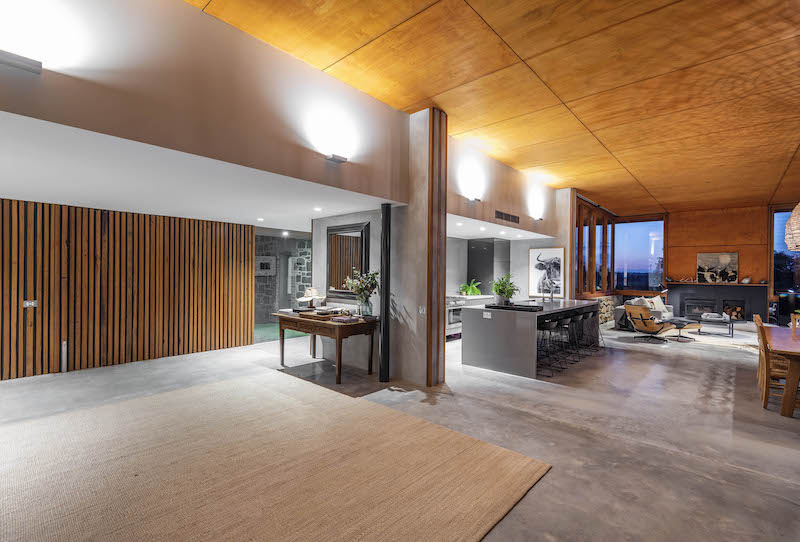 From Cox Architecture Canberra, Rodney Moss produced a stunning outcome that last year featured among the top 10 homes in 2018 on Australia By Design.

To reach 261 Kirkton Road, you drive across a couple of paddocks, through a long grove of gnarly old cedars, from where two original, bluestone outbuildings appear. Enter through the home’s new section between the outbuildings, walk along a cantilever to see the majestic Yass River meandering through the old river red gums. 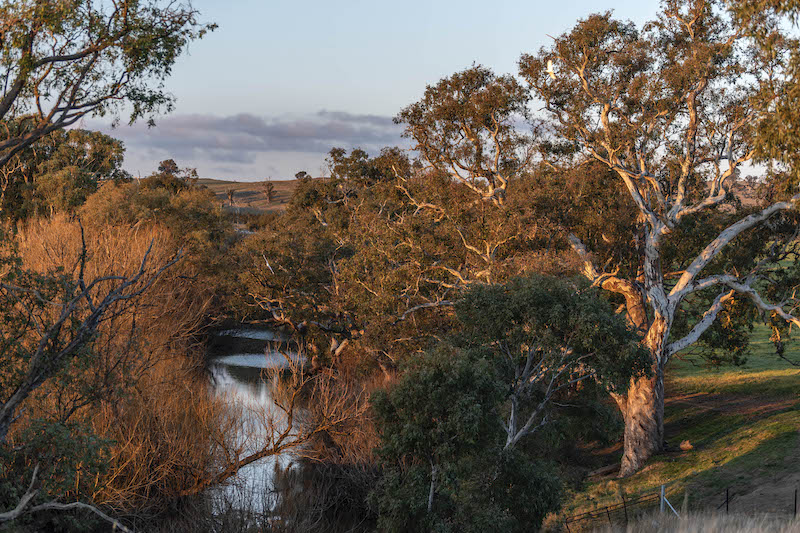 Views of the Yass River.

Now listed for sale by auction with Belle Property Kingston, this exceptional property close to Yass and 40 minutes’ drive to Canberra will go under the hammer on Thursday, October 10, at 5:30 pm on site.

On a slope with a north-east aspect, the four-bedroom, three-bathroom home has abundant bluestone walls probably built by convict labour.

“We used those two buildings as portal buildings, so you enter between them to a very contemporary house,” Rodney says. “The original house was built from fieldstone on the property, so we did the same thing to restore the little outbuildings and build new stone walls that form part of the contemporary house.

“The materials are the same bluestone, pre-cast concrete walls, timber windows and concrete floors. It is not a conventional building, it uses strong, robust materials,” he says.

“We saw his work and approached him, thinking no one would want to work with bluestone. Jack was working with sandstone at Willinga Park, and when we told him about the job at Yass he said, ‘I love bluestone, I’ll do it.’

“The young bloke was a goer. After spending eight hours building his walls, he would get on his road bike and go for a 100-kilometre ride and come back exhausted, go to sleep in his caravan, get up in the morning and do it all again,” Rodney says. 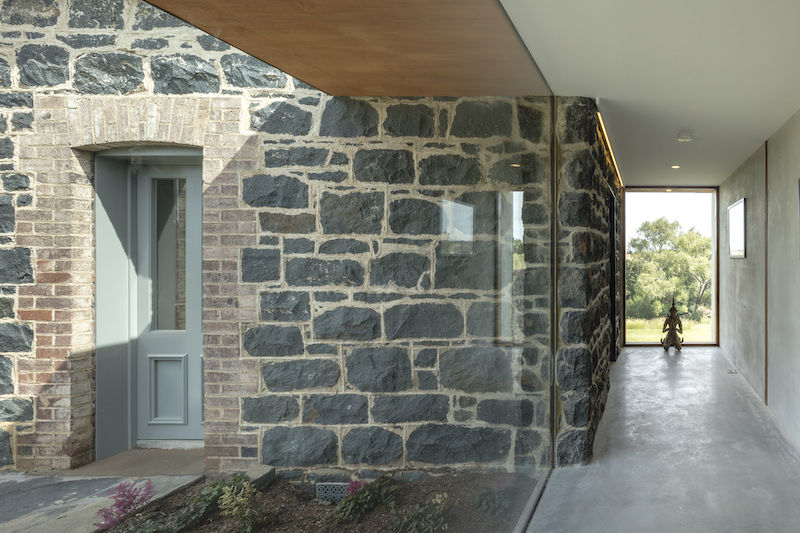 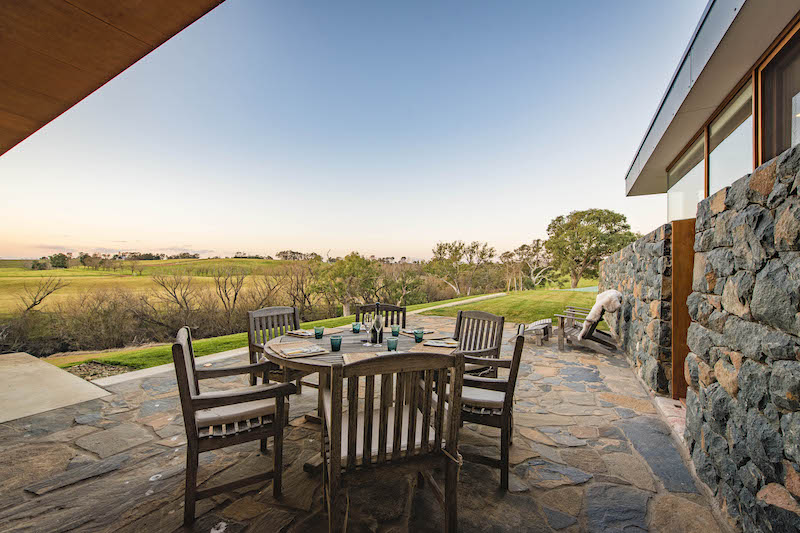 Bluestone was a strong feature in the construction of this house.

The architect has designed many high-end homes. He reckons 261 Kirkton Road is one of the better ones. Rodney says using geothermal hydronic heating and cooling to all the floors and for hot water is environmentally sensible and avoids drawing on the limited electrical power.

The vast interior has numerous entertaining spaces, banks of glass, natural light, stone walls and soaring ceilings. Remote control blinds throughout are recessed into the ceiling. The gourmet stone kitchen has Bosch appliances, two dishwashers and soft- close drawers. There are spacious contemporary bathrooms and a luxurious master suite which add to the excitement of this beautiful home which is surrounded by landscaped gardens and peaceful countryside.

Steph, Rachael- want to go in?

Steph Roberts – a bedroom each and one for a guest 🙂

Yep, perfect! Room for plenty of donkeys, chickens, alpacas too…

I don’t do envy/jealousy much but can I say Rodney that it is stunning and I wish I was 20 years younger and I’d buy it! 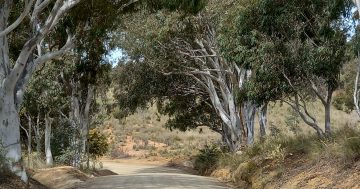 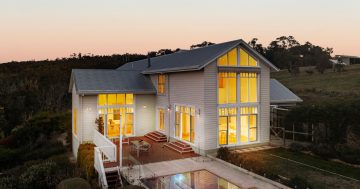