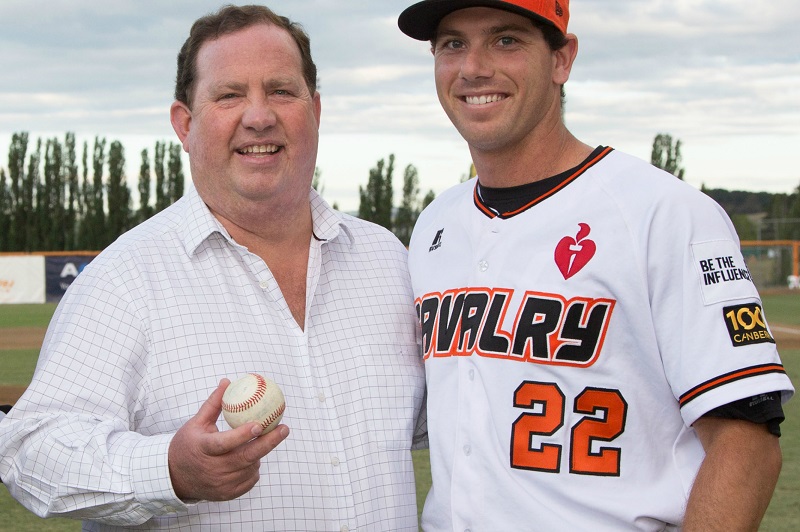 Strong support – Richard Rolfe (left) and the Rolfe Motor Group have been strong supporters of the Canberra Cavalry since 2010. Photos: Supplied.

Supporting Canberra’s local community through sporting teams and charities has been a driving force for the Rolfe Motor Group over more than 50 years.

As one of the ACT’s longest-running and most trusted car dealerships, the Rolfe Motor Group has been involved with leading sporting teams, charities and healthcare organisations as part of its philosophy of giving back to the community.

“We’ve always tried to be engaged with Canberra’s community by providing support to charitable organisations such as Lifeline, the Heart Foundation and the Canberra Hospital Foundation,” said Richard Rolfe, who is the dealer principal at the new Rolfe Peugeot and Citroen showrooms in Phillip.

The Rolfe dealership has also been actively involved with many successful sporting teams over the years, including the Canberra Raiders, Canberra Capitals and Canberra Cavalry baseball team.

As part of the company’s long-standing relationship with the Cavalry, Rolfe Peugeot is sponsoring the players’ jerseys this season and will provide the team’s import players with Peugeot cars.

Canberra Cavalry spokesman Dan Amodio said Rolfe Peugeot would have a “big presence” around the ballpark this year as the brand fits well with the Cavalry’s image.

“No business owner around Canberra has been more important to the Cavalry’s success than Richard Rolfe.

“He has supported the Cavalry since the very beginning in 2010 – As an individual, he provides a level of passion for the sport that only Richard Rolfe can!”

Due to his ongoing support, Mr Rolfe was recently invited to join the Cavalry’s Advisory Board to help steer the club’s future direction.

“He understands the important role sports play in our community and as a business owner, his corporate sponsorship has helped the Cavalry grow into the financially sustainable organisation it is today,” Mr Amodio said.

Mr Rolfe – a baseball fan and former high-level softball player – said he was looking forward to the new baseball season, saying there was Peugeot branding on the outfield fence that he hoped someone “would hit a few home runs over!”

Mr Rolfe said he was also incredibly proud of the charity work and involvement provided by the company, including for Lifeline Canberra.

The car dealership has been a significant supporter of Lifeline Canberra and the not-for-profit organisation recently purchased a new Peugeot 3008 SUV from Rolfe Peugeot and branded it with a call to action to volunteers.

Lifeline Canberra recently purchased a new Peugeot 3008 SUV from Rolfe Peugeot and branded it with a call to action for volunteers. Photo: Supplied.

Mr Rolfe – who drives the same Peugeot for his day-to-day car – said he firmly believed “you should drive the products you’re selling”.

“Peugeot is a great product, and I think these cars will become a viable alternative to many other popular vehicles on the market,” Mr Rolfe said.

Following the success of this partnership and local people seeing the prominent signage on the Peugeot, the latest intake for Lifeline’s crisis supporters has doubled.

These impressive results are an important reason why the Rolfe Motor Group is fully committed to giving back to the community.

“We want to be seen as a good corporate citizen in the local community,” Mr Rolfe said.

“We see it’s essential that you give back whenever possible and the organisations we deal with share a philosophy that we are very happy to work with.”

Importantly, Mr Rolfe acknowledged that the partnerships also fostered new business opportunities and enabled “you to learn things that you can take on board yourself”.

“If our charity work assists people to put us on their [car] shopping list; then it’s a win, win for everyone,” he said.

Did you know Canberra has a new Peugeot dealership? The long-established Richard Rolfe Motors has added the European brand to its stable and we came to you LIVE from Rolfe Peugeot in Melrose Drive, where Richard Rolfe gave Tim Benson a first look at the sleek and elegant Peugeot 3008 SUV.

Kari James - 25 minutes ago
I would find this job incredibly difficult and stressful - great work to the team! View
Natalie Griffiths - 40 minutes ago
I spoke to them yesterday and they lady I spoke to was amazing and had a laugh with me. Well done to them all View
Suzanne Tunks - 51 minutes ago
Mark Scarborough well that should be fine but always wise to read up on it first or give the hotline a call 😊 View
Business 2

Penelope Rose - 28 minutes ago
No money means can't pay rent, mortgage, electricity, etc, no food. Homelessness isn't something anyone wants. Business peopl... View
Sher Bee - 4 hours ago
Temporary benefits for the fully vaccinated would be a nice step. As key percentages are reached the benefits can be expanded... View
Business 107

Joanne Foster - 2 hours ago
Lach Trev they sure would 😉 View
Lach Trev - 3 hours ago
Erin Louise Joanne Foster Jeremy Foster the kids would love this. View
Callam Sansom - 4 hours ago
No way will there be a expert line out there 😂 View
Opinion 25

@The_RiotACT @The_RiotACT
Dobinsons is on a roll and bringing their baked goodies to a street near you. Find you how you can get your fix to make lockdown a little sweeter https://t.co/z8IGWiEGyy (9 minutes ago)