Rolling Along in the Capital 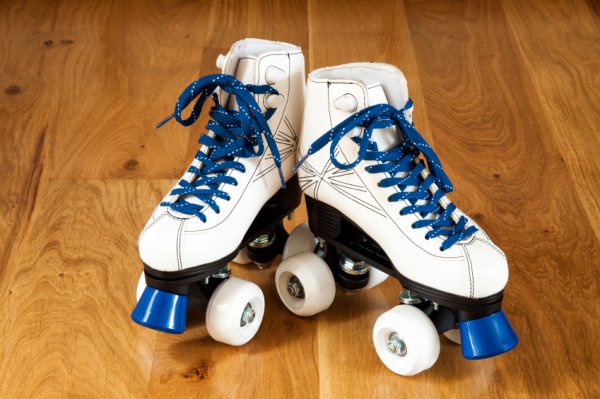 If you grew up in Canberra in the 90s like I did, chances are you went to the roller skating rink in Erindale at some point. Before I discovered horses I spent every Saturday morning at Skates Alive learning how to roller skate. We’d have an hour lesson which consisted of checking off certain skills in order to move up to the next level class and an hour of free skating in front of a giant screen which played such early 90s gems as Do the Bartman and Step By Step.

Sadly, Skates Alive was a casualty in the rise of the Super Nintendo craze; the rink went out of business and the site was sold to an evangelical church.

In recent years however, roller skating has become old enough to be cool again: most notably due to Roller Derby and its legion of hot, tattooed girls who knock each other over for fun. But that doesn’t mean it’s a No Boys Allowed Club, Varsity Derby League now have a men’s team full of hot, tattooed boys who knock each other over for fun. If you’ve got a kid who finds the idea of playing netball about as exciting as a soggy biscuit, Canberra Roller Derby League have recently begun a junior derby program.

Blood sports aside though, the re-emerging popularity of quad skating begs the question: where the hell can you learn to skate around here if turning up at the Skates Alive place means you’ll probably end up speaking in tongues? Well, you have a couple of options.

The guys at Adrenalin Boardsports have teamed up with some of the ladies at the Canberra Roller Derby League and opened up a rink in an old warehouse in Fyshwick. Skate Nation offers several sessions aimed at both newbies and experienced skaters. SkateSKILLS focuses on basic and advanced skating techniques and skills development for general recreational skating. SkateFIT adds push-ups, sit-ups and planks into the mix. They also do roller discos, and let’s be honest here; who doesn’t love a roller disco? The bonus is, you can hire skates for the session or even buy yourself a pair beforehand, given that Adrenalin’s storefront is also now in the same warehouse.

If the idea of skating in front of other people makes you dizzy though, there’s stacks of places where you can get your skates on and do your own thing. These are my favourites:

If you’re brave enough to dodge the cyclists who also use this track, it’s got a fantastic smooth asphalt surface and gentle inclines that aren’t too scary. The track is wide enough to accommodate different users without risking crashes. It’s great for newbies and more experienced people who want to get their endurance fitness up: the track is a roughly 1km loop. Enter off John Gorton Drive in Wright (roadworks have changed literally EVERYTHING around there, so just follow the signs.)

Located next to the Australian Catholic University, this court is quite smooth. I taught a friend to skate on this court and she didn’t die, so it must be ok. Watch for the occasional twig, twigs are jerks and like to trip you over. Enter through the hole in the fence off Higinbotham st outside school hours.

You need to pick your day and time for this one as the multi-purpose courts are popular with basketballers and soccer players, but the surface is a wonderfully smooth painted concrete, and it’s fenced in so you can’t accidentally roll off into the void. Park on Narden St.

Another nice painted concrete basketball court that’s brilliant for people who are still finding their skating mojo. You might want to avoid the duck poo, although ancient skating legends say that stacking into duck poo is good luck. Enter from Warwick St.

Providing they haven’t put up a fence around this school, there’s a small covered concrete area that is pretty tops for newbies. The bonus is that there is also a power point so you can plug in a stereo to play some tunes while you skate. Park on Kent St and walk down past the basketball courts.

The esplanade in front of Reconciliation Place is a great place for newbies who still wobble a bit, but who have enough control over themselves to not skate into the lake and risk mutation from the algae. Intermediate level skaters will enjoy the 5km circuit as fitness and endurance training. The ramps up and down from the Commonwealth Ave bridge can be tricky (I fell on my face on the way down), the Kings Ave bridge isn’t too bad though.

This is by no means an exhaustive list. Hit me up in the comments if you have your own favourite! Finally, if you want to meet like-minded locals, check out the Canberra Social Skating group on Facebook.

Niki van Buuren is a Canberra-based writer, teacher and former wannabe derby girl (retired due to injury, which isn’t really that surprising when you think about it).

i so want to learn how to skate . Is there a place there where one can learn ?

Lol, this is awesome! Thanks for the advice on how and where to pick up skating again. It is most useful, especially outside the realm of the blood sports (fun as they sound).

I remember skating at the rinks in Dickson way back in the late 70’s. Good fun. I prefer ice (skating not the drug!!) now though.

Brent Hutch - 7 hours ago
Simon Lynch I'd suggest you need to go check your own facts first champ. Based on your thinking, the ACT should ignore fires... View
rationalobserver - 22 hours ago
3 points; No sane person would raise the topic of Defence force help in the same breath as raising the possibility of a law s... View
Simon Lynch - 2 days ago
I'd check the facts first Kerry. At the time there was no fire in ACT and yet your wonderful Administration hired the helicop... View
Lifestyle 2

Capital Retro - 22 hours ago
Slowly but surely all cell-phone challenged reception areas in our region are being addressed. Last week the new Telstra 4Gx... View
Sport 20

PaulWalshe1 - 1 day ago
Great article Tim, it was a special day for AFL in Canberra. The ACT had only 3 VFL players - Jezza, Ian Low and Queanbeyan's... View
Business 20

Capital Retro - 1 day ago
I don't know who is going to read it then JC. I suppose the hardcore lefties and self-appointed experts who contribute almost... View
JC - 2 days ago
The paper is still going to be made. View
Rebecca Hosking - 2 days ago
Jane Larkin Naomi Feuerherdt Kim Beaumont This is a bit sad 😥 Remember our team photos on the massive reams of paper 😊... View
News 29

Canberrans will soon have another option to traverse the city with up to 1,500 dockless electric scooters being introduced under...
Opinion 37

It is reflective of just where the Canberra Liberals are on the election trail that it was Mark Parton's social...
News 32