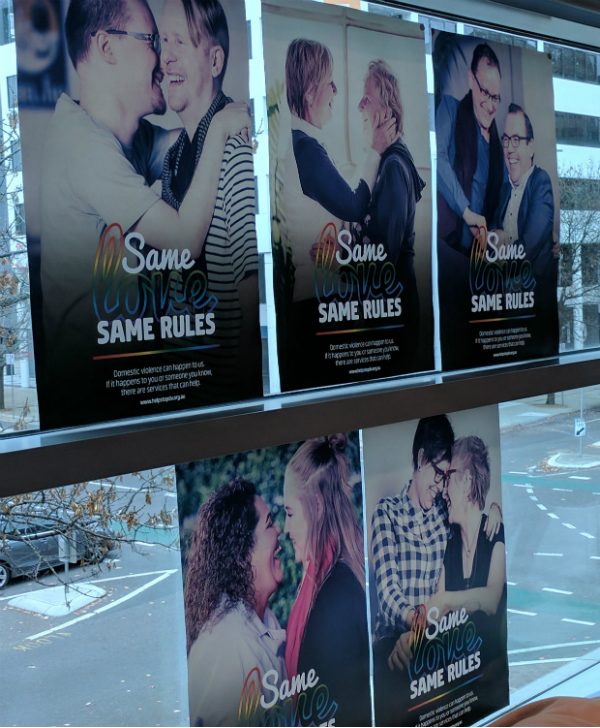 You may have seen these postcards and posters in cafes, bars, and offices around Canberra in recent weeks. Despite looking a little like a marriage equality campaign, these images are actually about domestic and family violence.

On Friday 19 May, two days after the International Day Against Homophobia, Transphobia, and Biphobia (aka IDAHOBIT, which includes recognition of the discrimination experienced by people who are intersex), the Women’s Centre for Health Matters launched their Same love, same rules campaign at the ACT Human Rights Commission.

The theme for IDAHOBIT 2017 was Love makes a family. But some people in the LGBTIQ community experience violence from intimate partners, or they may also experience violence from siblings, parents, or other family members. When this happens, it is important that they are able to access support and services to help them, just as people who are in heterosexual relationships, or who are cis-gender, are able to do.

In 2015, the Women’s Centre for Health Matters conducted research with people from the LGBTIQ community who had experienced domestic or family violence, or supported someone who had. Half of the participants said that they did not access domestic or family violence support services. Reasons included not wanting to disclose private information to family, friends, employers, or others in their lives, such as their gender identity or sexuality. Some respondents who had accessed services felt that it was better to remain silent about their gender identity or sexuality.

Jodie Griffiths-Cook, Children & Young People Commissioner and Public Advocate, said at the launch that domestic and family violence is especially isolating for people from marginalised communities, and recognised the importance of services understanding how to best support LGBTIQ people.

“Possibly the strongest finding in considering what would be useful was centred on ensuring an understanding that this issue existed within the LGBTIQ community. A recommendation from the report was for the development of LGBTIQ culturally appropriate resources and materials that raise awareness within the ACT community about domestic violence, what it looks like, and what they can do or where they can go to seek support.”

Working together to support the community

In response to the 2015 research, the Women’s Centre worked with A Gender Agenda, Domestic Violence Crisis Service, AIDS Action Council, Legal Aid and the ACT Lesbian, Gay, Bisexual, Transgender, Intersex and Queer (LGBTIQ) Ministerial Advisory Council to create the Same love, same rules campaign. The community wanted to see their relationships in a positive light, even for such a difficult topic.

Paper Monkey did the design work to make it “not a negative campaign that would stigmatise, but would encourage people to really think about it, and would show people that they knew in the community and would recognise,” Ms Williams said at the campaign launch.

The result is a series of posters and postcards to support positive, respectful, relationships free of violence, and help people affected by domestic and family violence find support. A local domestic violence information website includes information specifically for people in the LGBTIQ community. 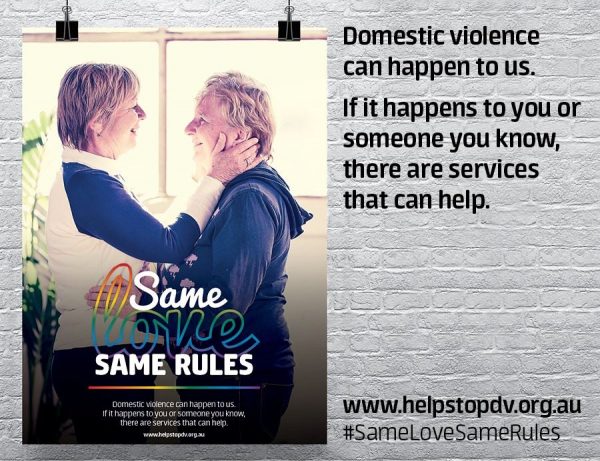 “These resources are fantastic. I’m personally really excited to be part of them,” said Veronica Wensing, who appears with her partner, Krishna Sadhana, on the posters. Including locally recognisable members of the LGBTIQ community such as Veronica and Krishna, as well as people of diverse ages and cultural backgrounds, means that the images are both inclusive and easily recognisable as being about local LGBTIQ issues.

“Being able to have some resources and refer to research, to reassure people that services can help, is great,” Ms Wensing said.

“I think one of the reasons why this hasn’t been a well publicised issue to date is that the LGBTIQ community has its own struggles… we struggle for validity and for legitimacy in our own relationships, we still don’t have equal marriage. So bursting the bubble and admitting that this stuff goes on in our relationship is a big risk for us. This means that the straight world looks in and goes ‘oh look they’re being violent to each other, how can we support their call for equal marriage’ so I think it’s a very brave thing to do.”

Ms Wensing also talked about work still to be done on domestic and family violence issues. “One of the conclusions that we came to was that we can have a set of resources for the LGB community, but they won’t necessarily apply to the TIQ community. So there remains some work to be done,” she said.

Helen Watchirs, ACT Human Rights Commissioner, also spoke at the campaign launch, recognising the human rights of LGBTIQ people and talking about other recent campaigns to make Canberra more inclusive, such as the Everyone Can Play campaign to increase sports participation by LGBTIQ people.

With the launch of the Same love, same rules campaign, we hope to support LGBTIQ people to have positive relationships that are free from violence, as all relationships should be.

If you are experiencing domestic or family violence, contact the Domestic Violence Crisis Service ACT on 6280 0900. In an emergency, always dial 000. 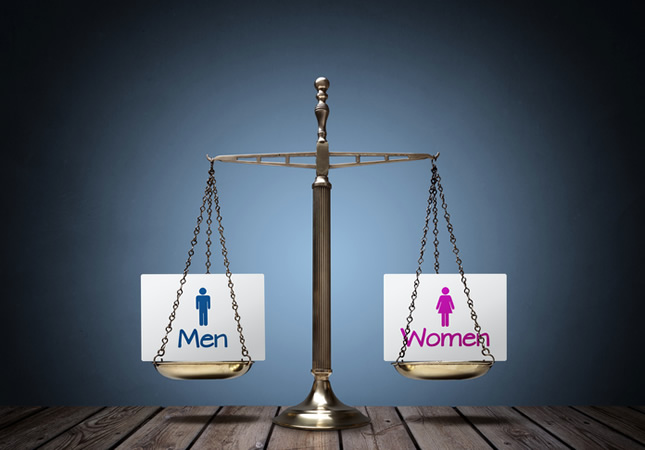 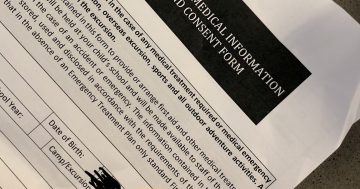 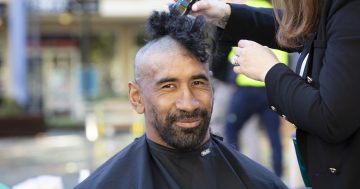