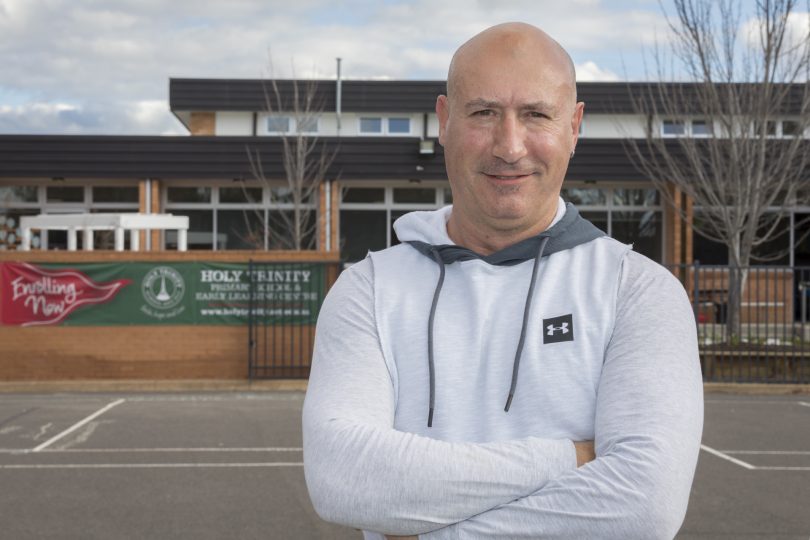 Parent Rob Chicco says the social aspect of sending his children back to school is a good move for their mental health. Photo: Michelle Kroll, Region Media.

All preschool, kindergarten, year one, two and seven students, and some year 11 and 12 students, have returned to public school campuses today as the ACT Government implements its gradual easing of COVID-19 lockdown restrictions.

Most Catholic school students returned to face-to-face learning from today, but others are planning a staged return to classes.

While it was a day of mixed emotions for most families, some were relieved that they were finally able to send their children back to school.

Rob Chicco, who along with his wife is an essential worker, had already sent his two children back last week in Curtin and was not concerned about on-campus learning as there are no active COVID-19 cases in the ACT.

“I do feel comfortable sending them back,” he said.

“The home-schooling was a bit difficult. The year six – the 11-year-old – was ok, she was competent on her own, [but] the year three needed a little bit of extra assistance.

“It is a relief for them, I think, mainly just for the social aspect. They needed the interaction more so than us as parents. The education I think we could waiver for a couple of months but it is more the social interaction for their mental health.”

Mother of three Melissa Caggiano was a little more concerned about sending two of her children back to school but conceded it was hard for parents to keep kids at home.

“I feel happy they are back at school because homeschooling and working at the same time is hard. But I am apprehensive with everything going on, I think it is a bit quick,” she said.

“Having the new pick-up system that they have in place makes it a lot harder but I understand because of the precautions that they need to take, so it is good in a way.” 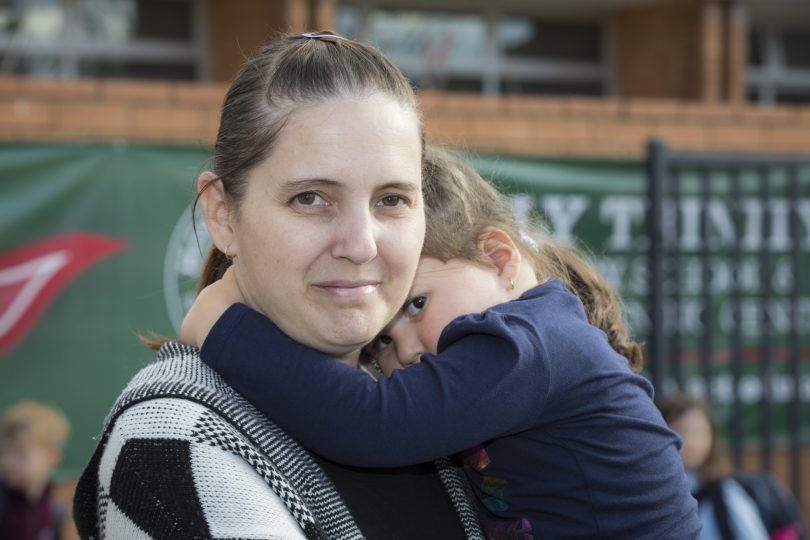 Mother of three Melissa Caggiano said she was a little apprehensive towards the idea of sending two of her children back to school so soon. Photo: Michelle Kroll, Region Media.

Cars were lined up down the street at Curtin’s two primary schools this afternoon. The new pick-up system at Holy Trinity had two drive-through sections depending on the number of children parents were picking up.

A similar principle is in place at the Southern Cross Early Childhood School in Scullin as parents have to drop their children off outside the gates.

But some were looking at the bright side.

“We are a school where we usually welcome families on-site, so it is unusual for us to ask families to drop-off at the gate, but we have had some really good things happen because of that,” principal Lyndall Read said.

One of the six-year-olds – grinning from ear to ear – lauded his newfound independence, excitedly telling Ms Read he felt like a teenager walking in alone.

“We are absolutely thrilled, really excited. Generally, our kids have made a really good start coming into school so we are really thrilled with how things have gone,” Ms Read said. 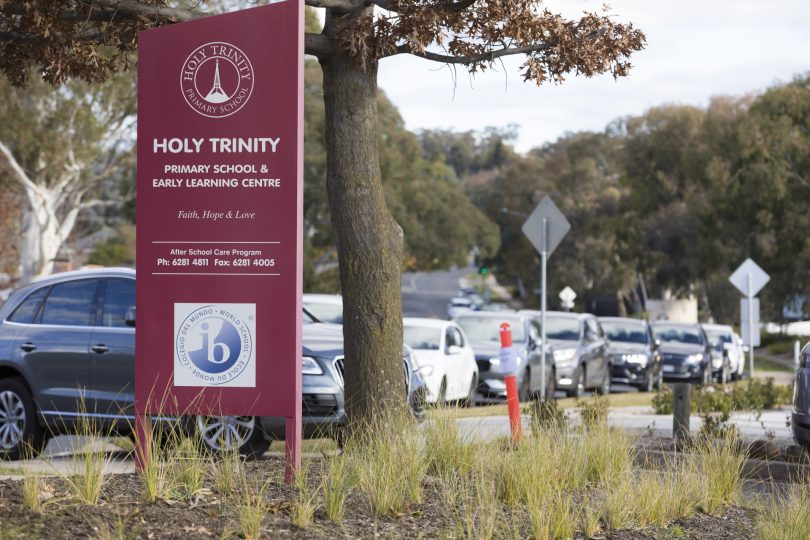 The line outside schools at Curtin stretched down the road as parents stayed in the car to maintain their distance. Photo: Michelle Kroll, Region Media.

The overwhelming majority of Southern Cross’s 220 students were back on-campus today, but a couple of students were still remaining at home.

“That is because either they, or a member of their family has a chronic condition, and of course we will support them,” Ms Read said.

Education Minister Yvette Berry acknowledged it was an anxious day for most parents, but she assured them that it was safe to have their kids back in the classroom.

“For some families it might be a bit of a nervous occasion as well, returning to school for P to two, and year 11 and 12,” she said.

“This is a situation where we are taking every day as it goes and paying attention to what happens across the country but in the ACT we have done everything we possibly can as a community.

“We have flattened the curve and suppressed the virus, so we are just being cautious and very planned in our approach,” Ms Berry said, although a return to digital learning is not completely off the table if the situation worsens and cases begin to spike again.

“We will have to consider it as we go. These things have been changing rapidly and so we have had to respond fast.

“We will take the Chief Health Officer’s advice, but also public sentiment as well. We need to make sure our community is comfortable with all of the activities that the ACT Government makes.” 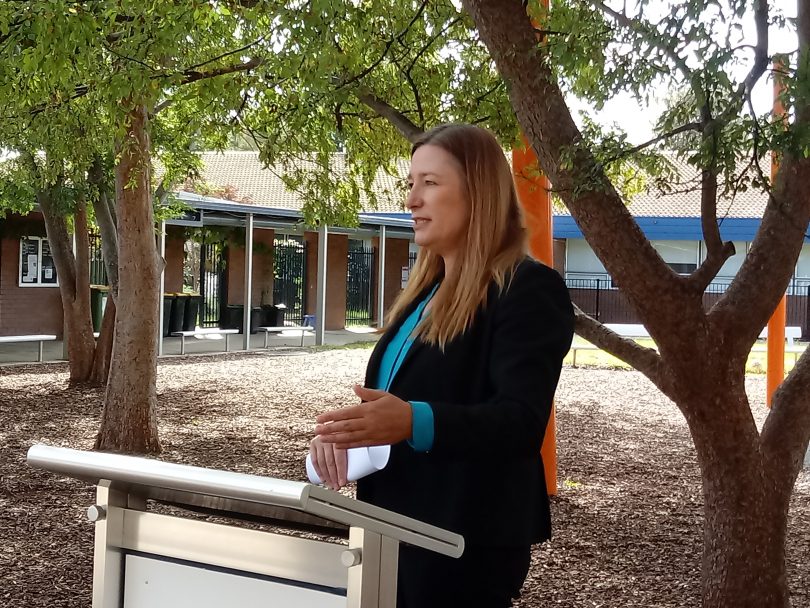 Education Minister Yvette Berry has thanked teachers for their tireless work to adapt classes during the pandemic. Photo: Region Media.

Ms Berry also thanked all the teachers and staff who had worked tirelessly throughout the pandemic to adapt curriculums to digital learning formats.

“Of course teachers have been working incredibly hard to make sure that as families return to their schools it is a smooth transition from what has been a particularly difficult time for everybody,” she said.

“But teachers have never stopped working through this period.”

All year three, four and 10 students will return to their usual schools on Monday, 25 May (week five) and all students in years five, six, eight and nine will be back on campus from Tuesday, 2 June (week six).

Andras Keszei - 1 minute ago
Because what we lack in Australia is space? View
Ash Manwaring - 6 minutes ago
I want a yard so I can have animals 🤷🏼‍♀️ View
chewy14 - 13 minutes ago
How is densification a Socialist ideal? It would actually seem that the opposite is true in the urban sprawl utopia you're ta... View
Food & Wine 15

ACT resident - 1 hour ago
Is this more spin from the lessee? ALDI at Fyshwick did not proceed because there are very stringent rules in the ACT regardi... View
Public Sector 3

Kevin Hodder - 11 hours ago
Rent, rates, stamp duty, taxes, work cover compliance ect and every thing else the act gov stings you! just so you can open t... View
Acton - 13 hours ago
Another stunning achievement for the incompetent Greens/Labor ACT government. Along with the highest rates increases, the lon... View
Property 6

Matthew Beale - 11 hours ago
Sarah Young sadly it comes down to being able to buy in only very outer suburbs, if you have a deposit. It is a seller's mark... View
Sarah Young - 12 hours ago
Robert Chisholm it’s crazy, I think they should do a 1 house rule at the moment, I read something last week about buying an... View
Robert Chisholm - 14 hours ago
Are the ones winning the auctions developers, property portfolio holders using the equity on their other properties or what.... View
What's On 1

The world's first plumbing systems emerged around 800 years BC. Created by the Romans, aqueducts and pipes supplied water across...
Opinion 74

Back to school: Government announces staged return for students

@The_RiotACT @The_RiotACT
As the art world begins to rear its head again after COVID-19, exhibitions are back on. Catch Belco Arts' latest exhibition featuring two young artists https://t.co/j5T4N9j2Qj (13 hours ago)