After full house shows for the last three years, the New York-based Shen Yun Performing Arts is coming back to Canberra, this time with a live orchestra and an all new programme on 21-23 May 2010. The company was previously called Divine Performing Arts.

Spectacular visuals take you to another world, with blossoming landscapes and celestial palaces appearing on beautiful animated backdrops. Groundbreaking music seamlessly combines the best of the East and West, giving each dance an unmistakable flair.

Ancient legends of virtue and modern tales of courage are brought to life by over a dozen dances and songs, making for one extraordinary, uplifting, and unforgettable experience.

Shen Yun Performing Arts brings together over a hundred of the world’s foremost classically trained dancers, choreographers, and musicians. Based in New York, Shen Yun is independent of China’s political regime and proud to include artists who practice the Falun Gong meditation. It seeks to revive and breathe new life into traditional Chinese culture while providing an experience of sublime beauty.

RiotACT has 3 double passes to give away to this spectacular, for your chance to win in 25 words or less tell us why you should win and what’s makes you better….!

Or you can buy tickets at http://www.canberratheatrecentre.com.au/what-is-on/event-details.aspx?eventID=2691 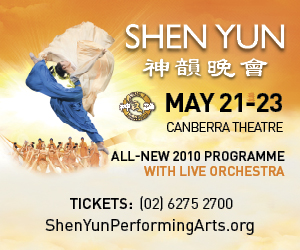 Any word on the winners yet?

i’d like to win these tickets because: I accidently put my hand though a blender while making soup. After waiting over 27 hours @ Canberra Hospital, I deserve some entertainment & pain relief!

If my children attended Shen Yun
They would most certainly swoon.
And I could be clever
(or my name’s not trevar)
And introduce them to a new tune.

I would love to go, it’s my birthday on Saturday the 22nd. It would be such a great present for me! I’ve wanted to see this for ages:)

If my littlest girl
could see Shen Yun twirl
She’d forget about learning ballet
and I could sleep in on a Sat’day!

I love Chinese food, and seeing the people who are skilled enough to make that food dance would be great. Especially if they use chilli.

Hy georgesgenitals, I hadn’t realised they were going to make the food dance. Even more reason to go! And food fight? Will there be a food fight?

I love Chinese food, and seeing the people who are skilled enough to make that food dance would be great. Especially if they use chilli.

I’d love to take my mother for her 60th birthday: my brother moved to China a while ago and this would remind her of him.

These guys are spectacular, I have a DVD of one of their shows and I highly recommend that if you can afford it, it’s worth every cent to go and see.

I’d like to win the tickets because: My father-in-law has diabetes and is going blind. I’d like him to see this while he still can. Not a sympathy thing, just the truth.

Otherwise I’ll just take the DVD and some popcorn around so the inlaws can see it!

Isn’t Shen Yun a front for Falun Gong? Can’t wait for the Scientologists to get into theatrical productions. It’s Battlefield Earth: The Musical!

MsCheeky’s grown-up boy lives in China. On Mother’s Day, I wore my Mao t’shirt and hat and drank Tsingtao beer to feel the love from afar.

Damn, 26 words. Best I could do, though perhaps ‘beer’ was redundant to the cognoscenti.

Ashley Latimer - 23 minutes ago
Jay Annabel yes we have a smaller number of deaths from covid because we locked down. Why did we lock down? Because it's more... View
Jay Annabel - 29 minutes ago
Ashley Latimer Compare the fact that almost 1000 people died of the flu in 2019 and we didn't care (and you probably would ne... View
Ashley Latimer - 34 minutes ago
Are you trying to imply that a covid-19 vaccine somehow has the same efficacy as a fully developed influenza vaccine which ha... View
Community 5

Capital Retro - 59 minutes ago
I recently discovered some old papers belonging to my late father. Among them was an "Identity Card" Form C.R.3 which was iss... View
Hans Dimpel - 4 hours ago
Tod Davis which rules and who is speaking them? Are you sure you aren't being influenced by rightwing conspiracy pages with a... View
Hans Dimpel - 4 hours ago
a world full of rainbows and unicorns would be good. sounds nice.... View
Community 9

Phil Tarrant - 1 hour ago
I remember similar ones from when I was a kid in the seventies, they were sometimes out in paddocks and I saw one that was br... View
bikhet - 2 hours ago
This seems to be your thing. Never knew the pluviometers were there. Is their output available on the web somewhere? I'm a bi... View
brendan eyers - 3 hours ago
Cool to know what the cubes are, though I've never noticed one. Worth a mention that there are a hundred or so pluviometers a... View
Property 2

simm - 1 hour ago
PLANNING the main entrance on Canberra Avenue is a sensible and practical choice . Franklin street Cafe/Retail strip already... View
abdul mutawe - 2 hours ago
Having performed building works for Mrs Liangis over past decades, I have to say she is very astute, capable and fair. And sh... View
News 124

chewy14 - 2 hours ago
"A responsible and competent government would" Well there's your first problem. They haven't been forthcoming with robust bus... View
michael quirk - 4 hours ago
The government has yet to provide evidence to justify the light rail extension, the viability of which is tenuous given incre... View
Community 2

Generation Next empowered to create at Dance Fest