Should we leave the big poo to Robertson? 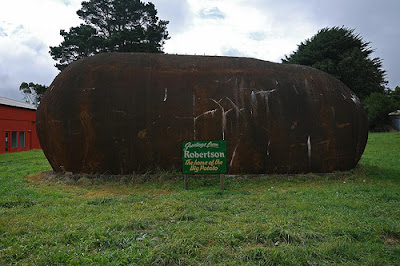 Those who have trekked the Illawarra Highway will almost certainly be aware that Robertson is home to mists, and a big poo.

The poo bears a sign claiming it is a potato.

They’re rather proud of their poo in Robertson. 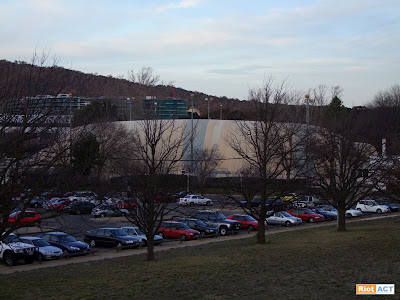 Here in Canberra the Civic pool was some years ago enclosed in a giant dome at the command of the No Self-Government Party MLA Craig Duby. Political cognoscenti still refer to it as the “Dubydome”.

According to Wikipedia Senator Gary Humphries once said of it:

The words of some great sage spring to mind: “Things that men do live after them”. I am afraid that there is very little else in the Territory that will live after Mr Duby, so to do away with his one remaining monument in the Territory would be a great pity, Mr Speaker.

But as you’ll note the Dubydome has taken on a distinct brown hue these days.

If this is not corrected it will surely strip from Robertson the prize of playing host to the biggest poo in all of Australia.

How do we feel about this?

UPDATED: Thanks to our reader abc for informing us that the gubbmint is already on to this and the poo will be coming down shortly. Citizens of Robertson rejoice. Will there be a statue of Craig Duby erected in memory of this momentous chapter of history?

12 Responses to Should we leave the big poo to Robertson?
Filter
Showing only Website comments

they used to only put the dome up in the winter, and then take it down over summer from memory…

but yes, it looks awful now!

Perhaps they could build a commemorative public toilet as a monument to Duby.

The pool was fantastic!

Lying under the shady trees on a summer day with your friends, having to hold hands with the boys because you were too scared to jump off the tower ….

Great photo of how Civic Pool use to be… on page 6 of the good collection.. credit to Flickr..

I think it ruined the place too.

All local pools seem to be shutting down for maintenance at the moment. Civic pool is super grotty looking these days though – i ho[pe they can fix it up.

I can remember the civic pool before the dome. It used to be like Dickson pool, but better because it had the 5/10m platform. I’ve been once since it went up – in my opinion it ruined the place.

Queanbeyan also has a very good Big Poo. It’s the concrete building that is the entrance to the municipal swimming pool.

Civic Pool shuts this Friday….. Dome is coming down to make way for some sleek new looking thing that has sides that open.

Damn I read that as ‘sleek new looking thing that has SLIDES that open’.

I got really excited for a second.

Leave it, as it is a spectacular monument to one of the major failings of ACT self government, that is, the pandering to pet projects by those who have the power to approve it.

Civic Pool shuts this Friday….. Dome is coming down to make way for some sleek new looking thing that has sides that open.

Hmm, biggest poo where said pooer ate something white and blueish for lunch?

On the whole its value is duby-ous.

Alison Brittliff - 15 seconds ago
Yes and no, in a day to day bau I’d say yes, but when adversity or tragedy befalls one of our own we show our heart and com... View
Luela Paco - 2 hours ago
Canberran life is peaceful and balanced. Love the ambiance and the people. Love my life in Canberra. View
Matthew Soall - 4 hours ago
Janet Ilchef To the point of disaster. View
News 10

Antony Burnham - 13 minutes ago
surely they are to be contrasted with passive transport trips, i.e. falling asleep on the bus and missing your stop View
Craig McPherson - 8 hours ago
Tristan Melhuish oh yes, and hey I get this language from government - bureaucracy at its finest - but from a journalist - su... View
Tristan Melhuish - 8 hours ago
Craig McPherson or signalising an intersection when they are installing traffic lights? 😂 View
Opinion 42

Eileen Dempsey - 1 hour ago
Lovely photo Barbara 💕 View
The RiotACT - 6 hours ago
Judith Winter Hi Judith, if you head to their Facebook page tagged in the caption you will be able to contact the Red Hatters... View
Judith Winter - 6 hours ago
How do you become a Red Hatter in Canberra? View
News 7

Don Rail - 1 hour ago
ACT????? View
Jason Ezra - 1 hour ago
Lobby your elected representatives to change the law to bring the requirements into line with every other jurisdiction. View
Kriso Hadskini - 5 hours ago
Judges 4chan fans? View
Community 7

Greer Brennan - 3 hours ago
Ohhh some more food for thought View
Maria Greene - 5 hours ago
We went to one in Melbourne and the food was terrible and service weird. They may have difficulty getting staff during covid View
Carmel McDonell - 6 hours ago
Thai Herb -second that!!! View
Opinion 204

Alan Sargeant - 13 hours ago
Celebrate it on 1 January, it means one less Public Holiday for all. View
show more show less
*Results are based on activity within last 7 days

Thai is one of my favourite cuisines to cook and eat. Fresh humble ingredients perfectly balanced to achieve harmony between...
Breaking 0

It's the week before the national holiday that causes division across the country, so it wouldn't be right for me...
Opinion 68

Although Summernats was cancelled this year due to COVID-19, streetcars continued to make the news. ACT Policing worked closely with...
Opinion 42

Vaccine rollouts will begin in a month after the Pfizer COVID-19 vaccine was provisionally approved for use in Australia by the Therapeutic...
Opinion 60

Whenever a story about cycling appears, it activates an avalanche of pent up angst from the wider community. Predominantly it’s...
News 26

@The_RiotACT @The_RiotACT
January is wrapping up, but there’s still plenty to see and do in Canberra over the coming week https://t.co/yDyCfOctiv (2 hours ago)

@The_RiotACT @The_RiotACT
Geocon has given ground but the YMCA will still oppose a 14-storey development next door to its Gungahlin childcare centre https://t.co/AfdmfRnk2z (4 hours ago)