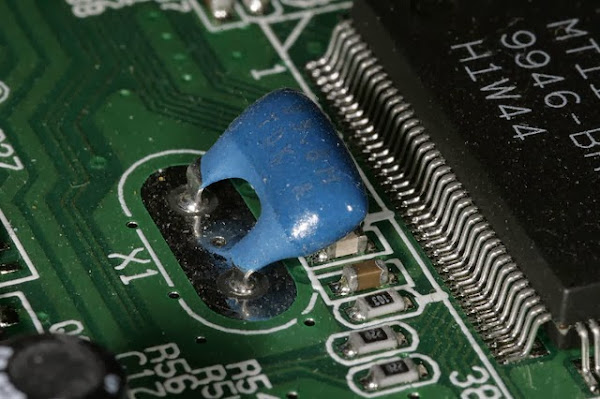 ANU has announced a major advance in the world of electronics coming out of Acton:

The Single Layer Capacitor (SLC) is a small conductor of energy inside electronic devices. Its main benefit is its thermo stability: it doesn’t heat up as much as standard Multi-Layer Capacitors.

One of the project’s key architects, the Research School of Chemistry’s Dr Yun Liu says the SLC is a breakthrough for the electronics world.

“You don’t have any electrical fatigue caused by internal electrodes,” she says.

“And also our material has temperature stability, and a lower energy loss, which makes this single layer capacitor very competitive.

“It’s also very easy to make. It’s pretty much made of ceramics and you put in electrodes. It’s very convenient, so it’s a simple process.”

Neil Radford, from the University’s Technology Transfer Office, is in the process of pitching the School’s product to as many companies as he can, including a world-leading manufacturer of ceramic capacitors.

Radford says if the SLC gains further backing, they could effectively tap into a market worth billions of dollars.

“We’ve got the lab results, we’ve done very low-level testing and that’s pretty much been successful across the board. We now need to extend that testing, and incorporate the material into a real-world application.”

I prefer free range capacitors myself.

That blue thing in the pic is not a capacitor – it’s a resonator. The little rectangular lumps behind it are caps tho.

Julie Macklin - 6 hours ago
Fortunately the long grass looks prettily scenic, until they do get to mow it. View
Tom McDonald - 6 hours ago
Correct. Same complaints year after year. View
Nathan Horton - 7 hours ago
Julie Macklin they have known for 3 months it is going to be a wet spring and summer. Yet chose not to be proactive and prepa... View
Community 4

ssek - 15 hours ago
Give it time and the greens will have all kinds of legislation around halloween to prevent children having fun. View
News 1

ssek - 15 hours ago
These marine parks are ridiculous. Stopping a few people with a rod and fishing line from catching a couple of fish does not... View
Opinion 5

Capital Retro - 16 hours ago
I don't agree with a few of your claims. I am a senior person and at no time in my life have I ever heard of house ownership... View
Motoring 10

oh_ - 16 hours ago
As much as the noise, disruption and burnout smoke is trying for nearby residents, it does bring money and something differen... View
Rob Thomas - 1 day ago
Floriade? View
Tim White - 1 day ago
David Perkins you do know that it created jobs and brought millions into our local economy and in some cases kept many small... View
News 7

Chris Hobbs - 18 hours ago
Will ACT residents benefit from 30% canopy cover by 2045 from a massive tree investment, yes! Will we need to remove some old... View
Alice Paris - 19 hours ago
I dont think you understand what is happening here Chris. The Greens and Labor are responsible for the removal of so many mat... View
Bill Gemmell - 19 hours ago
Alice Paris I think people need to talk to their MLAs and let them know how the feel about various issues. I certainly will b... View
Food & Wine 32

@The_RiotACT @The_RiotACT
The election's over and it's time for some fun. Our poll this week asks if we should celebrate Halloween or if it's commercialised nonsense https://t.co/JvbB9hOhZp (7 hours ago)

@The_RiotACT @The_RiotACT
There's plenty happening in Canberra over the coming week. Here are ten great things to do in the next seven days https://t.co/u9dwGfwghO (8 hours ago)