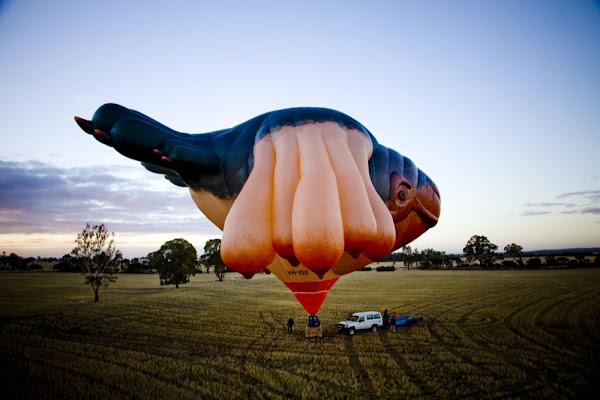 Canberra’s kindest and most good looking citizen, the mighty Skywhale, is readying herself for her spring series of events.

Despite criticism from a series of culturally bankrupt and joyless haters, the Skywhale continues her noble mission to promote Canberra to, and protect Canberra from, the rest of the world.

Shine on you beautiful flying mammal.

The Executive Director of the Centenary of Canberra, Jeremy Lasek, said that eight tethers or flights had been confirmed for The Skywhale following its first springtime appearance – a daytime tether at the University of Canberra’s Open Day on Saturday 31 August.

“The Skywhale will fly over the national capital on Saturday 7 September, weather permitting,” Mr Lasek said.

“There is continued strong interest in this unique artwork, demonstrated by extensive media coverage here and overseas and the high bids for a flight for two in the Centenary’s recent online charity auction.

“The auction closed on Thursday, with the flight for two selling for $1,565.”

Mr Lasek said that the 7 September flight will be the first over Canberra since May. As for all The Skywhale’s flights and tethers, people should monitor the Centenary’s Facebook page and Twitter feed for updates on locations and flight times.

The following Saturday (September 14) The Skywhale will have a tether at the Gunning Fireworks Festival from 4pm – coming down by 6.30pm when the fireworks begin.

On Saturday 21 September The Skywhale will be tethered near the Ainslie Arts Centre for the 2013 Bloom Festival , which celebrates the arrival of spring with a carnival of inner-city arts activities.

The following Friday (27 September) The Skywhale will have a night tether (called a nightglow) as part of Floriade’s Nightfest. This appearance is near the Regatta Point entrance to Nightfest but outside the ticketed area, making the event accessible to all.

In the event of bad weather the nightglow will be moved to the following evening.

There will be another appearance of The Skywhale at Floriade on Saturday 12 October, a day tether near Stage 88 (or Sunday 13 October in case of bad weather).

At Skywhale tethers, and weather permitting, it will be possible for members of the public to have tethered flights in the balloon in return for a donation to the Centenary charity Dollars for Dili.

“After that The Skywhale will appear at the Eden Whale Watching Festival on 2 November and at the Australian Centre for Contemporary Art In Melbourne in the week starting 25 November,” he said.

For more information on Centenary of Canberra events, visit www.canberra100.com.au

I personally think it is seriously ugly – mammary overload – in a balloon!!
Does it represent Canberra?? Impossible! Not even as a metaphor for the progressive, advanced, intelligent society we are – or even, as evidenced by this, the opposite.
To me, a bit of a waste of money, but not one iota of the waste of our inefficient ACT public service. Just another cost as a ratepayer in the ACT that I have to bear, along with public art, special bike paths that close half the road, Australia’s leading solar farms, all of the good taxpayer funded stuff that makes me feel clean, green and at one with the world. Just wished my garbage collection didn’t cost me $2500 per year. Sigh.

Should that not read:

Ah well maybe they could shower Canberra with milk instead..

Or just have a cold shower…

Ah well maybe they could shower Canberra with milk instead..

It’s sufficient that Canberra is responsible for the creation of a beautiful artwork. That’s a connection.

No Canberra connection, but I still love it.

Dot Thompson - 48 minutes ago
Hannah Tracey, is this for or you and Tom? View
Jessica Adams - 3 hours ago
Chichi Rojasrivaplata Winikerei I mean if we can afford this place I’m sure we can afford some help 😂 View
Chichi Rojasrivaplata Winikerei - 4 hours ago
Jessica Adams does it come with a maid 🤣🤣🤣 man I ain't got time to clean that 🤣🤣 View
News 54

John Vallance - 13 hours ago
Lucas Anasdow um.... because like all vaccines it goes through testing. once testing and trials and results are reviewed then... View
News 2

Brent Carlisle - 15 hours ago
I was shearing in the 1980’s and we where talking about how bad the conditions where then and nothing has really changed. View
James Tartarus-Gibson - 16 hours ago
Patrick Honeysett you and I will get a kick out of this 🤣 View
Property 15

Chris Vlahos - 16 hours ago
Should be built alot further back from the monaro highway for future road lanes and traffic expansion if need be. Esp with th... View
show more show less
*Results are based on activity within last 7 days

It's the week before the national holiday that causes division across the country, so it wouldn't be right for me...
News 54

@The_RiotACT @The_RiotACT
Robert Johnson has marked an incredible milestone - 750 blood donations. Here's why he makes the seven-hour trip from Bermagui to the ACT to donate https://t.co/IgcigUwwps (19 minutes ago)

@The_RiotACT @The_RiotACT
The COVID-19 vaccine rollout will be a focus of the ACT Budget this year, which is expected to be around $900 million in the red for 2020-21 https://t.co/czVFKo6XAx (2 hours ago)

@The_RiotACT @The_RiotACT
As the region marks one year since the Orroral Valley fire began, ESA boss Georgeina Whelan says Defence still has some questions to answer https://t.co/yirx3OfKTM (3 hours ago)