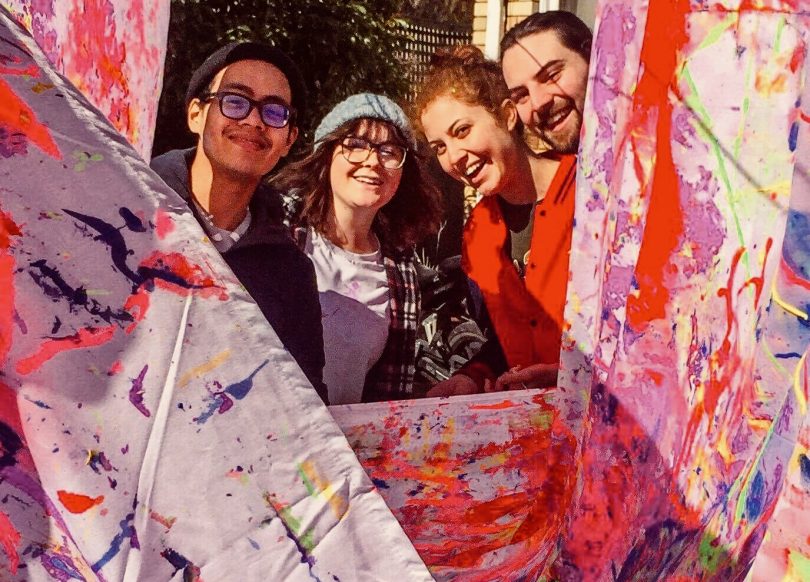 Slagatha Christie first came up on people’s radars in early-2017 and in just over a year and a half have made their way to the forefront Canberra’s female-fronted, hard rock scene. Beginning their life as a three piece, the band added a second guitarist earlier this year, that guitarist being Canberra indie-emo royalty Azim Zain (Azim Zain And His Lovely Bones), and they’ve never sounded better. Spending most of their time playing shows at home and interstate as well as writing and recording, Slagatha Christie have proven themselves to be one of Canberra’s hardest working bands.

Thomas The Skank Engine is the Slags first EP and neatly encompasses everything we’ve come to know, love and expect from the quartet. The record sits very nicely between being polished and raw as it still maintains the DIY ethos the band has become well known for. Vocalist/guitarist Kate Lawrence leads us through six tracks that explore a number of pertinent topics of today, including gender equality in the music industry, the toll social media has exacted from society and the eternal struggle of liking oneself.

Adding Zain to the band as a second guitarist is one of the best moves the Slags have made. This is not to say that Lawrence’s guitar-work is lacking in any way, but with Zain in the band it creates more opportunity for space and textures for both guitarists to explore. The space created by the two guitarists also give bass player, Jess High, the chance to shine as she should. Serving as the anchor for all six tracks, High knows when to play subtly and when to play heavy handed. Like most punk drummers, Stephen Watson’s strength comes from perseverance in the face of high tempos but also from his ability to breakdown a song with unexpected and fresh drum strokes.

Thomas The Skank Engines opens with “Boys’ Club” and this track displays everything Slagatha Christie have been about since their inception. Complete with a killer riff, scathing lyrics and a juxtaposition between melody and aggression, the track’s structure is effortless. Lawrence’s voice moves between sweet and sour as she condemns the, “Sad little boys’ club” of the music industry. The most interesting aspect of the track is the transition between the loud verse to the soft chorus, one not seen too often in rock music these days. Zaim’s main off-beat, descending guitar riff serves as the perfect breakdown for the track as Watson’s drums slide in to this part perfectly. Layered vocals take the song out and the listener has been well-initiated into the world of the Slags.

“Angry Reacts Only” is the second track on the EP and arguably the most accomplished. This track belongs to High as her chunky yet slinky bass riff drives the band into oblivion. Lawrence growls about the pointlessness of social media obsession with a seductive venom that, combined with High’s backup vocals, creates quite a powerful performance. Although at times it might seem the chorus has too many syllables packed into it, the Slags seem to make it work and it is the second half of “Angry Reacts Only” that really sees the band take it all. The breakdown is once again driven by High’s, “take no prisoners,” bass playing as Lawrence softly comes in with one of her best lines, “Choo-choo motherfuckers it’s a free ride coming to an end/ and if you need help I’m sure you can ask one of your thousand friends.” As Lawrence and High hold down the fort Watson and Zain build the track up to explosion with seething guitar and manic drums.

Thomas The Skank Engine then takes a quieter turn with “Seinfeels”, balancing tongue-in-cheek with a serious message in true punk fashion. While impressive melodically and fairly catchy, this track is not so much of a standout as the ensuing one, “Dinosaurs”. Back again with an ominous bass line from High, the guitars quickly come in with a screaming riff and angry vocals from Lawrence. The chorus sees her, once again, moving from painful growl to soft melody on the turn of a dime.

Whereas punk was once characterised by a lack of ability to play instruments supplemented by passion, it’s reached a point now where it no longer only appeals to the musically challenged. The Slags prove time and time again their first EP that they know their instruments, they know them well and they have the passion to go with it. The group’s musical diversity is proven best at the little piano outro to “Dinosaurs” and fan-favourite single, “Lionel.”. The latter displays the Slags knack for incorporating melody into their music without sacrificing aggression. EP closer, “Retail Rascals”, shows the group’s sense of humour with a one-minute ode to the pitfalls of working in retail but with a funky riff that could be one of their best.

Thomas The Skank Engine serves to show the world what Slagatha Christie are all about and gives insight into the talent they possess but don’t necessarily let on. If one looks into the dark corners and crevices of this EP I think they’d find the answers to Slagatha Christie’s future as they hold their cards close to their chests. The Slags aren’t reinventing the wheel on this one but they don’t have to. This is their first chapter in a new book of Australian rock ’n’ roll that is standing up to the injustices of 21st century Australia and it will become, as well as, remain important.