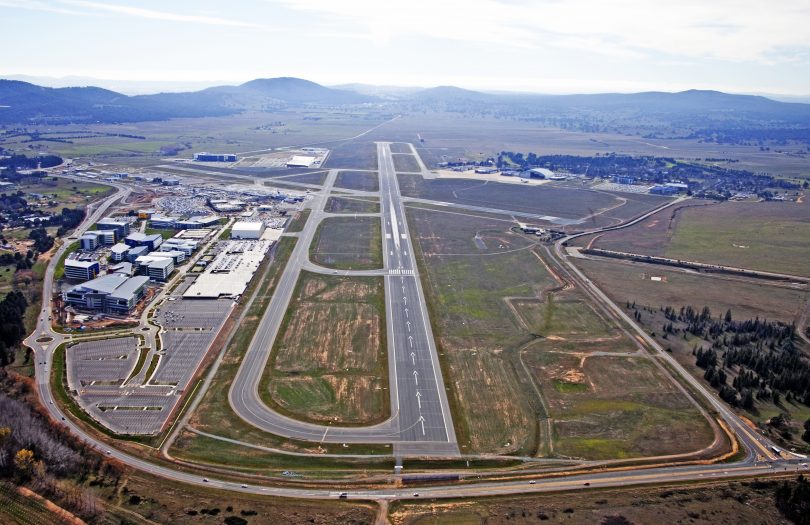 Canberra Airport says it has shut down the cross runway used by small aircraft as part of its cost-saving measures. Photo: File.

Canberra Airport has rejected claims it is using the cover of the COVID-19 emergency to shut down a runway used mainly by small aircraft operators as part of its long-term development ambitions.

The Aircraft Owners and Pilots Association fears the Airport’s decision to close the so-called ‘cross runway’ last week will jeopardise safety and eventually unlock land either side of the main runway for potential development.

The airport insists the closure is temporary, due to the coronavirus induced fall-off in aviation generally, but the Association remains sceptical, seeing it as a pattern of behaviour across Australia’s privatised airports where commercial development has flourished.

“They are trying to pull off something they would never have gotten away with had this whole disaster not happened,” AOPA President Benjamin Morgan said.

“They want to get rid of this cross runway because by removing the cross runway it will open up a parcel of land that is worth hundreds of millions of dollars for commercial development.”

The airport did not address these claims about its development ambitions specifically, but said the runway closure was part of a range of cost-saving cuts to services in response to the collapse in air traffic, including all international and 95 per cent of domestic flights.

It said the temporary closure would also allow minor maintenance work to be conducted, and had nothing to do with planning at the airport.

”The main runway is designed to accommodate small aircraft all the way up to large international aircraft,” the airport said.

“It is the safest and most efficient option for general aviation planes who may fly at this time. Emergency service aircraft and essential government aircraft have taken this temporary change in their stride and continue to operate out of Canberra Airport.” 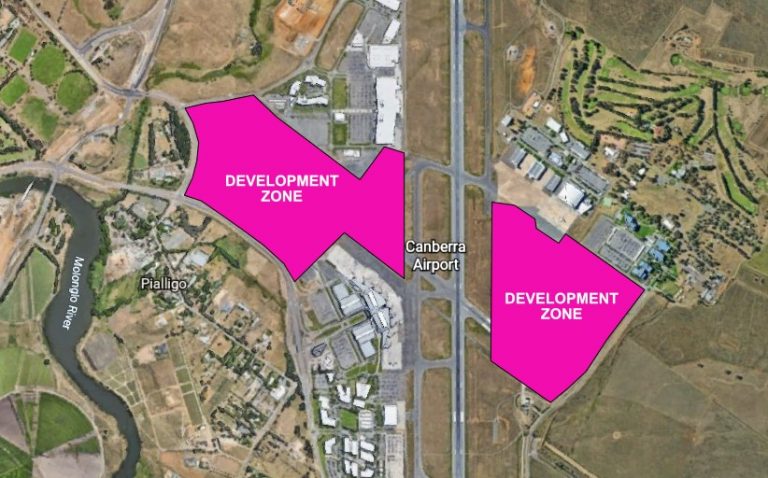 A graphic on AOPA’s website showing what it says are potential development zones at Canberra Airport if the cross runway was closed permanently. Image: Aircraft Owners and Pilots Association.

In a letter to aviation community members, Head of Aviation Michael Thompson said: ”The decision to close Runway 12/30 was not made lightly but reflects the significant fall in aircraft movements at Canberra Airport and these challenging times.”

But Mr Morgan said closing the runway degraded safety as any small aircraft still flying would be at the mercy of the weather and crosswinds on the main runway.

”The cross runway is not there for the airliners, it’s there for the smaller general aviation industry – the small charter operators, twin engines and small freight,” he said.

Mr Morgan said pilots could still set down on the cross runway in an emergency but the Airport will charge them for doing so.

He accused the Airport of wanting to see the back of general aviation so it could focus on the airlines and developing land around the airport.

“If they close that runway you’re going to see a massive development take place at Canberra, building more structures closer and closer to the runway,” Mr Morgan said.

He said the new terminal and other developments close to the runway had already created turbulence issues for pilots, and structures crowding the runway left them with nowhere to go in an emergency.

”Airlines are not the entire industry,” Mr Morgan said.

Thousands of small operators fly all over the country, bringing passengers to regional and metropolitan centres like Canberra to do business, he said.

”The country needs general aviation to keep going,” he said.

The airport said other temporary measures to ensure it could return to business as usual when the threat of the pandemic had abated included the closure of the western concourse of the terminal, reduced staff levels, closing the dedicated goods screening point, operating only one food and drink outlet, and cancelling this year’s Open Day.

Virgin and Qantas have closed their lounges, hire car operators are operating on reduced hours and staff, there are limited taxis servicing the terminal, and the flight tower is reducing hours and staffing levels.

Mr Morgan said the Association had contacted the office of Deputy Prime Minister Michael McCormack – who is also Infrastructure, Transport and Regional Development Minister – and lobbied senators to establish an inquiry into the situation.

Maybe someone will build a GA airport in Queanbeyan? Would be a great investment in the community I think. The air schools, clubs and charter outfits can move, and it might even generate attention from the airlines who are just sick of Mr Snow.

This is very unsettling. Our alleged international airport is already crammed onto a postage stamp (just look at that picture above) by dint of outrageous developments that should never have been allowed when the airport was sold (which it shouldn’t have been anyway). I say build a completely new airport, somewhere in New South Wales, that’s laid out on an appropriately large scale, has ample room for growth (parallel runways etc.), is protected from any future encroaching commercial development, and ensures the highest degree of safety for arriving and departing aircraft. The thing called CBR is an abomination that should be abandoned and then he can build all the development he likes on it.

as someone who lives under the cross runway .... there does not seem to be a decrease in traffic...

The airport corporation makes money out of parking cars and commercial airlines, not the hangover of small aircraft.

Well I guess they should Stay at Home!!

Nick Anderson too late, it's also owned by a millionaire.

Time for a second airport for small aircraft.

Tim Overall perhaps qprc could take on a new business.

Darcy Ryan There was a plan for one down at Williamsdale but nothing seem to come of it unfortunately.

Could have told you this sort of thing would happen when it was sold 20yrs ago. Privatisation at its best.

Dave N Ange Greer - 2 hours ago
Why is there no comparable list of Queanbeyan region sports stars....? Also how many James Bonds have come from Wagga 🤣 View
Dong Wong - 2 hours ago
look at the face on the dog hahaha View
Alan Byrne - 3 hours ago
Keni Kawaleva all day bra View
News 222

Jak Kanard - 5 hours ago
...it’s been the end of the line since it was first established ! Canberra has never been considered a rail destination - e... View
Property 3