A drone delivery service could grow retail sales in the ACT by $30-40 million by 2030, with more than a third of that going to small business, according to an economic impact study commissioned by Project Wing.

The study by AlphaBeta says small business could reap an extra $10-15 million with drones able to reach more customers, more cheaply than by road.

AlphaBeta says businesses could reach up to four times the number of customers with drones bringing more households into range.

It says the current radius of food delivery in Canberra is only about four or five kilometres, but drones flying at 120km/h can deliver a package 10 kilometres away in less time than it takes a car to drive five kilometres.

Delivery costs could be cut by up to $12 million per year by 2030, assuming consumers receive a fee decrease that is proportional to the reduction in underlying costs, with costs for some items such as takeaway food falling in the long term by up to 80-90 per cent.

AlphaBeta says current delivery costs are prohibitive for some business, with restaurants paying around 30 per cent of each order value to online delivery service providers.

“These costs make it unprofitable for some businesses to offer last-mile delivery at all, despite a growing customer preference for online shopping and delivery,” it says.

“While the value is hard to estimate precisely, drone delivery could generate an additional 600,000 annual retail transactions in the ACT in 2030, worth around $30-40 million in revenue. This benefit could be as high as $12,000-$16,000 per relevant retail business,” it says.

AlphaBeta says drone delivery will suit new market entrants who do not have the scale of bigger companies to offer low-cost delivery, encouraging more competition in the ACT market.

“Drones could be a convenient, affordable option for new local businesses to participate in last-mile delivery and engage in e-commerce. This would facilitate a more productive, competitive business environment in the ACT,” it says. 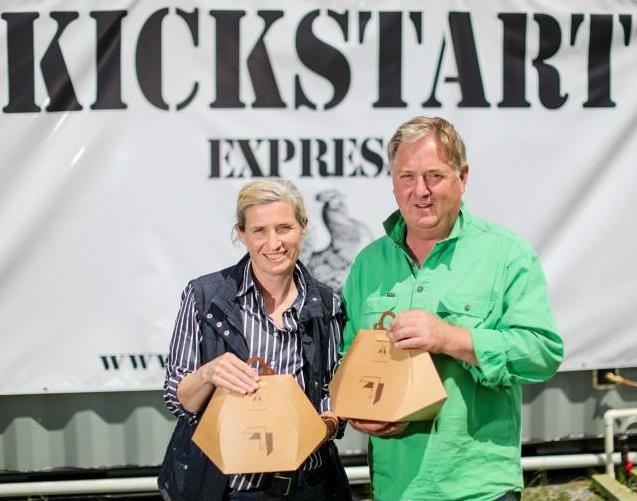 In a drone delivery trial with Wing, Fyshwick-based Kickstart Expresso has been delivering a limited menu of coffee and breakfast items to 150 potential customers in the Bonython region, making up to 40 deliveries in a three-hour session, averaging six to eight minutes from order to delivery.

Using drones, Kickstart could deliver hot coffee from a single location to 6000 households, compared with the 250 to 400 drive-through customers it serves each day, the AlphaBeta study says.

Project Wing CEO James Ryan Burgess, who visited Canberra last week and spoke to Gungahlin businesses and residents about the company’s move there next year, said AlphaBeta had made certain assumptions about adoption rates and what the penetration would be in the ACT but he believed they were ‘pretty conservative’.

He said the Bonython trial had shown testers were using the service even more than what Wing had predicted they would and appreciating its convenience and speed.

Next year, Wing will be based in a Mitchell warehouse where it will house its fleet of about 30 drones and, after consulting with the community, trial delivery services in the suburbs of Franklin, Harrison, Crace, Palmerston and Gungahlin.

The Bonython experience, which also sparked a storm of protests about noise and privacy that went all the way to Federal Parliament and prompted a Legislative Assembly inquiry, has seen Wing invest in quieter drones and move to reassure the community about privacy.

“If these aircraft are a nuisance to society then society is going to push back,” Mr Burgess said. “As the technology improves it has to show that it’s delivering value without negative impacts for it to be desired and adopted.”

For now, Wing is focused on delivering small, urgent, on-demand packages in the areas of pharmaceuticals, chemist items and food, although Mr Burgess admits that in time there could be bigger drones to carry bigger payloads.

“When you study what people need quickly, you don’t need very much of something, so we’re not planning to replace a trip to the grocery store to restock the refrigerator, but just those items that you need in a moment’s notice,” he said.

Wing’s biggest drone has about a metre wingspan, weighs 4.5kg, and is made mostly of lightweight foam material. They have 12 rotors instead of the standard four on other drones, to withstand multiple failures, but Wing is still to overcome the hurdle of being able to fly in bad weather, with rain affecting the electric motors.

Mr Burgess said deliveries to high-rise apartments was something for the future and Wing was focused on the suburbs where distance from services is more of a factor.

He said the Canberra trials were the most advanced in the world. “There is no other place in the world where we can do this and get that feedback from the community, saying what they like, what they don’t, what we can improve,” he said.

The next step was lodging a development application for its Mitchell warehouse and continuing to talk to the community.

There have been several recent threads about the problems that packaging waste is creating. Looking at the images of the giant packages that these delivery drones use to keep the coffee hot, shouldn’t there be some controls imposed on the waste they are generating?

$$$ versus amenable lifestyle for those poor people under the flight path.

The unexpected level of Public support I have received for my proposed Durian trial at the Legislative Assembly building, has me considering expanding it into the fancy Streets of both our local and federal politicians.

A Durian pop up food caravan, that I can drive to each politicians house, will generate a billion dollars worth of economic growth for the ACT. According to the AID budget (Australian Institute for Durian).

How many households are likely to pay a drone-delivery fee for a cup of coffee?

How do they ensure the delivery makes it to the right person at the delivery end? It seems like anyone could just walk up and take it…

Project Wing, please publish the figures supporting your business plan. The $40M “benefit” you talk about could not possibly be realistic. Also see a letter in today’s Canberra Times (21 Nov 18) where your forecast is challenged by sensible analysis.

Apparently they had a secret ‘pop-up’ display in the Gungahlin Marketplace last week. Quite obviously ‘ pop-up’ so they could flood it with their employees and friends.

How about they set up for a month in the centre of the marketplace, in some offices, in a school room, in a cafe, outside your bedroom and at the local club continuously playing actual volume drone noises and asking a simple questions:

Simple question…Are you happy with that noise?

Here is a “pop-up” solution to delivery drones: https://www.youtube.com/watch?v=mi3Ed-paCE4&pbjreload=10

This problem was already solved with a series of pneumatic tubes. Now we have the ‘internet’ (also a series of tubes) we should look into rebuilding this. Drone traffic will bring its own problems, not least of which will be danger to wildlife, noise and building landing infrastructure in high density apartment blocks.

Some information on noise and curfews may be of interest to those under the “flight path”.

My concern is that Airships promised huge financial and travel benefits for people in the 1930s, the Thalidomide drug was going to reduce the costs of Women’s sickleave by reducing Morning Sickness, Automated airport landing systems were promising to save airlines and airports billions of dollars.

Drones may yet prove to be a huge social and financial benefit to the world. I’m just dubious of financial claims for new technologies based off very limited trials.

I’m also concerned when the ACT government uses Canberra residents as guineapigs for Google, without a reasonable level of public communication and up front consent from the community.

I’d like to trial the sale of Durian fruit at the Legislative Assembly building. If successful, we could take a chunk of the $700 million dollar Chinese Durian market.

I’d be up for durian trials!

But seriously, the ACT Local Council has, for many years, had no regard to the wishes of its constituents. They know that the Canberra sheep will always vote in a Labor/Greens coalition no matter what, so they can basically do what they want.

There seems to be a segment within the ACT bureaucracy that is obsessed with being a ‘first adopter’ of new technology that is driving this agenda for mine. I can’t see pollies really caring one way or the other. Its like the smart parking trial in Manuka – does Canberra really need smart parking???

I have to agree with you on that.

What a surprise. A company pays for a study about itself and it comes back with a glowing recommendation.

I have yet to meet a single person who is in favour of this intrusion.

I shall have to learn how to use a slingshot …

Have fun in court, mate.

From a study commissioned by the company that is wanting to use drones. I wonder what the parameters of the research were?