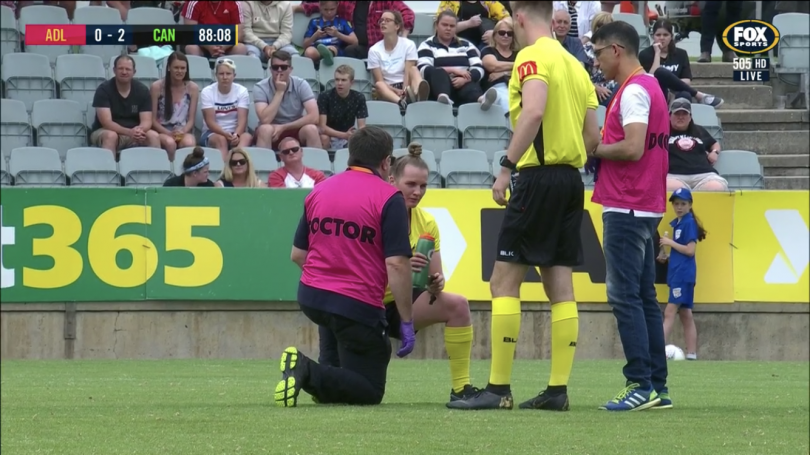 Referee Isabella Blaess in the 89th minute during Sunday’s game in Adelaide. Photo: Screenshots from Kayo.

Normally the one calling the substitutions, the referee in Canberra United’s fixture against Adelaide had to sub herself off yesterday afternoon after smoke blanketed the pitch.

Referee Isabella Blaess was forced to come off after going down clutching her chest for the second time, three minutes into the second-half stoppage time.

Canberra United captain Nikola Orgill also received treatment in the first half, being handed her asthma puffer by the team physio.

Region Media understands that players were saying the first half was really tough to play in due to smoke.

Ms Blaess is being checked out by her doctor as a precaution but is fine today (23 December) Region Media was told, while Football Federation Australia say they cannot confirm at this stage whether the incident was directly smoke related. 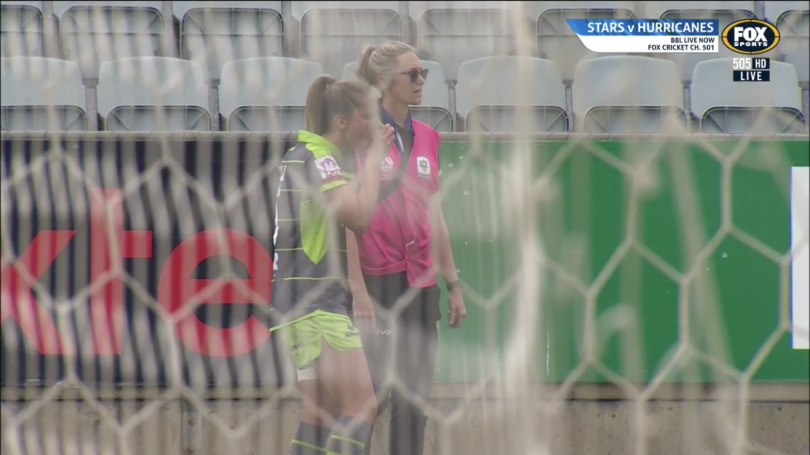 Commentator Robbie Cornthwaite said the smoke was pretty thick earlier in the match.

“The smoke has cleared a little bit. Earlier we could not see the hills which are only five or ten kilometres away, and they are quite clear now, so it has blown away with the breeze,” he said in the 27th minute as Orgill received treatment.

Co-commentator Stephanie Brantz also commented saying that “the smell of smoke is thick in the air”.

The South Australia Environment Protection Authority (EPA), which monitors air quality, told Region Media that at the 4:00 pm kickoff time, the nearest monitoring site rated the air quality as ‘good’; however, the air quality around Adelaide was just under ‘poor’.

Meanwhile, the Big Bash League (BBL) between Sydney Thunder and Adelaide Strikers in Canberra on Saturday night was called off due to concerns about air quality and visibility. The Thunder, chasing 162 for victory, were on 1-40 after 4.2 overs and were just four balls away from the minimum five overs required to constitute a game.

The game at Manuka Oval was abandoned because of “dangerous and unreasonable playing conditions,” the BBL confirmed.

Bushfires continue to burn around NSW and South Australia, with wind directions blowing smoke into the ACT from all directions.

ACT Health issued a health alert on Friday, Saturday and Sunday (22 December), stating that “all Canberrans are advised to avoid physical activity outside”.

“At this time, the smoky air conditions are expected to continue to impact the ACT while the NSW bushfires are burning, with dense smoke impacting parts of our region. For further information on weather conditions, visit www.bom.gov.au,” the statement said.