Snow to stick around a little longer for Canberra 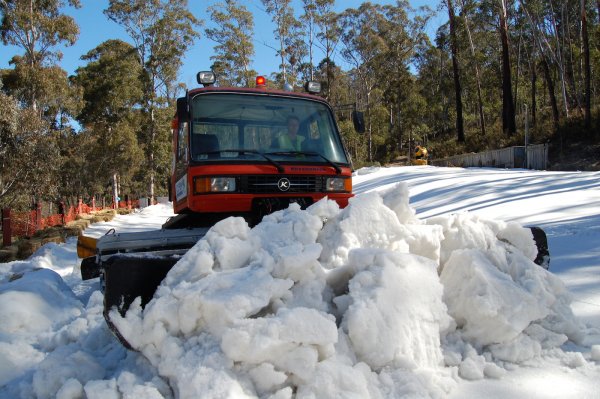 Spring may officially be in the air, but someone forgot to tell Corin Forest. After a bumper first winter returning to snowmaking, they’re not ready to call the season over quite yet. Snow play will be continuing on as far into September (or maybe October) as the cool nights allow.

The snow play area at Corin Forest was expanded to be approximately half as big again as originally opened during winter to cope with demand. The full area has a deep cover of snow, currently more than 1 metre deep on average, with significantly more in parts.

With cold nights this week allowing snowmaking and natural snow fall predicted for Tuesday 2 September, Corin Forest will be able to maintain a cover for at least a fortnight, with the team hoping to push that to the next school holidays. This will be a fitting extension of a successful return to a commercial snow experience for Corin Forest and Canberra.

Dane Liepins, General Manager of Corin Forest, said the big year for snow had been great for the all new Corin Forest team.

“We well and truly exceeded our expectations. We’ve had such a great response, with much higher visitor numbers than we expected to see this year. We made a lot of snow and had some great natural snow falls to go with it, giving us a great winter all around.

“The massive visitor numbers brought their own problems, with our infrastructure reaching its limit a few times and some teething problems with taking over the site showing up. They’re the best problems to have though, and we have some major works we’re hoping to complete over summer to increase our capacity for next season.

“We want to thank everyone who has visited us so far. We also want to thank them for their feedback on what they would like to see and how we can tighten up what we do. We’re really looking forward to brining those things together with our vision for Corin Forest and making some really exciting developments in the next few months.

“But our season’s not done yet – there is still plenty of time to come and enjoy the snow!” Mr Liepins said.

The Corin Forest website and social media accounts will have the most up to date information on snow conditions and how long snow play will be open.