So who decided the barbed wire was necessary? 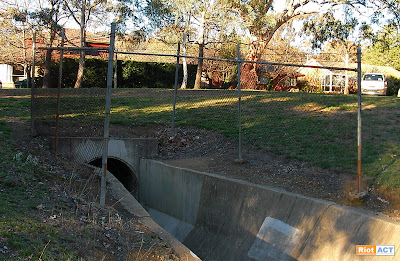 Many years ago a team of workers were dispatched to the storm-water drain forming the border between Ainslie and Watson.

Someone had decreed that where the Watson drain broke cover needed fencing. Maybe it does, someone walking along in the dark could in theory fall down there.

So they dug holes, poured concrete, set up posts and ran some chain link fence.

They don’t appear to have done a very good job.

The chain link doesn’t go all the way to the ground, and the fence only runs along three sides.

But it seems unlikely anyone will accidentally fall into the drain opening (as opposed to the whole drain which runs thereafter).

What I really want to know is who decided the whole thing then needed a double string of barbed wire running around the top?

Is it in fact a cunning piece of public art which has lost it’s plaque?

68 Responses to So who decided the barbed wire was necessary?
Filter
Showing only Website comments

Im on the pushie today and already done 80km this week.
Dont wanna add 2 or so km to my 16k ride home – ill suss it out tomorrow when I get soft and drive to work.

Suggest you head over for a spot of reconnaissance on the way home from work, Danman.

Just up the drain from Dickson College.

Definitely daytime, I think, and yes, where is this place?

are we doing it at night time?

My preference is for day time – mainly for safety assurance 🙂

Just need a stencil – I have a black spray can I use for framing.

Besides, I really have to see what this place is like before saying yay or nay.

Maybe I can do a half arsed fat bastard shuffle under the fence?

Well, we do need a spotlight searchlight …

i want to help, do u need someone to run distraction? I do a mean Mormon disguise.

Keep us posted about what you end up doing guys.

Email sent! This is pretty cool!!

I will have to dress up as an inmate per normal

It’ll be pretty damn funny when the fence collapses under your weight and you nut yourself on the post on the way down.

I shall assist you, Danman! This sort of quixotic escapade is right up my alley ….

I am pretty sure I have some old carpet somewhere, but I think that we will need a sign saying, “Standope Supermax’, and perhaps a couple of deckchairs and pina coladas to set the stage. I could get dressed up as a flight attendant prison warden!

I can source a helmet-cam, so that we may have a “Danman vision” record of the event.

Once I organise a camera crew, public liability insurance, on site catering and my agent brokering a decent wage for me.

Seriously though – I dunno…God knows where the Standope supermax is, and who will assist me…

When are you planning on doing it, Danman?

Test schmest – this is about spontaneity.

I’m happy to risk life (Barely) and limb (Maybe) to give fellow rioters a bit of a guffaw for a while.

Tim Gardner - 3 hours ago
Agents are not being fair in this current market, I know of 2 sales in 2 weeks that the asking price was accepted, then the a... View
James Watt - 6 hours ago
Joel Suryawanshi if you were selling your house, wouldn’t you want your agent to maximise your sale price? Not sure why the... View
News 1

Capital Retro - 3 hours ago
Careful what you wish for or you will cop the FOGO odour as well. View
News 2

consumeradvocatecanberra - 4 hours ago
I am a Vietnam Vet and spent 40 years in Defence. I try to keep abreast of the mumbo jumbo that is coming from the Government... View
TimboinOz - 6 hours ago
Long overdue. It's NOT just the fallen. It's also the ones who come back, permanently damaged. There are way more of them tha... View
Community 2

@The_RiotACT @The_RiotACT
As the winter chill descends, Canberrans are donning their traditional winter garb. But our weekly poll asks if it's a flannie, a flanno - or a booner doona? https://t.co/JemNWfUBre (45 minutes ago)