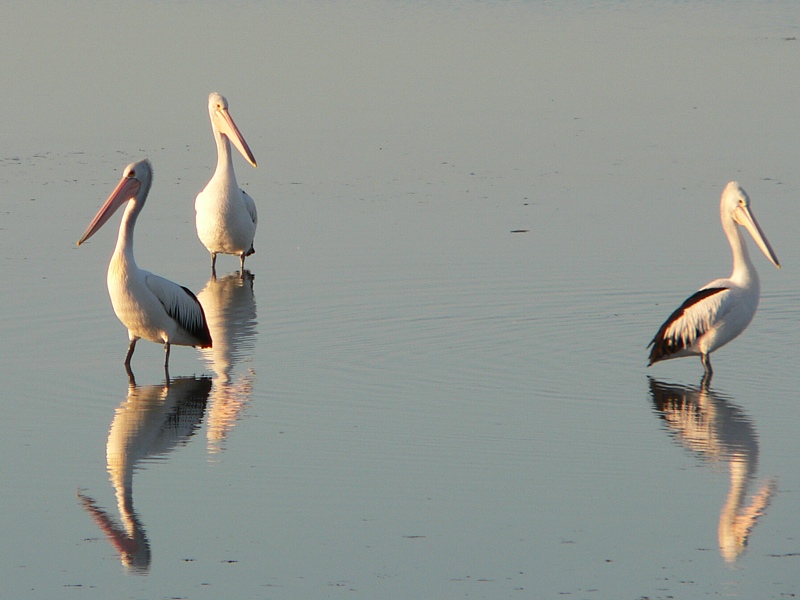 Pelicans are an excellent source of reflection in stressful times. Photo: Ian Fraser.

There is no disrespect intended in that title as there are some things no-one really knows about these familiar and wonderful birds.

Mary Hannay Foott brought our attention to one such mystery in her 1881 poem, Where the Pelican Builds, the reference being to some unknown utopia in inland Australia “where the pelican builds her nest”.

(Mary Black’s family came to Australia from Glasgow when she was a child. She later married Thomas Foott and they moved to Bourke, and then south-west Queensland. Following her husband’s death, she published a book of poems featuring Where the Pelican Builds and later wrote for newspapers. Foott Street in Garran is named after her.)

The strange fact is we understand almost nothing about where pelicans breed. The most authoritative accounts admit that Australian pelican breeding in general is ‘poorly known’, which is strange considering it is such a common and widespread bird.

There are scattered records from every state in Australia, although not the ACT. In NSW, these are sprinkled from the Riverina to the Darling to the North Coast, but every time was just a one-off event.

Most birds breed in the same area every year. However, pelican breeding colonies were established at Lake George in 1963 and 1968, with hundreds of nests, yet they didn’t produce a single chick.

It seems that essentially all Australian pelicans derive from only two breeding sites, just one of which is permanent. This rookery, on islands in the north of the Coorong, South Australia – Storm Boy country – produces all of Australia’s pelican chicks for almost any given year.

The other reliable, though very sporadic, source of baby pelicans is on various far-flung inland waterways of the Lake Eyre basin during rare flooding events. In 1990, around 100,000 pelicans (perhaps a third of all the pelicans in Australia) on Lake Eyre produced 80,000 to 90,000 chicks, which later dispersed throughout the continent, including Canberra’s lakes.

But how do they know where and when to go to meet at the rare distant floodwaters? We have no idea. Stories of detecting distant thunderstorms or barometric variations are fanciful – Lake Eyre generally fills from rains having fallen months earlier and thousands of kilometres away.

I wonder if experienced old birds are just constantly drifting across the land to check out the conditions; if they don’t come back, others go looking, too. However, that’s just speculation. Whatever the answer to that one, reliance on rare events for major population boosts suggests that pelicans must be long-lived. But as you’ve probably guessed by now, we don’t know that either. 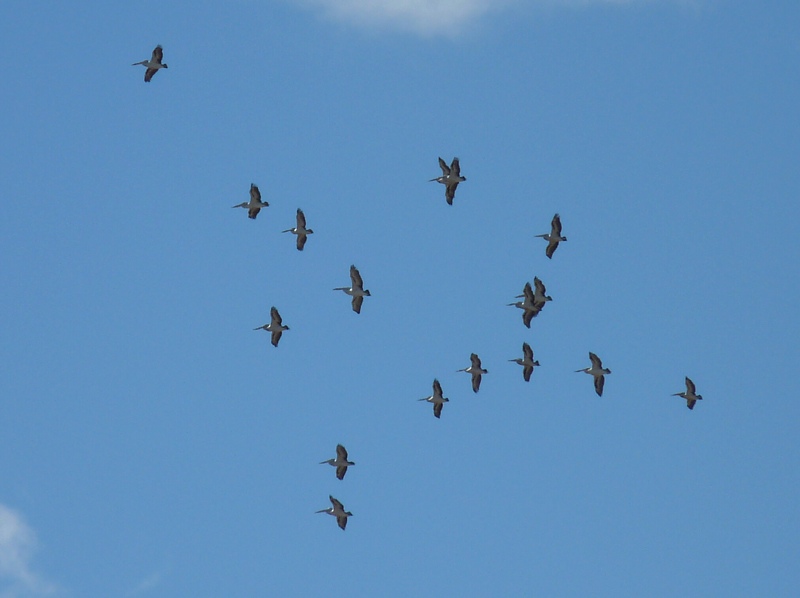 Another serious weirdness associated with pelican breeding concerns the well documented convulsions into which every single pelican chick goes after being fed. For about a minute it thrashes about, biting anything within reach, including itself. Then it collapses for about 30 seconds, before becoming ‘normal’ again.

If the chick is fed again afterwards, there is no reaction. If there are two chicks, only the larger ones does it. And yet again, we have no idea why. Suggestions of ‘exaggerated begging behaviour’ seem a bit lame. Mind you, if I were being fed fish that had been carried without being digested inside a hot pelican for some hours, I might convulse, too.

What about the stories of more unusual food sources, including small dogs? Well, yes and no. There are well-authenticated incidents of pelicans seizing and drowning annoying silver gulls, then eating them, and a much-cited case of a mother grey teal – a small native duck – and her entire brood vanishing down a pelican’s gullet.

But tales of chihuahuas and other little dogs going the same way seem to belong in the urban myth basket.

Next time you admire the pelicans on Lake Burley Griffin or at the coast, consider the journeys which brought them there. They may have hatched on the windswept Coorong or under a blazing Lake Eyre sun. In their lives, they may have travelled to Kakadu, Perth or Tasmania – or all three, and more – climbing high on rising hot air currents then drifting for tens or hundreds of kilometres without exerting any energy at all.

There is just so much we don’t know about pelicans, which is a healthy thing for us arrogant humans to contemplate. And now is a good time to think about something entirely different for a short while.

I know quite a few pelicans on Capital Hill....

Kay Eliza Emma also they hang out in gangs

Jess Crilly did you co-write this with Ian?

Neil Curtin I know someone who will know. 😂

What a fabulous article to read right now! Thank you Ian!

They eat whole pigeons alive. I saw it happen once. It was gruesome. 😢

Helen Ormandy True story. In St James’s Park in London. Rather detracted from the experience of being in that beautiful place.

Once down the coast i seen a big group of adults with their big groups of babies all swimming together.

They stayed away and they were at a distance. Pretty cool to see as was first time to see baby pelicans

Craig Sutton - 2 hours ago
Kathie Nash Yeah thanks scoop 🙄 I was referring to the entire northern part of Australia. Cairns, Townsville, Darwin etc... View
Sharon Cabban - 2 hours ago
Lani Metcalfe future for Jack View
Kathie Nash - 3 hours ago
Canberra will never get its own AFL team while we only have a 'stadium' that holds 13,000 at maximum. Need a bigger stadium t... View
News 31

Julie Macklin - 2 hours ago
Peter Hatfield Not faster if the bus gets stuck in peak hour traffic in Sydney, as has happened to me. I used to catch the bu... View
Peter Hatfield - 3 hours ago
Or just go to the Jollimont and catch a comfortable coach and be in Sydney an hour faster, and at a fraction of the real cost... View
Greg Myat - 5 hours ago
Ross McConchie I agree with you entirely about using rail more to get trucks off our main routes. But trains are the most eff... View
Property 13

Kacey Butterworth - 2 hours ago
Tim, let’s move. View
Jodie Kerec - 3 hours ago
Lisa Van Schieveen we could live here together. View
Gabrielle Driver - 4 hours ago
Lauren Edney look how nice it is. I'd have the cottage View
Sport 7

Donna Hofmeier - 3 hours ago
Why ? NSW Rugby have never been kind to us. View
News 5

Morven Isla - 3 hours ago
Trees are wonderful and I’m all for making things green. However the thing that we need more is public rubbish bins! The AC... View
accessdenied - 3 hours ago
Pretty cheap really. I find that the people that whinge about the cost are the people that expect the labourers to work for $... View
kenbehrens - 3 hours ago
I walked along a footpath behind a townhouse complex today. On both sides of the footpath were gum trees. The thing that caug... View
Lifestyle 1

kenbehrens - 4 hours ago
I don't have a big lot of space, so I concentrate on high yielding vegies. Mostly, zucchinis and "cherry" style tomatoes, tha... View
Food & Wine 4

@The_RiotACT @The_RiotACT
The new #VaxTheNation campaign is urging Australians to get the jab for COVID-19 so music venues can return to hosting gigs and delivering live #entertainment https://t.co/lo3ejx179F (3 hours ago)

@The_RiotACT @The_RiotACT
An incredible phenomenon in the heart of Belconnen, the '#Pink Lake' in #Bruce is now in full bloom. But what gives Canberra's hidden natural gem its dazzling colour? https://t.co/0L5c69vbOo (4 hours ago)

@The_RiotACT @The_RiotACT
The ACT Government has established a dedicated quarantine facility to support vulnerable Canberrans and those who may find it difficult to stay at home https://t.co/BLnFyG5dx4 (5 hours ago)