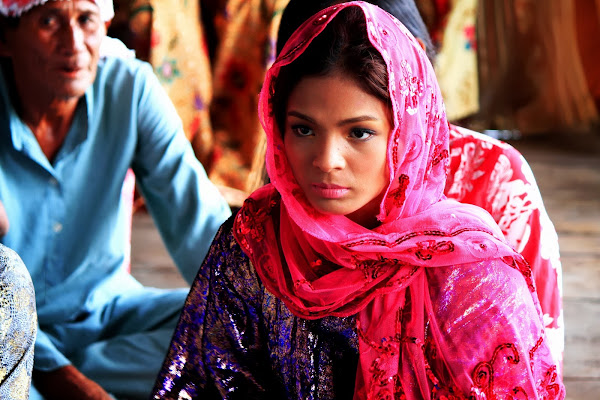 Regional Intersections 2013 is Australia’s only film festival dedicated to new cinema from the Southeast Asian region, and it runs from Thursday the 5th to Thursday the 19th of September.

SAT 7 SEP 3.30PM
THY WOMB
(Sinapupunan) Dir: Brillante MENDOZA, Philippines/France 2012, 82 mins, DCP, (unclassified 18+)
Fisherman Bangas lives with wife Shaleha (Nora Aunor) on the Philippines islands of Tawi-Tawi He’s a devoted husband. But Shaleha knows that Bangas needs the offspring she cannot give him. So she has to take charge of the search for her own replacement in their marital bed. Brillante Mendoza’s new work is a new departure from his usual focus on urban Manila life. Canberra premiere.

SAT 7 SEP 5.15PM
TANG WONG
Dir: Kongdej JATURANRASMEE, Thailand, 2013, 86 mins, DCP, (unclassified 18+)
For a loose group of modern Bangkok teens, traditional Buddhist spiritual beliefs are for grannies and country bumpkins. But there’s a little shrine on the street corner they often hang out on – and coincidentally one day the prayers all have offered there suddenly work out. The new film from Thai director Kongdej Jaturanrasmee’s (P-047) seems at times like a teenage backstage musical. Yet its director careful reveals a cautionary fable of contemporary Thai youth’s frustration with official values. Canberra premiere.

SAT 7 SEP 7.30PM
THE DANCER
(Sang Penari) Dir: Ifa ISFANSYAH, 2011, Indonesia, 107 mins, digital, (unclassified 18+)
Beautiful Srintil is a ronggeng dancer in a poor Javanese village in the mid-1960s. The villagers see her skills as a sign of the indang, a spirit of prosperity and order. Village boy Rasus loves Srintil deeply, but the ronggeng also hints at ritualised prostitution. The two lovers are driven further apart as President Sukarno losses power and the country is gripped by the violence that overtook the nation in late 1965. From Ahmad Tohari’s novel, Ronggeng Dukuh Paruk, this is a different perspective on the events explored in the documentary, The Act of Killing. Canberra premiere.

SUN 8 SEP 2PM
ATAMBUA 39° CELSIUS
Dir: Riri RIZA, Indonesia, 2012, 90 mins, DCP, (unclassified 18+)
13 years after Timor Leste’s 1999 independence referendum, ex- pro-Indonesian militia cadre Ronaldo (Petrus Beyleto) now lives in the West Timor border city of Atambua; drunk, bitter and indifferent to the son Joao (Gudino Soares) he took with him as he fled Timor Leste. It’s little surprise that Joao seeks out Nikia, a girl visiting from his home village. Riri Riza’s new feature is a story from the backwater of East Timor nationhood – one that reveals how much unfinished business there is for the island’s next generation to sort out. Canberra premiere.

SUN 8 SEP 4.30PM
CONG BINH – THE LOST FIGHTERS OF VIETNAM
(Công Binh, la longue nuit indochinoise) Dir: Lam LÊ, France/Vietnam, 2012, 100 mins, DCP, (unclassified 18+)
In 1940 a generation of young Vietnamese men was shipped to France to do the manual labour of war. But French defeat trapped 20,000, exposing them to the racial abuse of the Nazis and the faint distrust of Vichy French. Many only came home after years of colonial war and French defeat at Ði?n Biên Ph? in 1954 – to a sometimes less than warm welcome. Pioneering French-Vietnamese filmmaker Lam Lê’ tells the story of a generation that world war and then cold war uprooted and then never let settle. Australian premiere.

FRI 13 SEP 7PM
ON THE JOB
Dir: Erik Matti, Philippines, 2013, 121 mins, DCP, (CTBC)
If you’re running a modern day Murder Inc. – a crack death squad who can assassinate your enemies in broad daylight, then disappear until next needed – where is the best place to cold store them until next needed? And how to keep your killers on a leash? Whilst other new Southeast Asian movies have received festival awards in 2013, this is the film most industry insiders were talking about. It’s got the energy level and street smarts of the Hong Kong action movies of John Woo and Johnnie To. And Hollywood’s already lining up to remake the film. Australian premiere.

SAT 14 SEP 2PM
THE YEAR OF LIVING DANGEROUSLY
Dir: Peter Weir, USA/ Aust., 1982, 115 mins, 35mm, (M)
Now that the unfinished business of the killings of Indonesia in late 1965 is remerging as a theme in current cinema, it’s worth returning to Peter Weir’s adaptation of C J Koch’s novel – in part based on Koch’s own experiences as a mid-1960s, Jakarta stationed journalist. The script is by Weir and David Williamson; Mel Gibson stars as journalist Guy Hamilton, with Linda Hunt in her Oscar-winning, cross-gender performance as Hamilton’s ‘fixer’ Billy Kwan. From the NFSA collection.

SAT 14 SEP 4.30PM
WHAT ISN’T THERE
(Ang Nawawala) Dir: Marie JAMORA, 2012, Philippines, 116 mins, DCP, (unclassified 18+)
Traumatised by the childhood death of his twin brother, Manila teen Gibson now only shares his words – and the occasional joint – with one person: the ghost of his twin, who in Gibson’s imagination is a cooler version of himself. Marie Jamora’s romantic comedy is an unexpected introduction to the delights of Pinoy pop music – and to a John Hughes-style teen comedy/melodrama that’s proof that Philippine movies don’t just have to be grim stories from the slums. Australian premiere.

SAT 14 SEP 7.30PM
ILO, ILO
(?????) Dir: Anthony CHEN, Singapore, 2013, 99 mins, DCP, (unclassified 18+)
Brat Singapore schoolboy Jiale is uncontrolled by his anxious mother and ignored by his suddenly unemployed businessman father. A new Filipino nanny, Auntie Terry at first endures and then tames his behaviour – through a quiet resilience that slowly begins to intimidate Jiale’s mother. Ilo Ilo was the winner of the Camera d’Or at this year’s Cannes Film Festival – the first Singaporean prize-winner of any sort at a major international film festival. Canberra premiere.

SUN 15 SEP 4.30PM, THU 19 SEP 2PM
THE MISSING PICTURE
(L’image manquante) Dir: Rithy PANH, France/Cambodia, 2013, 90 mins, DCP (unclassified 18+)
A startling winner of the 2013 Cannes film festival Un Certain Regard, the new work from Cambodia’s great documentary filmmaker Rithy Panh is more film memoir than factual filmmaking. Panh was 13 in 1975, when the Khmer Rouge entered Phnom Penh. What happened in the years following to him and a more than a million others was unfilmed and is perhaps unfilmable. Panh instead uses the clay figurines of French-Cambodian sculptor Sarith Mang, as mimetic toys to express and cushion memories that only the mind’s eye can see. Canberra premiere.

[Image from Thy Womb]

Stavros Baa - 21 minutes ago
Gone like our freedoms View
Leane Belgrove - 1 hour ago
Sad, such an iconic structure. 😔Times march on.. View
Robert Taylor - 7 hours ago
I suppose it was unsafe and could not be kept for pedestrians & bikes. Sad View
Opinion 34

Ian McLeod - 6 hours ago
Charles Godworth yes I do and I also upgraded to three phase and will install a Zappi charger, but most won't need it. The po... View
Ian McLeod - 7 hours ago
Ben Garden which is what I'm doing and around town 2KW home charging is fine View
News 27

Patrick Robertson - 11 hours ago
Give it some mince to eat. View
Mick Bailey - 12 hours ago
Q. Has he done something to the bird to cause it to "single" him out? Respect their intelligence. View
News 249

Nick Swain - 13 hours ago
Griffin had a coherent public transport system based on rail including a track from QBN, through Civic and on to Yass. What a... View
show more show less
*Results are based on activity within last 7 days

@The_RiotACT @The_RiotACT
Would you like to catch an intercity train from Civic? The #Kingston railway station has only three #trains per day, so do we need a new site and service? Have your say in this week's poll https://t.co/9Nc53VrNgb (9 hours ago)

@The_RiotACT @The_RiotACT
After last fortnight's Chinese #food triumph, David Murtagh thought he'd take a punt on #Turkish. It was a hit - if only he could locate the missing cutlet https://t.co/YH3WSOOk2p (10 hours ago)

@The_RiotACT @The_RiotACT
A major apartment complex is planned for the former Italian Club site in Forrest but first, the land will need to be rezoned https://t.co/Qo0qxhm2yQ (12 hours ago)