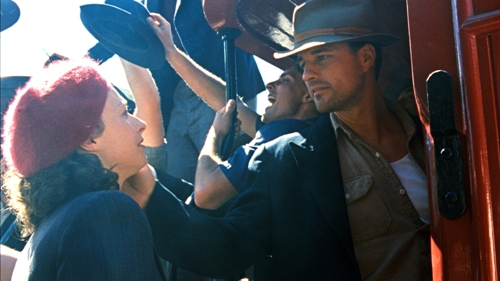 HOME BY CHRISTMAS Introduced by Director Gaylene Preston, followed by Q+A after the screening.

In the late 1980s New Zealand filmmaker Gaylene Preston began researching the lives of local NZ women during World War Two. She began with the stories she thought she knew best: those of her own parents. Although her focus was initially on the women’s war and would evolve into her acclaimed film War Stories, conversations with her father Ed increasingly made her aware of how little she knew of his experiences. A feature film companion to War Stories began to emerge; not the usual nostalgic fantasy of home front community life, but a memoir of the quotidian, private and sometimes humiliating experiences of being an ordinary soldier in wartime.

Home By Christmas’ impact is precisely the result of the modesty of its aims and of the life it recounts, as Ed begins his war as a raw recruit and ends it in the wretched conditions – and boredom – of a POW camp. Gaylene Preston herself is a moving presence, as a mostly off-camera interviewer (as is also Chelsie Preston-Crayford – the director’s daughter – as Ed’s young, wartime bride). But Home By Christmas’ lack of much exposure to Australian audiences is all the more shameful and undeserving because of its great, warm centre: iconic Australian actor Tony Barry as Preston’s elderly, understated but occasional still fiery father.

Sometimes one hears people wondering wistfully why New Zealand films are often stronger than Australia’s. I leave the question open, while strongly commending Gaylene Preston’s excellent Home by Christmas. The main actor is, however, one of our boys; Tony Barry gives a wonderful performance as the director’s father. (Sylvia Lawson)

Diane Clare - 5 hours ago
Lizzie Rose - we used to stop there for dinner on the way down to Broulee. Do you remember getting a lolly from the dolphin c... View
Community 3

MERC600 - 7 hours ago
Tis a sad thing. Have wandered in at various times over the last 30 odd years, and will miss the tav and Jenny and Gumby. Sti... View
John Coleman - 7 hours ago
Alicia Conley as long as your protest doesn’t delay my McNuggets order thanks View
Opinion 106

Dan Adams - 7 hours ago
Sign and share the petition to return the limits back to 60km. https://chng.it/chvTLkD8bc View
News 198

Dan Adams - 7 hours ago
Sign and share the petition to return the limits back to 60km. https://chng.it/chvTLkD8bc View
Community 23

bj_ACT - 7 hours ago
The Xpresso buses used to get people from Tuggeranong suburbs like Kambah and Wanniassa or Calwell and Richardson into Civic... View
News 24

@The_RiotACT @The_RiotACT
When it comes to collecting, we reckon there are few wiser than Canberra's Angela Plant. After all, she collects owls - a group of which is called a Parliament - such is their perceived cleverness (or the name's ironic) https://t.co/Bv0XLJgpNL (4 hours ago)

@The_RiotACT @The_RiotACT
The winners have been announced for a Father's Day scarecrow competition, with more than 600 votes cast on 51 colourful and creative entries. Take a browse through some of the entries https://t.co/BSQd7MWk8A (5 hours ago)