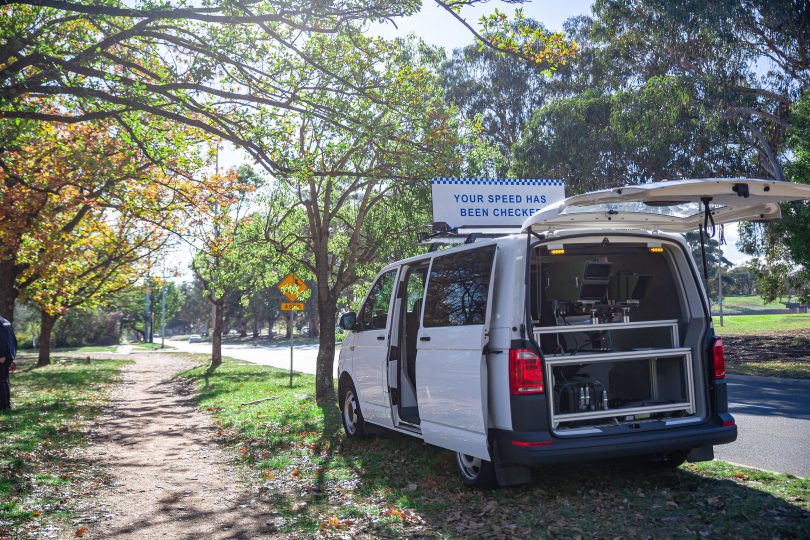 Police are investigating the shooting of a mobile speed detection van. Photo: File.

A government speed detection van on Canberra Avenue has been shot at in an apparent drive-by attack, police said.

An ACT Policing spokesperson said police were looking for a silver station wagon driving past at the time of the incident that occurred about 9:40 pm last Monday (12 October).

One bullet struck the sign fixed to the top of the van when it was parked on the median strip of Canberra Avenue near the intersection with Eyre Street and Lefroy Street.

Detective Acting Inspector Adam Liversidge said the public may not realise that speed vans are always crewed by operators inside.

“ACT Policing worked closely with Access Canberra when the incident was first reported to ensure there was no ongoing risk to safety,” Detective Acting Inspector Liversidge said.

“No one should be put at risk doing their job from reckless behaviour like this. All speed vans have high-quality CCTV around their vehicles, which police are reviewing as part of their investigations.

Detective Acting Inspector Liversidge also said officers had seized a firearm which could be linked to the incident, and forensic analysis was continuing.

Forensic and ballistic examination of the damage to the sign indicates that the weapon used is not the same as firearms issued to AFP officers.

Earlier this month, a police firearm was stolen from Australian Federal Police (AFP) vehicle in Fraser.

Anyone with information that could assist police is urged to contact Crime Stoppers on 1800 333 000, or via the Crime Stoppers ACT website. Please quote reference 6646275. Information can be provided anonymously.