Here’s a picture out of WIN news, video to follow, of Mr. Stanhope weeping over the hurt caused to his wife by Liberal beastliness. 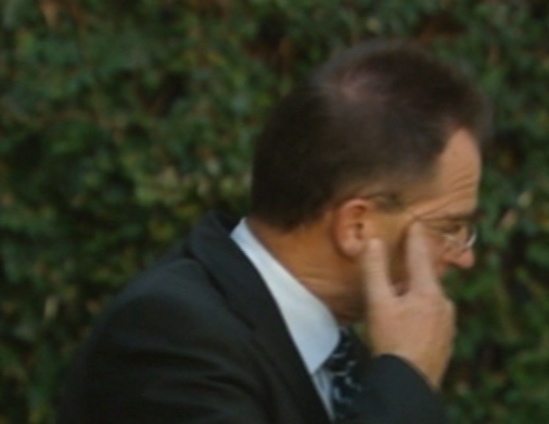 Something apparently is a “Mongrel act by a mongrel party”. At this stage we’re unsure whether the mongrel act is:

a) asking why the acting Minister for Emergency Services was incommunicado, as rivers of fire surged towards our city, the night before Duffy burned down, or

b) spreading the same sort of nasty rumours about Mr. Stanhope’s love life that his cohorts in the ALP took (and take) such glee in spreading about Kate Carnell.

Better minds than ours have it all figured out we’re sure.

No sign of an apology to the whole of Tuggeranong for using it as a pejorative and suggesting is is a place where Brendan Smyth should return to get “down with the cigarette butts and the dog turds and the wasted life”.

And here’s the video:

Interesting both ABC and WIN are ignoring Mr. Stanhope’s bizarre comments and leading with his line that this is about the rumours.

The rumours have been out there for at least 3 1/2 years and only now he goes weepy for the cameras about it?

Ending the current practice of politics being a lifelong career would be an excellent start.

frankly, i’ve always thought anyone who wants to be a politician should automatically be disqualified thereto…

rekkun a few seven years olds and a nanny would be a better system. anyone wanna volunteer their kids? or mother-in-law?? 🙂

So you catch them in the cover up, not the crime. Often that’s much easier.

But if the don’t even need to cover up what they’re doing? Woooweee! That way lies bedlam.

The thing is, sunlight is never going to reach everywhere. So your ideal of getting totally honest people at all times is a non-starter.

What you’re going to get is people who are better at concealing their dishonesty. Who can hide their influence better. And who’ll be able to cream us much more efficiently.

As always, if you just accept that everything’s going to be a little bit crap, you get by in life much better…

Well if the dishonest stand to profit little who will be left?

You actually think the business world is going to stand for HONEST people in government?

I never realised you were a hopeless idealist, JB. That’s … kind of sweet, actually…

Sunlight is the best disinfectant.

Once the cockroaches have scurried away we might be surprised by who stands up without having to fight their way to the top the heap.

And hence we’ll end up with ever more incompetent governments. Which, hey, you get a chance to pick over for their misjudgements!

Well, it works out well for the press, so it must work out for everyone, hey?

Where does the line exist between â€œworthy of having their privacy invadedâ€ and â€œnot worthyâ€?

Hm, that’s interesting. Would you consider yourself to be in public life, JB? I mean, you definately have a public presence here, and you engage in fairly robust political debate, so your life is, by that definition, somewhat public.

Where does the line exist between “worthy of having their privacy invaded” and “not worthy”?

Yes, I do think that’s a journalistic nonsense – the old “you’re in public life, therefore you can have no private life until you retire”. Journalists seldom think that they, themselves, are living as public a life.

If Stanhope wants a right to privacy he should retire from public life.

Oh, okay, Barking uses “gay loving” as a term of abuse. Which is enough to instantly dismiss him into the second-rank of rabid fools.

I’m a bit miffed I didn’t get a guernsey simbo!

Nope, they’re just ranting for the sake of ranting. JB likes to believe he’s Bernstein and/or Woodward, and this is his chance for a Watergate. Thumper and Maelinar have legitimate grievances as members of the SES (who have remained underfunded and undersupported). Ditto VG, as a member of our Federal constabularly. And Nyssa, as a member of our teaching force. SGS is just a right-wing-talkback radio listener. Bonfire’s a looney. VY is a looney with a car.

As for the rest of them – well, this is a public board. You get all types here – some people have hidden agendas, some don’t. Some randomly beleive that gay marriage is the worst thing ever since Steve Waugh retired as Australian Captain.

My advice is, don’t stress. We’ll be onto something else in a second. And if anybody believes Riotact represents the voting public of Canberra in any meaninful way, dear god are they in for a massive shock next election day.

avacry wrote: The shame is Stanhopeâ€™s inability to answer a simple question. Not doing so shows he lacks integrity.

but there is another (equally valid) reading of his answer, that he DID have integrity – regarding his principles on privacy.

why do you privelege one reading above the other? that is the question no-one objecting to my posts (and pandy’s) have answered. c’mon. why?

are you smyth acolytes?

Very Good, does Grant have a close association with our tearful mayor?

Maybe we should just elect a board who could then appoint a CEO for the ACT. This person could then focus on delivering key services (to which their performance bonus would be tied). Of course, they would be available 24×7 (like real executives actually are), and would understand things like performance metrics and revenue results.

Then we could actually get some real societal benefit from Australia’s boom time, and we wouldn’t have to waste time on stupid crap like gay marriage (unless both chicks are hot).

Hansard suggests he was made a special magistrate in 2002.

I would have thought there was a bit of difference between sitting two or three days a fortnight on a traffic/small claims list as a Special Magistrate to being given a $180K p/a appointment for life as a fulltime Magistrate.

Shrinking the â€œACTâ€ down to the NCA boundaries would seem to be the obvious solution as the Federales have list interest in having a city.

Lack of response to the airport is delat by:
Not providing an ACTION bus service out there.
Not fixing the roads.
I reckon the guvmint is doing a pretty good job then. They cannot do anything else. In fact in Federal Parliament there is a bill to restrict these types of mega-complexes from being built on airports around the country.

Candace Aitchison - 4 hours ago
Lucy is amazing!! Such a beautiful young lady! It’s always such a pleasure going into the chemist 🙂 Congratulations Lucy... View
Anthony Crocker - 10 hours ago
I’ve always found her very helpful, friendly and knowledgeable. Congrats 🥳 View
Phyl Oliver - 11 hours ago
Congratulations Lucinda, you are at the best chemist ever! View
Sport 5