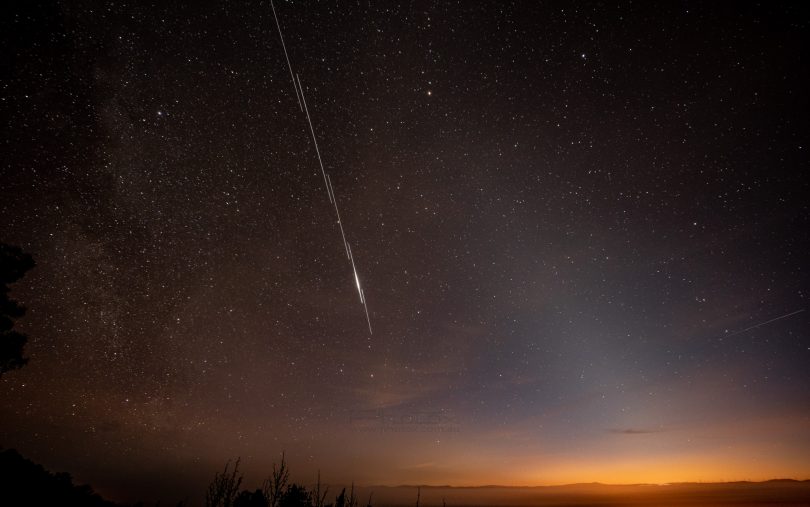 The Starlink satellite with a meteor on the right over Lake George this morning. Photos: Photox – Canberra Photography Services.

Stargazers, astronomers and photographers looked to the east to witness a rare torrent of shooting stars early this morning.

The streaking-light show was from the Eta Aquariids meteor shower comprised of rocks and ice from Halley’s Comet, and was visible while the sky was at its darkest around 4 am.

The meteor shower is the thickest part of the dust trail from Halley’s Comet and can be glimpsed in our skies annually. The comet itself is only visible from Earth every 75 to 76 years and is the only comet visible to the naked eye that might appear twice in a human lifetime. It will next appear in mid-2061 to 2062.

The meteor shower phenomenon was highly visible last night, although skywatchers said the added light from a full moon distracted somewhat from the experience.

One of the best vantage points was Lake George, with a good view to the east where the meteor shower was most visible.

Photographer Ben Appleton, who has shared his images with Region Media, said there were about 30 people at the lookout, all socially distanced while getting as close as they could to view the bursts of light across a starry night sky. 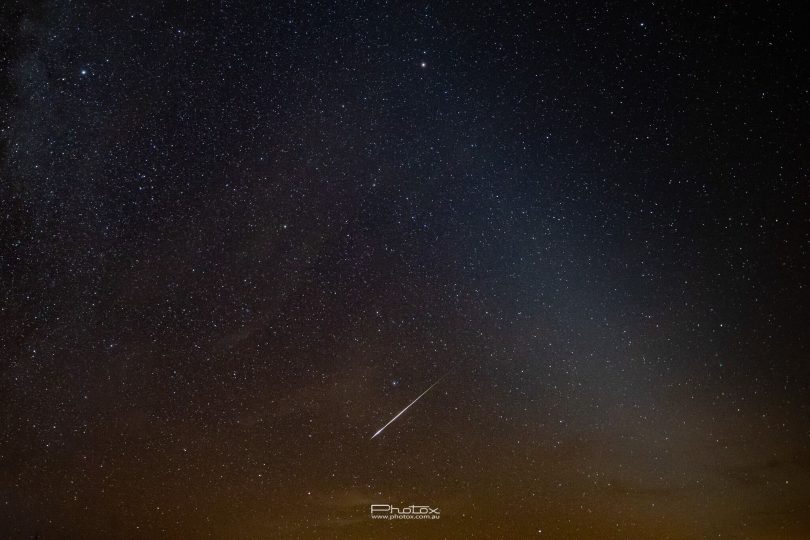 The meteor shower is captured shooting its way among the stars as seen from Lake George.

“Some were taking photos, others just rugged up and staring up at the skies. You could see quite a few meteors without a camera,” Ben said.

“Condition-wise, it wasn’t ideal due to the moon setting so late this morning, but because the skies were clear, I decided to head out there to see what I could capture.”

It didn’t take long before streaks of light appeared and Ben began shooting the shooting stars.

“The image I posted was captured 20 seconds after setting up my camera,” he said.

Ben took the image with 10-second exposures, with an aperture of f/1.8, an ISO of 2500 and a Miops timelapse trigger.

He said just before dawn, Elon Musk’s Starlink satellite could be seen slowly orbiting while the meteor shower continued to burst at regular intervals.

The meteor shower will be visible again on Thursday morning, although with the full moon at its brightest, conditions may not be ideal.

Dr Brad Tucker, of the Australian National University, said while the meteor shower is an annual occurrence, this year provides the best chance of the shooting stars aligning.

My goal was to capture a few meteors and potentially the comet SWAN, but I also ended up capturing Elon Musk's Starlink satellite train!

Posted by Photox – Canberra Photography Services on Tuesday, 5 May 2020

Sue McColl - 22 minutes ago
He “locals” are a small ,loud,opinionated group; there is no “prime agricultural land” anywhere in sight but an old s... View
News 13

Sandra Bowe - 41 minutes ago
Karin Hill thanks for the link Karen, just called the hotline as buzzing still evident in ceiling, good to get advice .. View
News 15

Nell Feneck - 50 minutes ago
Another well done project by ACT Labor 🤦🏽‍♀️🤦🏽‍♀️🤦🏽‍♀️ View
nobody - 7 hours ago
So the pool has been out of action for a year, and they are just concluding the tender process for repairs now, then the repa... View
Kim KD Winks - 8 hours ago
Seems legit. Why not stuff something up and then walk away with your hands in the air, shouting I don’t care!!! Happens so... View
Community 19

Bec Swift - 1 hour ago
RIP Mr Frugii View
Chelsea Adhami - 6 hours ago
Any word on when the funeral will be? View
Sport 5