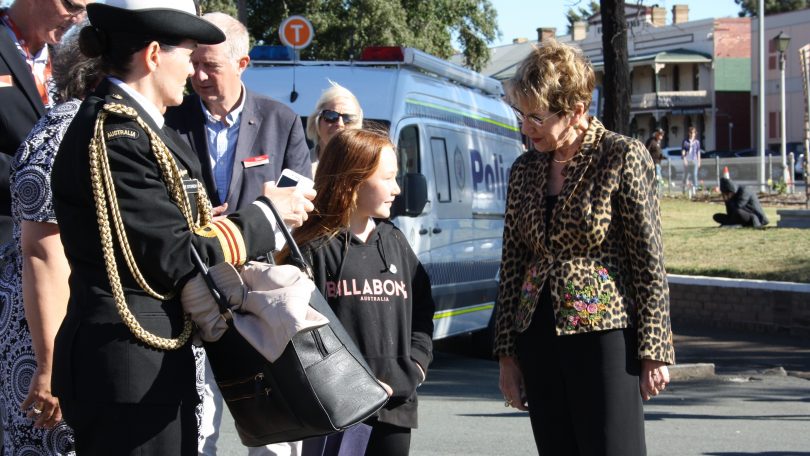 NSW Governor Margaret Beazley AO, the first woman judge to be appointed to the NSW Court of Appeal, talks with young fan Jaime Webb at the 150th celebrations of the arrival of the railway in Goulburn on Saturday. Photos: Maryann Weston.

Goulburn’s railwaymen dusted off their memories, celebrating mateship and shared history, at the weekend celebrations marking the 150th anniversary of the arrival of the railway in Goulburn.

The celebrations included a visit from NSW’s new Governor Margaret Beazley AO in a steam train with husband Mr Dennis Wilson, the burying of a time capsule, historic displays, a sesquicentenary ball and the planting of a commemorative Oak tree in Goulburn’s Belmore Park.

For the railwaymen, it was a weekend to visit yesteryear; remembering it with pride. Former steam train driver Dale Wake echoed the thoughts of many when asked about his strongest memory: “It was the mateship. We helped each other out, learned from each other, and we brought others [who were learning] along with us.”

Dale was among the last intake of drivers to be trained in ‘steam’. It was precision driving back then, without speedometres and relying on timing and knowledge of the track.

“The fireman would start shovelling the steam at the bottom of the hill…you had to know the track, the speed boards, the signals, and the crossings. Speed was monitored by a watch, the track and the load you were carrying,” Dale said.

The official celebrations began with the arrival of Governor Beazley who acknowledged Goulburn’s unique place in the history of NSW Railways. In fact, the development of the railway to Goulburn, the first from Sydney to the inland, was the result of lobbying from graziers and pastoralists wanting a more efficient way of transporting their produce to the Sydney markets.

The graziers and pastoralists established their own incorporated company to finance the building of the line. It was only later when that company was in financial difficulties that the NSW Government took over the railways in the State. 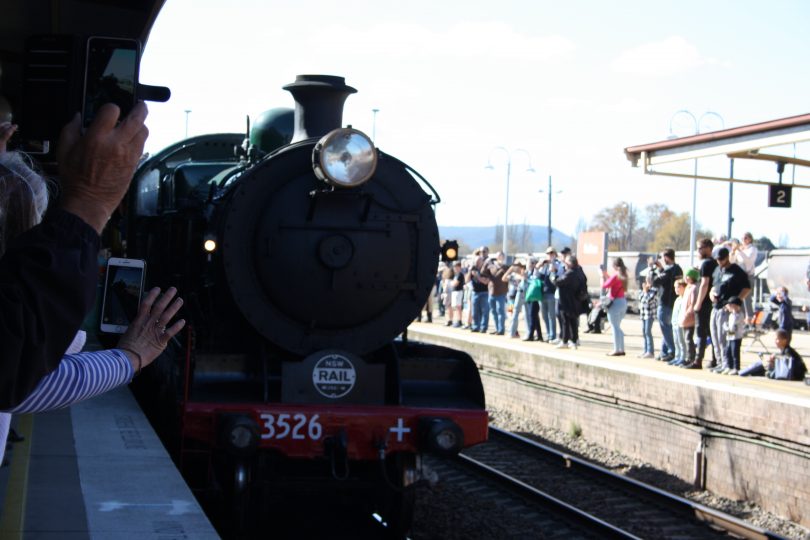 “I’m not a rail nutter but I am a history nutter,” the Governor told a crowded forecourt at the Goulburn Railway Station. “Unless we cherish our past it is very difficult to value the present.”

Governor Beazley stressed the importance of preserving the past before quoting from newspapers of the time and historical records.

“The Chronicle stated that ‘new regions are being made accessible to tourists and the temperature [of these regions] resembles that of England’,” she said.

“…The first trip to Goulburn [from Sydney] was made by a visiting English cricket team two months before the official opening of the line. The team had a scheduled match to play in Goulburn and were told there was a railway that went there. A loco and carriages were found to bring them down. Towards the end of the trip, they needed refreshments and stopped at a pub near the Blackshaw Road Level Crossing to quench their thirst,” she said.

The new Governor, a QC and the first woman judge on the NSW Court of Appeal, made the observation that 150 years ago the Goulburn railway was opened by the then Governor Lord Belmore, with his wife Lady Belmore planting a commemorative Oak in the town’s Belmore Park.

“I’ve brought my husband Mr Dennis Wilson who will be planting the Oak in Belmore Park today.” 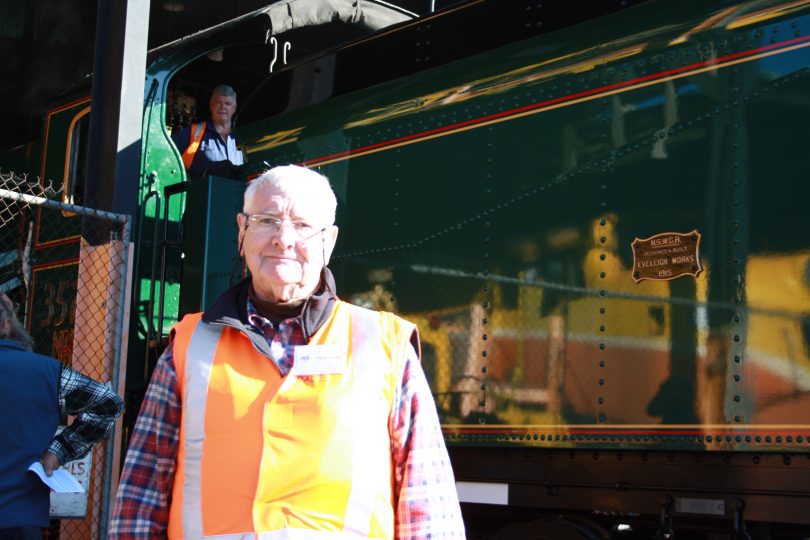 Dale Wake, former steam train driver, relives memories of the railway. He knew around 2000km of the track back-to-front during his driving days.

At its peak, more than 300 people were employed at the railways in Goulburn. One of those employees was local resident Basil Bourke’s father Bill who drove steam engines including the renowned 3801.

“Today brings back memories of my dad,” Basil said.

“He started at the railways as a cleaner and then worked his way up to fireman and then to driver. One of my fondest memories as a young boy was when he stopped his train on the line going to Crookwell, about a block from our house, to pick me up and give me a ride in the engine with him.

“Goulburn is a railway town and there are a lot of stories being told today. 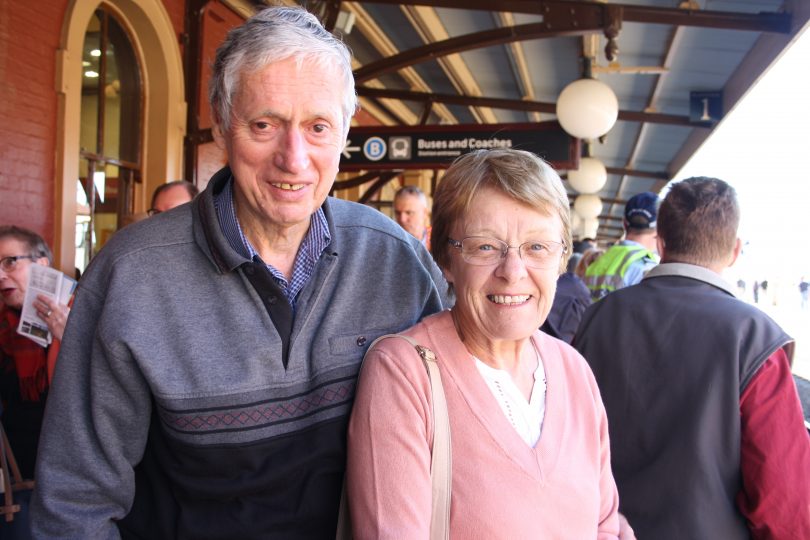 Basil and Aileen Bourke joined the crowd to share memories and celebrate the 150th anniversary of the railway in Goulburn.

Elle Apopei - 23 minutes ago
This is a great idea! And I have seen examples of fenced playgrounds that still incorporate nature and beauty without feeling... View
Elle Apopei - 28 minutes ago
Rebecca Willis View
News 16

JS9 - 47 minutes ago
While there is no doubt that the contracts are unfavourably placed at the moment, its not '3 times the current electricity pr... View
bj_ACT - 2 hours ago
Spot on Chewy. As has been pointed out by a few people over the last year. The ACT government has signed up fixed price 20 ye... View
phydeaux - 2 hours ago
...and remember to take a clear photograph of the meter readings, in case you need to submit a correction. View
News 1

chewy14 - 2 hours ago
Hmmm, I wonder how the government could remove "organised crime" from the equation of selling these drugs? It's almost like i... View
TheSilver - 3 hours ago
Don't really have an opinion on this - don't know enough - but the last two years have made me think the government's positio... View
franky22 - 3 hours ago
Kershaw is a bureaucrat & is saying things that will please his political masters. He did not provide any evidence to support... View
Public Sector 3

jcjordan - 3 hours ago
It is unfortunate but in many ways the APS has lost the battle when it comes to bringing in a wide range of capabilities back... View
Sarah Hassell - 12 hours ago
S550 of the fair work act, doesn't matter how you structure it there is no avoidance. View
Sarah Hassell - 13 hours ago
Its cheaper to have an in-house trained pool of staff that can move with need. I think you can see evidence is increase of la... View
News 2

@the_riotact @The_RiotACT
Cooma's Dr Hamish Steiner has been named 2021 Rural Doctor of the Year after stepping in to help save Bombala's only medical centre https://t.co/4jIMqDz1Vd (1 hour ago)