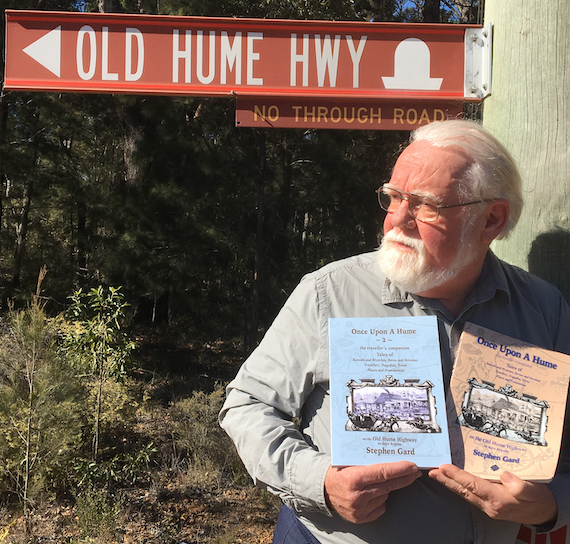 Author of Once Upon a Hume, Stephen Gard. Photo: Supplied.

Stephen Gard reveals the tales and tragedies of bygone heroines who once lived along the Old Hume Highway, from Yass to Bookham, and Bowning to Jugiong, in the latest volume of his book, Once Upon a Hume.

The latest volume is the fourth in the series that travels the old highway – once known as the Great South Road – from person to person instead of from town to town.

In Yass, meet the clever and energetic Mary Yeo who single-handedly researched and wrote her district’s early history. She also founded local branches of the Australian Red Cross, Country Women’s Association and a number of other organisations to assist and encourage Yass’ youngsters.

Mary fought bitterly with anyone who opposed her ideas. She once harangued a Liberal Party conference, declaring that women deserved the same opportunities as men.

The book also introduces 13-year-old Annie Martin. Her letters are a child’s-eye view of Bookham in the 1920s. Annie is a likeable and observant lass from a large family who becomes Bookham’s bush nurse. She once battled through a bushfire to assist with a birth, bringing mother and infant safely back to Yass, with the baby cradled in a suitcase.

Just past Bowning, at Five Mile Creek, Nanno Byrne, redoubtable daughter of an Irish rebel, opened the doors of her Coach and Horses Inn, neglecting little matters such as a liquor licence or paying rent. When a squatter protested and came with police to turn her out, she drove them off with a shotgun.

Then there is the tragic tale of Mary Mathews, found naked and dead in the bush towards Binalong. It was said she removed and carefully hung all her clothing in a sheoak tree, then simply laid down beside a lonely creek and died. Her story is sad and mysterious.

Jugiong boasted the wonderful Hannah McAuliffe, an energetic and beloved teacher who transformed the town’s shabby little school into a showplace where scores of children were proud to attend and eager to learn. But one evening, her life came to a sudden end.

Marian Pilkington of Gundagai North was quite a girl. She was married to a former British army officer and the mistress of 200-acres of prime Murrumbidgee grazing land. So who beat her skull when she was staggering tipsily home from the Traveller’s Rest Inn one night? And what happened to her husband, who disappeared and whose body has never been found?

These and other moving, amusing or remarkable true stories from the region’s past appear in Once Upon a Hume, Volume IV, available here.

Thank you very much for the review of Mr Gards volumes.
Shall start hinting on a Xmas present or two.

Sue Sutton - 31 minutes ago
My Mum has wonderful neighbours who have been helping keep her lawn in check. Thank you Ota and family xx... View
Bill Gemmell - 1 hour ago
Barbara Eglitis I was wondering how long it would take. Seriously, I had the Fowles St Park project in Weston in mind. Sugges... View
Barbara Eglitis - 1 hour ago
Naturally occurring weeds, like the ones growing down the middle of Northbourne Avenue which looks disgusting??? View
Opinion 13

kenbehrens - 50 minutes ago
A few years ago when we were visiting our son in Sydney, there were blankets and items of clothing under shelter on the stree... View
jwinston - 1 hour ago
harcm said “tim_c – what a load of rubbish you talk. What if your schooling was completely disrupted by domestic violence... View
Acton - 1 hour ago
The money you are giving out of misplaced guilt to a street beggar is just funding their drug, smokes and/or booze addiction.... View
News 1

@the_riotact @The_RiotACT
A rehab #clinic specifically designed to assist #COVID-19 patients manage the ongoing symptoms of the virus is being set up at the University of Canberra Hospital https://t.co/WvD1IRUJRf (38 minutes ago)